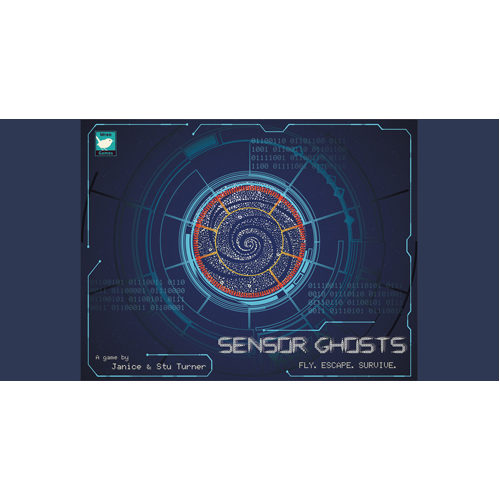 you could earn 2299 victory points

you could earn 2299 victory points

Add to Wishlist
Sensor Ghosts is a cooperative moving maze and hidden information puzzle for 1-4 players. Sensor Ghosts is set immediately after Assembly, however it’s a completely new game and doesn’t require any prior knowledge of Assembly. Story: You have escaped both the virus ridden space station and the clutches of the station’s computer. You must now make your way back to Earth…
Read More
SKU ZBG-WREWGL04 Availability 5+ in stock
Share this
94%

Sensor Ghosts is a cooperative moving maze and hidden information puzzle for 1-4 players. Sensor Ghosts is set immediately after Assembly, however it's a completely new game and doesn't require any prior knowledge of Assembly. Story: You have escaped both the virus ridden space station and the clutches of the station’s computer. You must now make your way back to Earth in the midst of a large meteor storm but something seems to be messing with your sensors and not everything is as it seems. Did you build the ship incorrectly or has the computer somehow got on board and is now trying to thwart your escape? And can you collect a sample en-route to assist with the creation of the vaccine? Navigating through the ongoing meteor storm requires planning, strategic thinking and perhaps even a bit of risk taking, however not everything is as it seems. Working alone or with your fellow escapee, you must use your fuel wisely else you will become stranded in the Earth’s upper atmosphere, or worst, blown up by a meteor impact.

Sensor Ghosts from Wren Games is the sequel to 2016’s cult, sci-fi sleeper hit, Assembly. You don’t need to have played or know anything about Assembly to play and enjoy Sensor Ghosts but do check it out as it is a great game. So how does this sequel, taking place immediately after the events of Assembly stack up?

You begin the game on the voyage home with Earth tantalisingly in reach. All that stands between you and safety is a treacherous, shifting asteroid field that threatens to destroy your ship. Oh, and your sensors are on the blink... And you only have a limited amount of fuel. Oh, and there’s a deadly space virus threatening Earth and unless you collect a sample for analysis, they’ll blast you out of the sky on re-entry... And your ship computer is evil and holds a grudge against you from the previous game, Assembly. Crumbs.

Setup is simple and variable, meaning each game can provide a different maze to navigate. You lay out double-sided ‘sector’ cards in a 5x7 grid. Sectors are either safe (green), warp fields (purple), asteroids (yellow) or certain doom (red). You also lay out five hidden tokens that, when revealed, will be viable virus samples or useless rock. Finally, you will set up a draw deck of action cards specific to the player count and difficulty setting of your game. You’re ready.

Turns follow a simple structure. Play action cards to bolster your shields, scan your environment or move your ship. Sometimes you will need to seek the assistance of your fellow pilots – to change direction for instance. However, there are strict communication rules in place regarding revealing what is in your hand, lest the murderous computer overhear and thwart your plans. Also, requesting assistance uses more cards per action and cards are fuel. Burn through the small deck twice and you will be stranded in the cold dark of space forever. These rules add a fiendish complexity to a game that requires efficiency, forethought and coordination.

Peek Before You Leap

By far my favourite element of Sensor Ghosts is the two-sided sector tiles which create uncertainty and excitement. Due to your glitching scanners, when you move into a sector you encounter the flip side and not the visible side. What looks safe might be a death-storm of hurtling meteors. To help, you can use your scanners to flip or peek at sectors before you make the jump. But this burns cards/fuel and you will only have your memory to guide you. To make things worse, the asteroid field moves after each person takes their turn. So you aren’t just trying to remember where everything is, you are planning where it will be in a few turns time.

At heart Sensor Ghosts is a puzzling maze. One that you must manipulate and traverse carefully for victory. You can’t play this game as a push-your-luck. I tried it that way and failed. Throwing yourself into unknown territory ends in fatal catastrophe. You have to beat the game on its own terms. there are no shortcuts. The design is tight. You will probably lose more than you win, and some won’t like that. I feel it makes the victories sweeter and the game immensely replayable.

Wren Games have done it again and done it even better. Packed into a small box is an accessible but deep and challenging game experience. I was surprised and enamoured by Assembly and I adore this even more. It builds on the sleek, unique design and adds a fluidity and dynamism that ramps up the excitement.

There is something about Wren Games being a small, independent, husband and wife publisher that adds to the experience. Janice and Stu are clear in their promotional materials that they play and enjoy their own games. The sci-fi theme is because they are sci-fi fans. Sensor Ghosts seems born from a place of affection and fun and the consequence is the game feels affectionate and fun.

There is also a great deal of care gone into making the game accessible. The communication rules aid rather than hinder involvement by preventing the alpha-gaming issue that can taint the co-op genre. The design is inclusive, offering writing or symbology to suit your processing style. The character cards have names representing different genders and cultures. The rules have options for people who might struggle with memory, who might be different ages, who might need open communication. If you are colourblind you can use the pictures and symbols on the cards to be able to play. Different difficulty levels to match your ability. I could go on. Little details that show you Janice and Stu genuinely care about who might be buying their game.

Many bigger publishers could learn a lesson here. Sensor Ghosts might be difficult, but it goes out of its way to welcome you in. And what a game to be welcomed in to. I haven’t owned it a week and have played the hell out of it solo and co-op. There is something addictive about it. It might not be as flashy as many other games, but it has rocketed itself into contention for my game of the year.