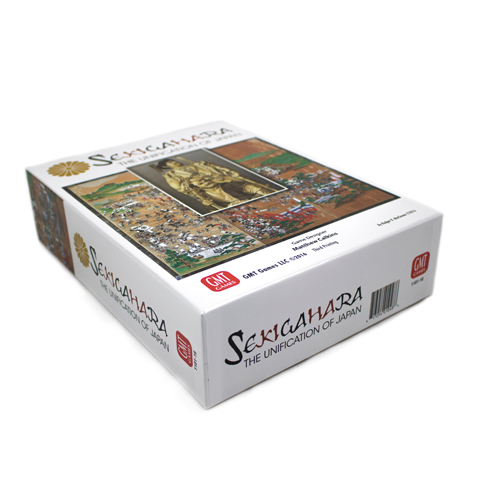 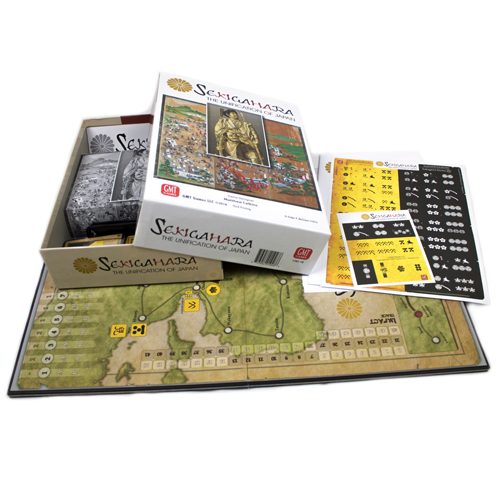 Sekigahara: The Unification of Japan

you could earn 5299 victory points

you could earn 5299 victory points

The battle of Sekigahara, fought in 1600 at a crossroads in Japan, unified that nation under the Tokugawa family for more than 250 years. Sekigahara allows you to re-contest that war as Ishida Mitsunari, defender of a child heir, or Tokugawa Ieyasu, Japan’s most powerful daimyo (feudal lord). The campaign lasted only 7 weeks, during which each side improvised an army and a str…
Read More
Category Board Games Tags BGG Golden Geek, GMT Games, Golden Pear, Podcast Approved SKU ZBG-GMT1101 Availability Restock Expected
Share
Share this
92%

The battle of Sekigahara, fought in 1600 at a crossroads in Japan, unified that nation under the Tokugawa family for more than 250 years. Sekigahara allows you to re-contest that war as Ishida Mitsunari, defender of a child heir, or Tokugawa Ieyasu, Japan's most powerful daimyo (feudal lord). The campaign lasted only 7 weeks, during which each side improvised an army and a strategy with what forces their allies could provide. Each leader harbored deep doubts as to the loyalty of his units - for good reason. Several daimyo refused to fight; some even turned sides in the midst of battle. To conquer Japan you must do more than field an army - you must be sure it will follow you into combat. Cultivate the loyalty of your allies and deploy them only when you are confident of their allegiance. Win a battle by gaining a defection from the ranks of your opponent. Ages 12+, 2 players, 180 minutes playing time.

The battle of Sekigahara took place on October 21st 1600 and resulted in the establishment of the Tokugawa Shogunate. Sekigahara: The Unification of Japan is named as such because this battle ended the civil wars plaguing Japan at that time and unified Japan under the Tokugawa clan.

Sekigahara: The Unification of Japan is a game that allows two players to re-contest the 7 week war that culminated in the battle of Sekigahara. One player will take the role of Tokugawa Ieyasu, the most powerful Daimyo in Japan, while the other will play as Ishida Mitsunari who vowed to defend the 7 year old son of the recently deceased ruler of Japan and therefore next in line to rule.

In Sekigahara each player takes control of an army and wages war against the other. The goal is to either win by controlling more strategic locations than your opponent by the end of week 7, or by killing the enemy leader in battle. The Tokugawa player can also win by conquering Osaka castle and capturing the child heir.

A game of Sekigahara is set up by placing units (represented by blocks) onto the board as directed by the rulebook. Most starting units will begin a game in the same place, however there are a few random unknown placements. The beauty of this is that even an experienced player is never 100% sure which units exist in each location. Partially hidden unit information is a core mechanic in Sekigahara and it is one of the mechanics that makes this game great. A player will always know the size of the enemy armies, just by looking at the stack of blocks, but they are unlikely to know its composition, as the blocks always face away from the opponent.

Every action in Sekigahara is achieved through card play. Each player has their own unique deck of cards that they draw from. At the start of each turn both players must play a card from their hand to bid for initiative, the winner will take their actions first for two consecutive turns. To win initiative you may need to bid a high card, but because everything in Sekigahara is achieved using those cards you may need to save those high cards for actions, this will be the first of many difficult decisions!

During your turn you will decide how many cards to discard to activate armies, the more cards discarded, the more armies can be moved and the more reinforcements can be called, but again this will leave you with fewer cards in your hand to activate units in battle. Smaller stacks can move further, representing the difficulties of manoeuvring large armies Also leader units within each stack can aid movement, representing increased organisation. Armies can be forced to march further by, you guessed it, discarding a card. The map also contains some highway routes that can be utilised for faster army movement. All this adds up to a huge number of options for army movement and positioning.

Once a player has finished army manoeuvers and mustering they must proceed to the battle phase. All locations that contain units from both sides of the conflict must engage in battle. Each player, starting with the aggressor, deploys units onto the field of battle by playing a card from their hand that has a symbol matching the symbol on the block they wish to deploy. This is where careful hand management and forward planning throughout the entire turn will pay off. If you have managed to engineer a situation where you have the cards available to deploy many of your blocks from the stack, then you are likely to win the battle since the winner is decided by adding up the strength of the deployed units from each side of the battle.

However, Sekigahara is a game of hidden information and it is sometimes possible for a smaller force to triumph over a much larger one. For example, you may have noticed your opponent has already played many Mori cards, so maybe now is the time to strike the large stack that you know contains many Mori units in the hope that it is not possible to deploy them. Or maybe you know of two stacks containing Uesugi units and so attack both in the same turn, knowing it is unlikely your opponent can deploy units in both battles.

The fact is, battles are always exciting and are never a forgone conclusion. Every battle you initiate will carry some element of doubt as you double check your cards and units while hoping that your opponent can’t deploy everything they have. However these will not be your biggest concern, the main reason you will doubt your victory will be due to fear of your opponent playing a loyalty challenge. During the battle of Sekigahara many units started on one side of the conflict, but once the fighting started they defected and instead fought for the opposing side.

This is represented in the game by loyalty challenge cards. These cards can be played from your opponents hand immediately after you have played a card to deploy a unit. If you cannot then show another card matching the unit you just deployed then the unit defects and adds its strength to the opposing army.These cards can be extremely powerful if used at the right time and the game is played in constant fear of them. They will make you carefully consider the order that you deploy units and if possible retain extra matching cards just to ensure the loyalty of your troops.

In summary, the gameplay in Sekigahara is very streamlined and a few turns into your first game you will have a good grasp of the mechanics. However this is a difficult game to master. There are a lot of options every turn and to do well requires forward planning over multiple turns and extremely careful management of the cards in your hand. In Sekigahara an experienced player is likely to beat a novice and so for this reason, I would advise starting out with someone else who hasn’t played before if possible.

Sekigahara is a beautiful game. The units on the battlefield are represented by painted wooden blocks, each of these blocks represent around 5000 warriors on the field and each have Japanese symbols or ‘mon’ on them which link them to a specific clan. These blocks look and feel great as they are moved around and they make the board look really impressive with stacks of different heights scattered across the map. The board itself is drawn in the style of an old map showing the relevant area of Japan with all connecting roads and important locations. The board really helps with your immersion into the game, which is a good thing since you will spend a long time staring at it trying to figure the best course of action.

Is this game for you?

If you answered yes to all three questions, then this is absolutely for you. But actually even if you have never played a wargame before this is a good place to start. As I said before the mechanics are not complicated, but there are a lot of decisions to make every turn. I have played many games of this now and never had two games the same.

Sekigahara is one of my favourite games of all time and will probably remain so into the future. Every game is tense and exciting with victory only coming through well executed manoeuvers and careful planning.