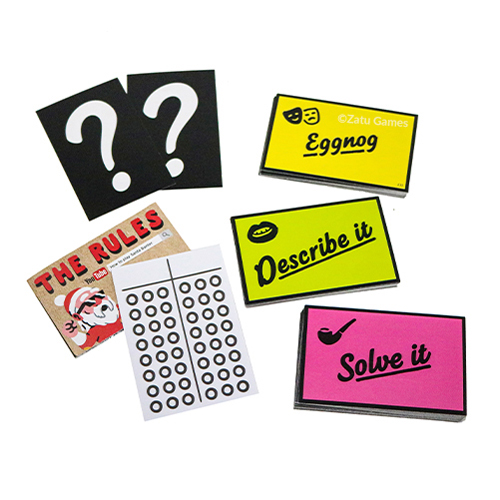 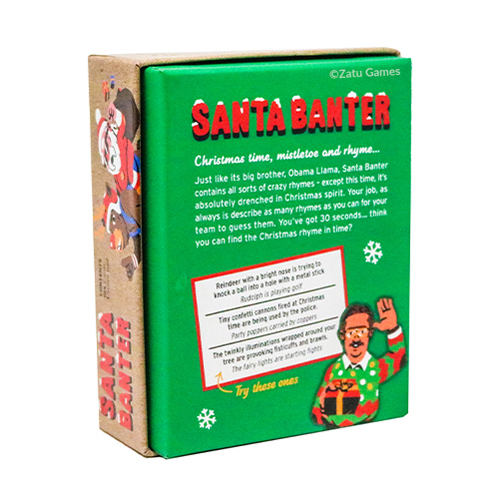 you could earn 759 victory points

you could earn 759 victory points

Just like it’s big brother Obama Llama, this game contains all sorts of crazy rhymes – except this time, they’re absolutely drenched with Christmas spirit. From “Three wise men visiting Big Ben” to “Santa Claus watching Star Wars”. Your job is to describe as many rhymes as you can whilst your team tries to guess them. You’ve got 30 sec…
Read More
Category Board Games Tags 6-8 Years, 9+, Big Potato, Fun for Kids, Podcast Approved SKU ZBP-SB01 Availability 3+ in stock
Share
Share this
74%

Welcome to the rhyming game with the funny sounding name! Just like it's big brother Obama Llama, Santa Banter is full of weird and wonderful rhymes - except this time, they're absolutely drenched with Christmas spirit. From "Three wise men visiting Big Ben" to "Santa Claus watching Star Wars". Your job is to describe or mime these rhymes, with your team shouting out as many as they can. You've got 30 seconds... think you can find the rhyme in time?

It's Christmas time and all is well in the world. You've just finished your turkey/nut roast/beef in my case dinner and you're ready to play a game. But what should you play? If you're not in the mood for anything extremely heavy, like Gloomhaven, or if you have a large family around who want to play, you're probably reaching for a party game. Now, I don't own a huge amount of party games, but there are a couple I keep handy for events such as this. This year, I'm bringing something based in lexicography, where your wit and words are welcome as we attempt to rhyme our way through the haze of a big meal. Today, I present to you Santa Banter by Big Potato games.

The rulebook for Santa Banter is barely a sheet of A4 but if that's too much after a Christmas feast, there is a video you can watch instead. Either way, the rules are suggested to be placed in the hands of those who've had the least to drink (that'll be me in my family…) The objective is to earn points for your team. The more points you earn, the more of the 14 Rhyming Pair cards you can flip over, very reminiscent of Obama Llama. The game is very quick, with each round lasting just 30 seconds per team, and ending when all Rhyming Pair cards are gathered.

The first round takes a card from the green Describe It deck and begins to describe the rhymes on the card without using the words on the card. (I'm assuming words like "is" and "the" are acceptable to repeat.) Round two takes from a pink Solve It card and reads one of the riddles to provide the rhyme. Round three is effectively Charades as the yellow Act It cards are in play. These cards have a name on them which forms the basis of the rhyme that you must silently act out.

For each answer on the cards your team guesses, they score a point on the scorecard. For every line of three you fill in, you get to flip two cards over and attempt to make a match. When they match, you can claim the pair and get to guess again. The team with the most pairs at the end of the game wins.

We had a lot of fun playing Santa Banter, even with a group of five making the teams uneven. This game is quick and easy and I think has the win over the Obama Llama family. If only because I think the most you want to play this is maybe twice a year. That's not a criticism, I think it's an enhancement. Because the game relies on rhymes, miming and solving a riddle, it can be very easy to remember what you did in the previous playthrough, which does impact replayability. But because it's a Christmas game, there's very little incentive to play it any other time of year. This means I'll play it with my family and with my in-laws, get two very different experiences and then be ok putting it back on the shelf until next year.

I do have a slight problem with the winning a pair lets you have another go at finding a pair. If you get lucky, you can ride the chain all the way to the end of the game. Theoretically, you could do this on the first card which means the other team doesn't get to play. Which did happen to me during one of our playthroughs. To stop it happening again, we put in a house rule - you guess the number of times you've earned and that's it. With two teams being the usual amount and an odd number of pairs, this makes the game way more competitive.

Overall, I like Santa Banter. It fills a niche very handily at Christmas, potentially as a between courses game, but certainly something to wind down after a hearty meal. A fun festive fixture for all the family!