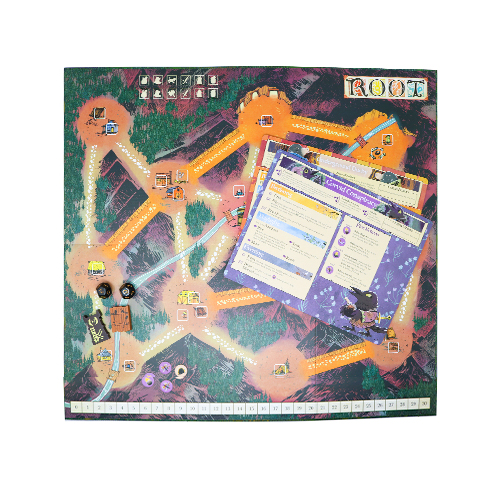 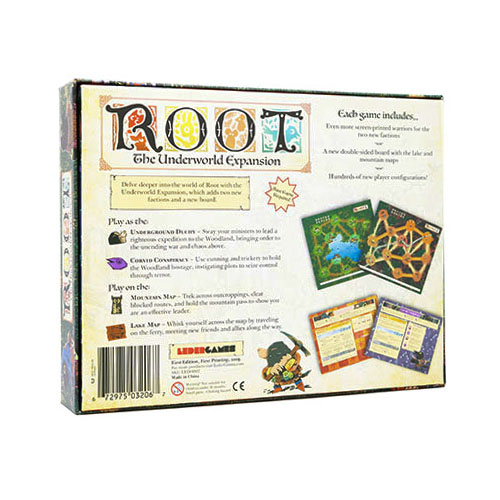 Root: The Underworld Expansion Root is a game of adventure and war in which 2-4 players battle for control of a vast wilderness. The nefarious Marquise de Cat has seized the great woodland, intent on harvesting its riches. Under her rule, the many creatures of the forest have banded together. This Alliance will seek to strengthen its resources and subvert the rule of Cats. In this e…
Read More
Category Board Games Tags Leder Games, Root SKU ZBG-LED01002 Availability 3+ in stock
Share
Share this
90%

Root is a game of adventure and war in which 2-4 players battle for control of a vast wilderness.

The nefarious Marquise de Cat has seized the great woodland, intent on harvesting its riches. Under her rule, the many creatures of the forest have banded together. This Alliance will seek to strengthen its resources and subvert the rule of Cats. In this effort, the Alliance may enlist the help of the wandering Vagabonds who are able to move through the more dangerous woodland paths. Though some may sympathise with the Alliance’s hopes and dreams, these wanderers are old enough to remember the great birds of prey who once controlled the woods.

Meanwhile, at the edge of the region, the proud, squabbling Eyrie have found a new commander who they hope will lead their faction to resume their ancient birthright. The stage is set for a contest that will decide the fate of the great woodland. It is up to the players to decide which group will ultimately take root.

Root represents the next step in asymmetric design. Like Vast: The Crystal Caverns, each player in Root has unique capabilities and a different victory condition. Now, with the aid of gorgeous, multi-use cards, a truly asymmetric design has never been more accessible.

The Cats play a game of engine building and logistics while attempting to police the vast wilderness. By collecting Wood they are able to produce workshops, lumber mills, and barracks. They win by building new buildings and crafts.

The Eyrie musters their hawks to take back the Woods. They must capture as much territory as possible and build roosts before they collapse back into squabbling.

The Alliance hides in the shadows, recruiting forces and hatching conspiracies. They begin slowly and build towards a dramatic late-game presence--but only if they can manage to keep the other players in check.

Meanwhile, the Vagabond plays all sides of the conflict for their own gain, while hiding a mysterious quest. Explore the board, fight other factions, and work towards achieving your hidden goal.

In Root, players drive the narrative, and the differences between each role create an unparalleled level of interaction and replayability. Explore the fantastic world of Root!

The Underworld Expansion adds two more factions and two new maps. The Mountain and Lake provide new battlegrounds to fight to victory on while the factions give you new ways to do so. The Great Underground Duchy mixes the play style of the Marquise and Eyrie factions, while The Corvid Conspiracy are a sneaky faction that plot and plan.

Cute woodland critters and deadly warfare, that’s quintessential Root. Since Leder Games’ release of Root in 2018, the base game and various expansions have quickly soared through the board game ranks. Root: The Underworld Expansion is no exception to this. Designers Patrick Leder and Cole Wehrle have blessed us with more woodland warfare and cute critter conflict. The two new factions were what drew me into backing this Kickstarter. The Great Underground Duchy and the Corvid Conspiracy were the highlight of the expansion for myself and many other players. Other great additions within this expansion include two new maps, new cards, and new vagabond characters. All these extra elements add up to create a fresh experience of the game, even when playing with old factions. In this first impression: quarantine edition, I have only been able to play with the Great Underground Duchy. To play with the Corvid Conspiracy, a group of at least 3 players is recommended for a fair game. This first impression is limited to the play experience of myself and my partner. When normality returns, I will finally be able to reunite with board game friends and join the Corvid Conspiracy cause!

On opening the box, I was immediately drawn in by incredible artwork and high-quality components. Clearly, there is so much detail and love throughout the entire design of the game. The maps, player boards, and cards each have unique and charming artwork. Praise must be given to artist Kyle Ferrin for illustrating this fantastic world! By now, superb craftsmanship and great artwork are recognisable and to be expected from the Root series. The quality of the meeples and various boards is outstanding: sturdy enough that you can be sure this game will stay in good shape after many plays and board game get-togethers.

If you are familiar with playing the base game of Root then you will be able to start playing Root: The Underworld Expansion immediately. The base rules are the same, with only a few new additional rules depending on which new map you play. On a similar note, if you enjoy the base game of Root, then you will almost certainly appreciate this expansion. There are no major changes in the core mechanics of the game. Rather, The Underworld Expansion adds variation and expands on the world of Root.

I particularly enjoyed playing with the new maps. The lake map is very different from previous maps, with a large lake in the centre. This makes mobility an extra challenge. Taking command of the ferry gives you free rein over the lake! This added an extra, fun dimension to the game. Flipping the board over, you will find the mountain map. The pathways of the mountain map are blocked. If you wish to pass through the mountains, then you must spend a card to clear the way. The player who has control over the middle mountain pass gains a victory point per round. Again, this map adds extras here and there which jazz up the game experience.

Card management and building placement are particularly important when playing as the Grand Duchy. Certainly not a complicated faction to play, but still very engaging and fun. Compared to other factions, the Duchy are slow to gain victory points at first. Don’t let this discourage you! By the mid-point of the game I found myself darting between my tunnels and creating almost unstoppable point scoring plays. The Grand Duchy gain points by swaying ministers. To sway a minister, you must match your suits of cards to the clearings you control and have built within. Less influential ministers allow you to take extra actions, whilst more prestigious minsters grant you victory points. Point scoring ministers may generate points every round per particular type of building on the board,or by discarding any number of cards of the same suit to score that many victory points.

My only difficulty with the Grand Duchy is that, without any swaying ministers, their actions are limited to two per round. This really isn’t enough when you have markets to make and enemies to slay. So, swaying ministers that grant extra actions is advisable from the start! After playing a few games with the Grand Duchy, overall, I found them to be very versatile. They can be aggressive, with hordes of mole warriors spread out across the board, or they can be played peacefully, crafting in a few places and swaying lots of ministers in a secluded area.

My problem with the Underworld Expansion is that  neither of the new factions is balanced to work in a 2-player game. I was super excited to play the Corvid Conspiracy. Sadly, I will not be able to get a group of friends together to enjoy the full game experience any time soon. Those sneaky looking corvids are calling to me. More often than not, Root is best enjoyed with at least 3-4 players. It may be advisable for boardgamers to hold off playing this expansion until reunited with boardgame friends and family. Right now, it would be particularly useful to own the Clockwork Expansion, which adds multiple bot players. Playing Root: The Underworld in a 2-player game is still fun. I enjoy playing this game with my partner often. Despite not being able to play one of the new factions, I still really enjoyed using new maps and cards. If you desire a fresh experience of the core elements of Root, I would highly recommend picking up Root: The Underworld Expansion.