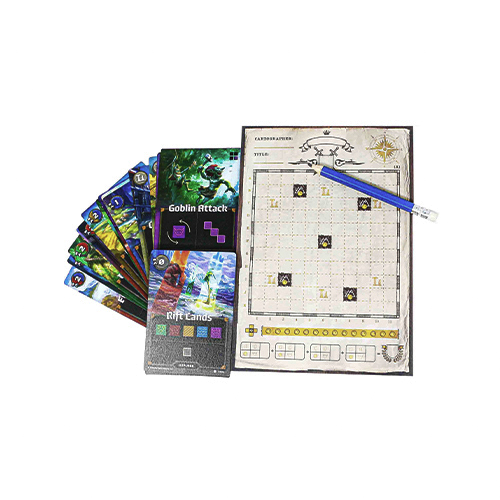 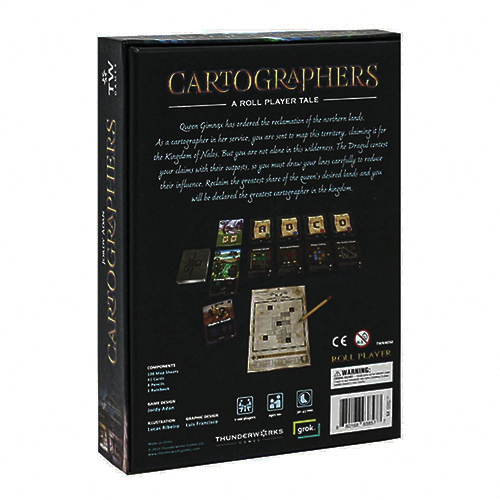 CartographersRoll and Writes are 10 a penny so it takes something special to stand out. Some games do this be changing the ‘roll’ of dice to a ‘flip’ of a card. Cartographers is one of those flip and write games. Set in the Roll Player universe you will be mapping out a region of that world.Each player will take a sheet with a grid on it. Across the grid are ruins and mounta…
Read More
Category Board Games Tags Best Sellers, Roll Player, Thunderworks Games, Zatu Gold Award SKU ZBG-TWK4050 Availability Restock Expected
Share
Share this
80%

Roll and Writes are 10 a penny so it takes something special to stand out. Some games do this be changing the ‘roll’ of dice to a ‘flip’ of a card. Cartographers is one of those flip and write games. Set in the Roll Player universe you will be mapping out a region of that world.

Each player will take a sheet with a grid on it. Across the grid are ruins and mountains and possible a massive canyon, depending on the difficulty chosen. You will then set up the cards for the current season. The four seasons you play through get progressively smaller - in theory, so you will need to make forward thinking decisions from the off. To score points you must collect coins, and achieve goals. Four goal cards are laid out but only two are scored each season. A & B, then B & C, then C & D, before D & A. This means each card will score twice and that you know when they will score, allowing you to plan ahead. Of course most games you will get lost in a couple of the objectives, forgetting the ones you were meant to concentrate on this round!

Each turn a card is drawn given you a shape or two to choose from and a terrain or two also. You will each sketch one of these terrain/shape combos on to your map, anywhere you like. Depending on the scoring cards you might want to cover ruins or place next to mountains or near the edge of the board.

Monsters add a touch of interaction to proceedings. When one appears you hand you sheet to another player who draws the monster on to it. Cartographers may not sound like it, but it’s a engrossing and engaging game that you’ll come back to time and time again.

Cartographers is a one to many player roll (or flip) and write game from designer Jordy Adan and published by Thunderworks Games. In Cartographers players will flip over terrain cards. Each terrain card will show a land type or two.As well as a shape (or two) which must be drawn a players map sheet. The game's played over four seasons and each season ends when a certain threshold is met. At the end of each season, certain scoring cards are triggered. Each season a monster card is added to the deck. When these are revealed all players pass their sheets to another player who then draws the depicted shape on their opponents sheet.

Queen Gimnax has ordered the northern lands to be reclaimed in the name of the Queen. As a Cartographer in her employ you have been sent to map the territory. The Queen, however, has favourite lands that she likes the most. You will increase your standing and favour with her by meeting her demands.

You are not alone in the wilderness however, The Dragul will nip at your heels and content your claim on the land with their outposts. Map out the most territory to meet the Queens demands and reduce the influence of the Dragul to be declared the greatest cartographer in all the kingdom.

There are four scoring cards with two our of the four being scored every round. Each card is scored twice per game. Players can also acquire points for gold coins earned. They lose points for monsters that are not surrounded by other terrain types. At the end of the forth season, all players tally up their points and the one with the most points is the winner.

I love a good roll and write. I love how quick and accessible they are. However, sometimes you want something with a bit more too it. Something that gives you meaningful choices and more replay-ability. Cartographers delivers.

Cartographers can accommodate a large group of people. As long as they can see the terrain cards and the scoring cards then you can have as many people play as you have sheets. The games doesn't bog down with higher player counts as everyone is drawing from the same flipped card.

I really like the way that each card is scored and how you can see what is being scored this round and the coming rounds. You know that each card will be scored twice. So you can plan for the next round or even the round after that by foregoing the current round scoring. Or you can try each round to get as many points from the current rounds scoring cards. It gives players options and decision points throughout the game. There is a decent enough stack of scoring cards but I think after a lot of plays these might become a bit repetitive. An expansion with some different ways to score could mix it up and keep the game fresh.

The player interaction is higher in this Cartographers roll and write than in a lot of other which tend to be multiplayer solitaire. However, it is not too punishing, you don't feel like you are being attacked as such as nothing is being taken away from you. There is just another terrain type to have to deal with and surround. I really like how Jordy Adan/Thunderworks Games have approached this.

Although a bit meatier than other roll and writes it is still easy enough to understand, learn and teach new players. Gamers and non-gamers alike can get in to the game straight away without much explanation. The scoring cards are easy to understand and for the most part clear. Although the text on the cards is a little small to read form afar, especially if playing in large groups. In most instances they can be easily explained and then the symbology relied on.

The map sheets are also double sided. One side is a normal map with the reverse side containing a cavern in the middle, restricting your available space and thus making it more difficult.

All in all, Cartographers is a great roll and write that adds something to the genre than just another generic roll and write. The scoring cards, the round scoring and the player interaction all make this game stand out from the crowded market.