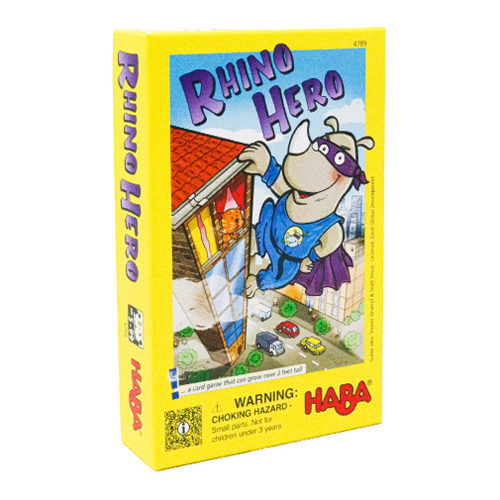 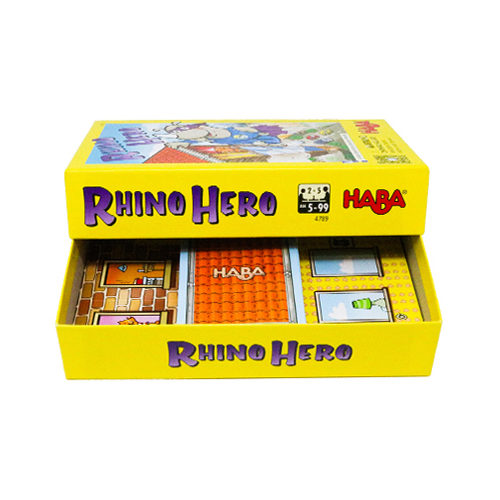 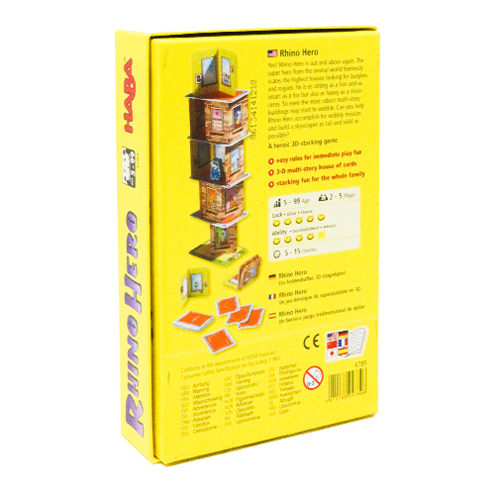 Add to Wishlist
Rhino Hero is about a heroic rhinoceros, clad in a cape and cowl, trying to scale a skyscraper! (If that hasn’t grabbed your attention, nothing will.) Technically this is a children’s game by hugely popular publisher HABA, but don’t let that put you off. While you can – and will – enjoy this with children of all ages (realistically aged five and up, for them to grasp the d…
Read More
Category Board Games Tags Best Sellers, Dice Tower, Fun For All the Family, Fun for Kids, Haba, Pick Up and Play, Rhino Hero, Scott Frisco, Steven Strumpf, Stocking Fillers SKU ZBG-HAB4789 Availability Out of stock
Share this
75%

Rhino Hero is about a heroic rhinoceros, clad in a cape and cowl, trying to scale a skyscraper! (If that hasn’t grabbed your attention, nothing will.) Technically this is a children’s game by hugely popular publisher HABA, but don’t let that put you off. While you can – and will – enjoy this with children of all ages (realistically aged five and up, for them to grasp the dexterity concept), it’s also guaranteed to be a smash hit with the adults, too!

You’ll find a familiar blend of mechanics present in Rhino Hero: dexterity tower-building found in Jenga, alongside simplistic hand management found in UNO. The aim here is to build a tall apartment building. Each player has a hand of roof cards, with a bird’s eye view of a wall structure on them. There’s also a deck of foldable cards (that’s right: cards that actually fold!), which represent the walls.

On your turn, you have to obey the previously placed roof tile. Look at where it says you have to place walls; fold the wall cards and balance them on accordingly; then place your own choice of roof card on top. All while holding your breath, of course, because you don’t want that rickety tower to collapse… That loses you the game! You’ll win, however, if you can get rid of all of your cards, or have the least remaining once – when, not if! – the tower tumbles down.

There are also some symbols on the roof cards that come with an associated action, such as miss a turn, reverse turn order, next player picks up another card (or one that just benefits you, because it allows you to place an additional roof card that turn, thus thinning out your hand that little bit quicker). These add a touch of spice into the mix that elevates (ahem) Rhino Hero above the likes of Jenga. You feel the betrayal, or witness the next player wincing as they realise what card you’ve just placed.

Oh, and we’ve saved the best until last. Rhino Hero comes with its eponymous hero in the form of a grinning rhino meeple – brilliant – and if your roof card has the rhino symbol on it, the next player has to move the rhino onto that roof card’s symbol!

It’s easy to see now how Rhino Hero appeals to everyone. Kids love the challenge, and almost thrive on having to move the rhino. Whereas adults, whether playing in the pub or once the little ones have gone to bed, will pull the most outrageous faces as they desperately attempt to concentrate, while the engrossed, watching crowd cheer their every move.

HABA have long been experts in creating exciting, fun, learning games for children. Rhino Hero first and foremost teaches children basic hand management and dexterity skills and patience. But it does more than that, because it’s one of the most perfect party games out there for adults, too. If ever there was an ice-breaker in a box, Rhino Hero would be it.

Rhino Hero is the extremely popular prequel to Rhino Hero Super Battle. Created by the innovative HABA company, this game is the modern-day Jenga with a far better theme and lots more interactivity, making it a fantastic first step into the new-era of “board gaming.”

This game is suited for anyone over five and the ideal number of players is between two and five, making it a fantastic family game that offers something to every generation. It’s also incredibly quick fire, taking between five and 15 minutes, meaning even those with the shortest of attention spans will be able to stay engaged and involved.

Don’t let the little yellow box fool you, minimal components do not make for minimal fun! Inside you will find a proud little Rhino figure donning a cape and mask, 31 roof cards (action cards), 28 walls (to build your towering apartment block) and one double-sided foundation card (your starting point).

Our Rhino Hero, the loveable town-vigilante, must scale the building to keep an eye out for any criminal activity or wrong-doing occurring in the area. For him to do so, the building that you and your fellow players put together must be sturdy and tall – a tricky combination.

Each player starts the game with five cards, unless there are only two of you in which case you start with seven. Your hand is made up of roof cards only, with each one having a different action on it that, once played, affect the game in some way. The wall tiles remain in a draw pile to the side which should be taken from at the beginning of each players turn.

The double-sided starting tile should then be placed: the side showing the two wall placement lines is your easier option, the side showing only one can be used for a more competitive family shootout or by those up for a challenge.

The first player correctly places walls on the guidelines provided on the start tile. From here, they choose a roof tile from their own hand to give the next player their platform to test their steel. If this roof tile is plain, the next player goes ahead as before. However, if there is a symbol on the roof card, it may affect the next player's turn.

A purple arrow marks a change in direction, meaning the order of play changes, a blue exclamation skips the next victim, a green “+1” means the next player has to draw a further roof tile, a red “2x” means that the player who originally put the tile down gets to put a further roof tile on the stack and the black rhino means the rhino-figure must be moved and placed on this spot in the building without collapsing the entire stack.

There are three possible ways to win Rhino Hero. The first is when a player uses their last roof card and is therefore out of cards. The second, and probably most likely, way of winning is if someone knocks over the stack and you have the fewest cards left in your hands. The third and final way is if the walls have all been used and their draw pile is empty – then you all get to win which, for the competitive among us, is not the outcome we want!

In all honestly, when my partner came home with Rhino Hero, I was less than enthusiastic. “It’s childish” I protested, “the parts will be naff, they probably won’t even stack!” I wailed. But as we unboxed it, set it up and read through the very easy instructions, I started to change my mind. We played it with two players, then we played it with a 14-year-old, then we played it with his 80-year-old nan and every time I genuinely enjoyed it more. It’s actually really, really good fun.

If you’re looking for a game that is made well, with illustrations that will make you smile and a premise that is easy-to-learn and easy-to-teach then this is a great starting point. It’s difficult to find a game that keeps all the family engaged these days – there’s so many distractions with social media and technology on demand that sitting kids down for anything longer than half an hour is a task, but with Rhino Hero you can set-up, play and declare a winner in well-under 15 minutes.

It’s engaging, it’s funny and it’s surprisingly a lot trickier than you might think. A great game to warm-up a board game night with or just to play before your Sunday dinner, and at under £10 a welcome addition to your growing collection.

Is it going to enthrall those of us who are more tactically minded and want to feel like we’ve worked a bit harder for our victory? Probably not, nor is it going to be a game that you revisit for its own replay-ability and depth. The quirk of this game is in its humour-inducing ability, not in its own greatness. It is one-dimensional and is better played with a few of you. It also requires a level surface with no surplus movement – a fan the other end of the room or an un-even table will cause you problems – which makes it limited in where and when you can play it.

For me, this is one of my 'lazy games' – when I know we’ve got people coming around and I’m not feeling at my most sociable, or when there’s a bit of a wait on the dinner and I’ve got an irritable teen and an interfering Nana, I’ll look to Rhino Hero to entertain them (and me) for a short space of time.

It’s a good laugh, it’s endearing and above all else, it's simplicity is its genius and I for one think it’s a really solid buy.