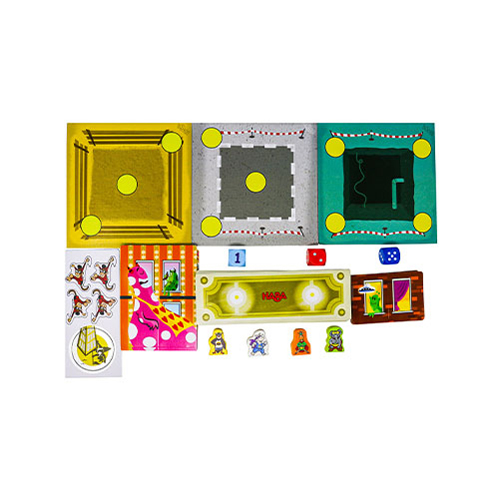 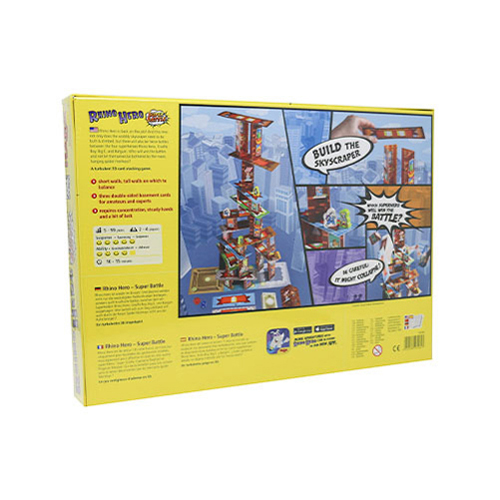 Pay in 3 interest-free payments on eligible purchases. Learn more
Success! We will let you know when this product is available again.
Your email address has been unsubscribed!
Your email address has been unsubscribed!
Notify me when this product is available to purchase!
This email address is already subscribed to this product!
Rhino Hero: Super Battle is the mischievous, bigger sibling to HABA’s smash hit, Rhino Hero. Once again, it’s a tower-building dexterity game – but this time it’s more of a scrap to see who can get their own heroic animal to the top of the skyscraper before it tumbles down! Up to four players compete as loveable caped super-creatures: Giraffe Boy, Batguin, Big E the elephant…
Read More
Category Board Games Tags Golden Pear, Haba, Podcast Approved SKU ZBG-HAB302808 Availability Out of stock
Share
Share this
85%

Rhino Hero: Super Battle is the mischievous, bigger sibling to HABA’s smash hit, Rhino Hero. Once again, it’s a tower-building dexterity game – but this time it’s more of a scrap to see who can get their own heroic animal to the top of the skyscraper before it tumbles down! Up to four players compete as loveable caped super-creatures: Giraffe Boy, Batguin, Big E the elephant, and, of course, Rhino Hero. All characters start on the ground floor, and together you’re going to build a tower by folding playing cards of various heights and placing structural cardboard roof segments. The winner is the player who is highest up the skyscraper when it eventually falls – providing they weren’t the player to cause said collapse… There’s an element of hand management at play. Each turn you pick a roof card from your hand and that determines which height and how many walls you have to place, (or if you have to add extra hanging monkeys to the tower). Then you balance said roof card on top of the walls. Players start by placing walls on the designated foundation points on the ground, but unlike the solitary vertical tower in Rhino Hero, in Super Battle you’ll end up erecting a unique, skittish, almost L-shaped building. Roof card placed? Now you roll a movement die, and move your character up (or down) that number of storeys. But the rival heroes don’t like being on the same floor as each other! If this occurs they have to ‘battle’, using dice. The hero that moved rolls the red die with even numbers, and the defender rolls the blue die with odd numbers. Highest gets to stay on that floor, while the other has to slink back down a storey. This could, in turn, cause another battle in quite the chain-reaction! (Top tip: roll your dice away from the tower, not towards it – we learned this the hard way). You’ll end your turn by drawing back up to three roof cards in your hand. Players can pick from the two face-up cards, or draw blind from the deck – so there is a touch of strategy involved. HABA have long been experts in creating exciting, fun, learning games for children. Rhino Hero: Super Battle is guaranteed to entertain younger family members, but it translates superbly to competitive adults, too. You’ll screech, wince and cheer throughout every shaky card placement and dice roll-off, no matter your opponents’ age. HABA rightly print on the box that this game can be enjoyed by anyone, aged 5–99, and we thoroughly agree. If you love dexterity classics like Jenga, then Rhino Hero: Super Battle absolutely deserves a spot among your board games collection. Player Count: 3-4 Time: 10-20 Minutes Age: 5+

Building your way to success!

The rules to Super Battle are so deceptively simple that even your pet dog will understand them, although dogs don’t have thumbs so probably best not to play this with your dog…or any animal really.

ANYWHO! Similar to nearly every dexterity game on the market, Super Battle asks players to build a tower/skyscraper by placing walls and floors. You get to play as one of the four heroic heroes: Rhino Hero (Obviously), Giraffe Boy, Big E. and Batguin.

On a turn, players will add either tall walls or short walls to a dictated by a floor piece that has already been played. You may also have to add a dastardly spider monkey to the construction! Then you will add your own floor piece for someone else to build on.

After which, you will then roll the dice, and like King Kong himself, leap from floor to floor potentially conflicting with other players and engaging in a SUPER BATTLE! There is a defence dice (with all the even numbers) and an attack dice (with all the odd numbers). Both players roll their dice, highest number wins! Lowest number has to painstakingly remove their piece from the floor and as if holding a new born baby for the first time and place it gently onto the floor below.

Oh, if you knock the construction down you lose…that’s quite important so try not to. Whichever animal is highest when the tower is knocked down is the winner!

Okay, I will level with you. Start scratching away at the surface and you’ll realise the theme here is thinner than an old person’s 50-year-old handkerchief. Why are these animals climbing the building? Why are spider monkey’s evil? Why are the heroes fighting each other!? I just don’t know! But, never fear, because this is the best part of Super Battle.

It. Doesn’t. Matter. When playing Super Battle, you’re not going to get yourself caught up in an engrossing story or deep, brain burning decisions. Instead, you will be blessed with the sound of laughter and mockery as your friends attempt to master their trembling fingers by placing a piece of card on top of another pile of wobbly waving wonky cards.

Super Battle emulates the perfect crescendo; a smooth and circumspect event but as the skyscraper grows, the tension begins to build until the grand finale of everything toppling over and exploding like a firework of urban landscape.

Yet – yes there is always a ‘yet’ – those of you who are firmly cemented into the board gaming world will have noticed a startling problem. To win the game, you are relying on dice rolls. I know, it’s like a dagger to the heart. This is the major problem with Super Battle. If you can look past this issue, it is a joy to play.

Super Battle’s glaring yellow box is so bright you need sunglasses whenever you walk into the room. It’s like a smack in the eyeballs. However, every inch of artwork and design is positively overflowing with positivity. Whilst the artwork on the walls is incredibly well-thought (brick walls on the outside, decoration and rooms on the inside), the highlight are the meeples. Just look at how adorable these are!

The walls as well! The walls are made out of high-quality card which after many play throughs, simply refuse to fray and crease horribly.

Whilst all these intoxicatingly bright colours are a feast for the eyes, it has ignited some of the more interesting debates I have had in my life. Endeavouring to convince people to play what essentially looks like a children’s TV show is more problematic than I thought.

‘If you’re up for a laugh we could play Super Battle?’

‘No it’s really good I promise!’

‘It’s like a children’s game, but it’s really for adults’

‘I’m not playing a children’s game now untie me!’

Anyway. Super Battle is the ONLY dexterity game I own and pops out whenever we have friends, family or muggles round and the reaction has always been the same. The house fills with laughter and cheer which no other game in my personal collection manages to achieve.

Easy, simple, fun and well designed. If you want a thematic experience then go away. Have they gone? Good, now, Super Battle is charming and hilariously fun. If you want to kick back and laugh with others, this is the game for you and at a seriously competitive price! Should you buy Super Battle if you already own Rhino Hero? Yes. Bin Rhino Hero, and purchase Super Battle!

Time to Build and Climb

The first player consideration is likely to lead to interesting discussions….the player who is the best climber can start! They make their move which consists of six action points:

Let’s look at each of these action points in greater detail:

The player selects one of their floors to add to the skyscraper. The symbols on the cards are very clear and indicate whether small wall(s), large walls(s) or both types should be taken and set-up before the floor card is place on top.

If the floor card just placed has a monkey symbol on it, then you must take a spider monkey out of the stockpile and hang it on the card just placed by its tail or its hand. If nothing collapses, move on to the next action point.

Roll the light blue die. The number rolled indicates how many floors your superhero can be moved up the skyscraper.

If you moved your superhero to a new level, check if there is another superhero on the same floor. If so, you will engage in a Super Battle! As the attacker, you will roll the red die and your opponent will roll the blue die. Both players throw their die at the same time, the player who rolled the higher number wins and stays where they are, the losing player moves their superhero down one level.  If the loser ends up on a floor with another superhero, a new super battle commences!

Take the superhero medal if you are higher up the skyscraper than any other player at the end of the turn.

The game ends when a player partially or completely knocks down the skyscraper. At this point, the player who has possession of the superhero medal is declared the winner of Rhino Hero Super Battle! The exception to this is if the player who has the medal is the one who knocked down the skyscraper. If this is the case, all of the other players are declared join winners!

A Game for all Ages

The game box states that Rhino Hero Super Battle (designed by Scott Frisco and Steven Strumpf) is suitable for 5-99-year-olds. What’s amazing about this game is that not only are people of all ages capable of playing the game but the rules contain great ways of allowing younger players to stand a chance of winning against older players. These include:

Rhino Hero Super Battle is an amazing game! I’ve laughed and shouted playing this game more than any other in my collection. If you make use of the variations for younger or less able players then you can be laughing and enjoying it with anyone!