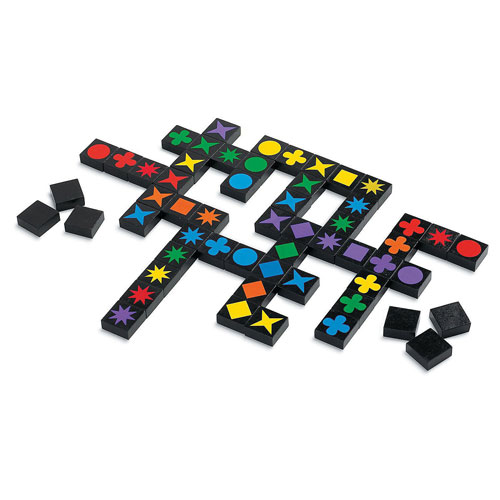 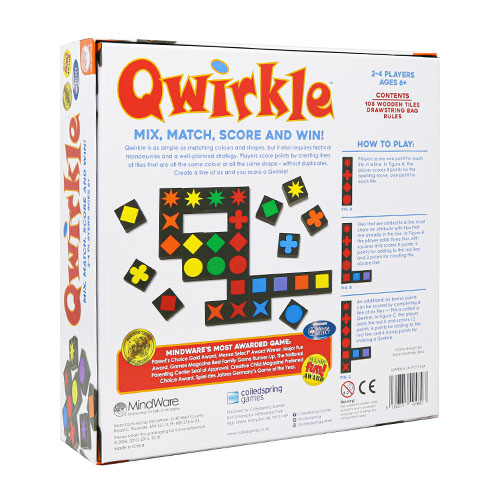 Qwirkle is an award-winning puzzle game by Mindware. It’s quick to learn and quick to play but there is also plenty of room for tactical manoeuvres and well-planned strategies. Can you match enough colours and shapes to beat your opponents? The game is made up of 108 wooden tiles with six shapes in six colours. Players collect points by placing tiles of the same shape or colou…
Read More
Category Board Games Tags 6-8 Years, 9+, Fun for Kids, Mindware, Spiel des Jahres, The Green Board Game Co, The Green Board Gaming Company, Zatu Silver Award SKU TGBCO-10015 Availability 3+ in stock
Share
Share this
75%

Qwirkle is an award-winning puzzle game by Mindware. It's quick to learn and quick to play but there is also plenty of room for tactical manoeuvres and well-planned strategies. Can you match enough colours and shapes to beat your opponents?

The game is made up of 108 wooden tiles with six shapes in six colours. Players collect points by placing tiles of the same shape or colour in a line. You'll score a point for every tile in a line, but there are bonus points up for grabs too! Complete a line of all six shapes or all six colours and you'll earn a whopping 12 points! This is called a Qwirkle.

Are board games more fun the more complicated they are?

This is a conversation a few other Zatu bloggers and I had one evening. Don’t get me wrong, we are all a sucker for a good theme. Sometimes it’s really good to immerse yourself in a heavy, euro-style game. However, a lot of the time, you want a game that has few rules. You also want those few rules to be watertight. You want a game that takes no time to set up and put away. You want a game that caters to a range of experience and abilities. If this is what you want, I may have a suggestion for you.

When Life Gives You Qwirkle, It Outsells Lemonade

I’ve had a copy of Qwirkle for a few years now. Up until about two years ago, it was one of about three board games I possessed. Qwirkle is actually a Spiel des Jahres winner from 2011. Not only is it prestigious, but it has also sold over 4 million copies worldwide… 1.5 million more than Lemonade by Beyonce.

Qwirkle is a 2-4 player abstract tile-placement game by Mindwire. The aim of the game is to make rows of up to six tiles. You are aiming to make rows that either match in colour or shape. Each player has a hand of six tiles, which are hidden from the other players. To start with, each player says how many tiles they’d be able to play in one go. The person who can make the longest row goes first. Once you have taken your turn, you take tiles from the bag and restock your hand. The game then continues to go around until the bag is empty and one player has used up their tiles. The person with the most points wins the game. This game sounds simple because it is, but don’t let the simplicity fool you too much.

What Qwirkle lacks in components, it makes up for in strategy. If you are making a row of shapes, you can’t duplicate shapes of the same colour. If you are making rows by colour, you can’t duplicate the same shape. You get a point for every tile in the row you’ve built on, as well as any new rows you may have created. If there is a row of six, that person declares they’ve made a Qwirkle and gets six bonus points.

Not knowing what each player has in their hand makes you second guess yourself multiple times. Do you risk adding a fourth or fifth tile to a row? What if someone makes a Qwirkle and gets a bonus? Will I win if I keep playing it safe? In truth, not being able to see your opponents’ tiles does mean analysis paralysis can creep in. This in turn can really slow the game down.

A Night On The Tiles

As I’ve mentioned before, Qwirkle is very low on components. It’s a bag full of tiles. The tiles are robust, and the patterns are different enough to not be confusing. There’s no playing board, so all you need is a reasonably big surface to play on. I would advise using a playing mat rather than a tabletop. The middle of the board can become quite congested, and tiles can easily be knocked out of place. A game can be set up in literally seconds. Not only does it mean that Qwirkle is a great game to play, but often you’ll want to play again straight afterwards. Qwirkle really is a terrific gateway game for people who want to give the hobby a go. It’s also a fantastic option for more casual gamers too.

The thing that makes Qwirkle an excellent gateway game may also put more experienced gamers off. There are no extra levels to the game and the scoring is cumulative. Using Ticket to Ride as an example, the scoring of tickets at the end means there’s an element of suspense all the way through. You don’t get that suspense with a game of Qwirkle. What you see is very much what you get. This can cause people to lose interest if they can see one player scoring big and storming ahead. At the risk of sounding super critical, I also think there is a slight lack of finesse in the Qwirkle box. I often agree that less is more, but Qwirkle could give me a little extra. I would love something more, like the individual scoring cards like you have in Azul. Maybe even a little pad and pencil rather than having to find your own.

At the start of this review, I asked whether more complex board games are always more fun. My answer would simply be no. Games are not always better if they’re more complicated. Exhibit A: Qwirkle. If I told you the game takes a minute to set up, I’d be overestimating by about fifty seconds. The rules are easy to follow, and the examples in the book make it easy to teach. This doesn’t take away from the depth offered by a game of Qwirkle. It’s both fun to say and fun to play. Besides, if Qwirkle is outselling Queen Bey, they must be doing something right.