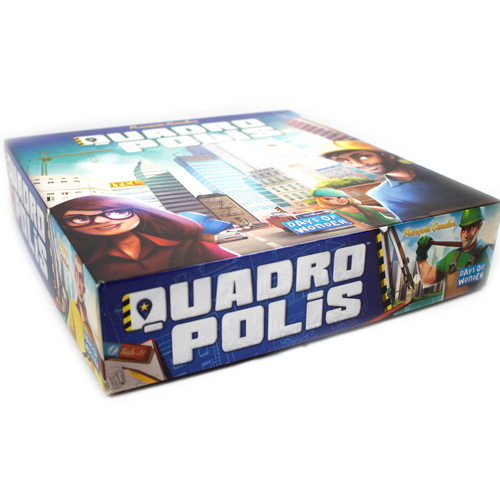 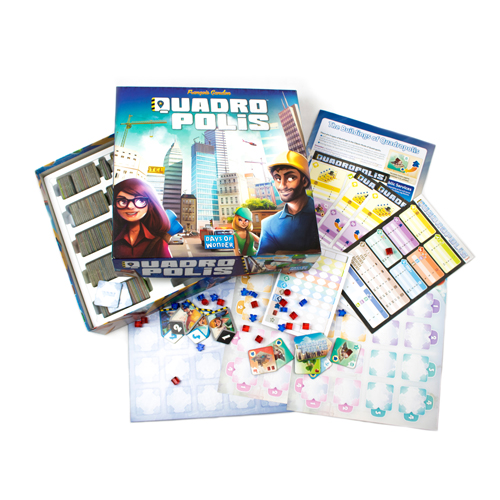 RRP: £37.99
NOW £28.03
RRP £37.99
Earn 2803 Victory Points
Success! We will let you know when this product is available again.
Your email address has been unsubscribed!
Your email address has been unsubscribed!
Notify me when this product is available to purchase!
This email address is already subscribed to this product!
After a hard day?s work you take a break to admire your city through the large windows of your office? at this hour most of your citizens are going back home heading for the tall buildings that you see in front of you. Some others are still wandering in the parks and gardens with their kids and others decided to go shopping in the new mall that you opened a few weeks ago. In the dis…
Read More
Category Board Games Tags Days of Wonder, Golden Pear SKU ZBG-DOW8501 Availability Out of stock
Share
Share this
84%

Quadropolis is a fantastic family-weight strategy board game from respected publisher Days of Wonder. Up to four players take on the role of city planners and architects. Which apartments, shops, factories, harbours or parks will you construct, and where?

Games of Quadropolis last for four rounds, featuring a blend of hand management and tile placement. At the start of each round, you’ll populate a central board (a 5x5 grid) full of tiles. These are all manner of different buildings that you could place within your city. Each type of building has its own end-game scoring pattern. You’ll need to spin a few different ‘set collection’ plates!

Each player has four architects, numbered 1-4. On your turn, you’ll place one architect around the central board, next to a row or column of your choice. You’ll then take the tile as far into this row or column that equals the architect’s number. (The second tile in for the number 2 architect, for example.) A token jumps into the now-empty space on the board. You’ve now blocked the next player from taking any tiles from that row or column. They’ll have to pick a different row or column, claim the tile, and the token moves again…

Then, you have a decision to make. If you claimed a tile using that number 2 architect, you have to place this building in your own city player board. It has to sit in either the column or row that matches that number, or in the same-numbered ‘district’. Or, if it’s a residential building, it can to sit on top of that tile, if the number equals the storey height.

After you’ve placed a few tiles and opponents start to block the main board, available slots begin to disappear. It’s time to put on that thinking cap, mayor, if you want to score the big points!

There’s ‘Classic’ mode (a gentle introduction to Quadropolis) and ‘Expert’ mode. The latter is exactly the kind of pattern building puzzle that board game fans thrive upon! High player interaction? Lots of key decisions to make? A handy-dandy box insert for setting up the game? There’s a lot to love about Quadropolis.

In the first of a regular review series we take a look at the Quadropolis board game - the latest from renowned publisher Days of Wonder. I sat down with a couple of my friends to play a few games of Quadropolis over the weekend.

When playing a new game, there are several ways things can go. The first is 'smoothly': a group of experienced gamers grasp the rules in a heartbeat or several and play with clean, cold strategy. The second is 'completely wrong': everyone struggles to get their heads around the rules and the whole thing feels like being stuck in traffic. The third relies on a phenomenon I'll call a 'lightbulb moment': every player stumbles through the opening minutes of the game, knowing roughly what to do but not why to do it and then, suddenly, it all makes sense to them. Their moves become calculated; they start taking in the moves made by those around them; they try to win.

The Quadropolis board game falls into the 'lighbulb' category. A game lasts four rounds, and for us (myself and two others I'll call 'E' and 'K' for the important sake of anonymity), the filament lit up at the end of the second. The game tasks each player with constructing a city using buildings from tiles on a central 'construction site'.

To do so, they place one of their 'architects', numbered 1-4, by a row or column of the site, allowing them to take a building corresponding to that number. These numbers also dictate where in your city you can place a building, so a tile taken with architect number two must be placed in either row two or column two of your city.

For the early rounds we were all staring at our 'helpers' (sheets that let you know the purpose and effect of each building) religiously, and placing our architects almost at random. Based on the artwork, architects are all either abnormally unhappy looking men with big arms or smug 12-year-old girls in headsets. Probably true. I've no idea. Either way, we didn't exactly imbue ours with purpose early on.

In the beginning it seems as though there's just too much to keep in mind. Making sure that you take a building with an architect number that will let you place it usefully in your city; keeping track of 'The Urbanist', named for an expert in city planning but ironically a short, chubby obstacle to you actually doing any. He occupies whichever tile was last taken, preventing players from taking anything in the same row and column.

Then there are resources. Each building gives you either 'inhabitants' or 'barrels', and requires a separate number of either to run. Players need to make sure that the resources required to run their city stay relatively equal to the resources they have. Too few, and they can't run every building. Too many, and they lose points at the end of the game.

We fell afoul of that one early. As designated 'rule person' I failed to explain the resource system properly, leading K to grab as many inhabitants as he could and leaving him with a city with the population density of Mumbai. He wasn't happy and neither, presumably, were his inhabitants.

Then came the 'lightbulb moment'. There was a sudden shift in speed. All those game mechanics that had seemed opaque became manageable, and, more importantly, fun. Now we were planning moves carefully, keeping track of one another and engaging in the game's most important mechanic: gaining bonuses by placing buildings in specific ways, or adjacent to certain others.

This opens up a wealth of simple but diverse strategies. Do you try and hit those high-scoring achievements by stacking a tower block or surrounding a factory with shops and harbours? Or do you aim for spreading more modest, attainable bonuses across whatever tiles you can? And, for the competitive-minded, do you try and take tiles that you know will mess up the plans of your opponents?

K's city almost entirely comprised of residential buildings and parks, which in the real world would result initially in a kind of lazy utopia swiftly followed by starvation and then death, but proved pretty effective on the board. E opted for a long harbour dotted with shops. Good for a day shopping but nothing residential so once you drop, you drop into the sea. I aimed for the thing that came with the highest single bonus: getting a public service building in each quadrant, leaving me with the city that would objectively rank highest on TripAdvisor.

By this point K's desire to win had exceeded his survival instinct: he didn't seem to be breathing, staring ahead at the construction site like a man desperately trying to prove he's a telepath. So E and I decided to try and stop him getting any shops, which he desperately needed to counteract his overpopulation problem. Using the Urbanist in this way is a strategic minefield. You're forced to think turns ahead: 'If I block them from taking that shop, they'll go for that park, which will block me from getting that factory I need but leaves me open to block the shop again...' and so on.

Scoring highlights another nice thing about the game: it's deceptive. A quick look at each city and we predicted E in first, myself second and K last. We were pretty off. Scores placed me and K, even with his seemingly less ordered city, tied in first, with E's picturesque harbour in last. No matter how well it's going, it's difficult to tell just how good your opponent's odd tactics might be, even with full view of their city. It forces you to stay on your guard.

There are flaws with Quadropolis, obviously. Although the artwork does a decent job of distinguishing between building types, it's relatively small size leaves colour as the defining differentiator. As a tragically colourblind man, K accidentally built a park instead of a supermarket, losing him a bonus and presumably forcing his inhabitants to forage for acorns.

Equally, the 'helpers', which aim to remind you of the various bonuses, are purely visual. The simplicity is nice, but again, the images are small and in some cases slightly unclear, meaning that for the first game or so you'll still find yourself consulting the instruction book for the very same info they're supposed to give you. It slightly defeats the point.

But this is the importance of that moment. In the knowledge that we were playing to review, we started out overly critical, airing any and all complaints we could think of ('Why are parks the same colour as services?' 'Why does the guy on the box look so pleased with himself?' 'I don't get it.' 'Is there more wine?' 'Stop writing down everything we say.')

Within a couple of rounds, we'd shut up. That's testament to the Quadropolis board game's deceptive simplicity. Once each mechanic slots into place in your mind, its apparent complexity vanishes and it becomes a quick-moving, fun, and strategic experience.