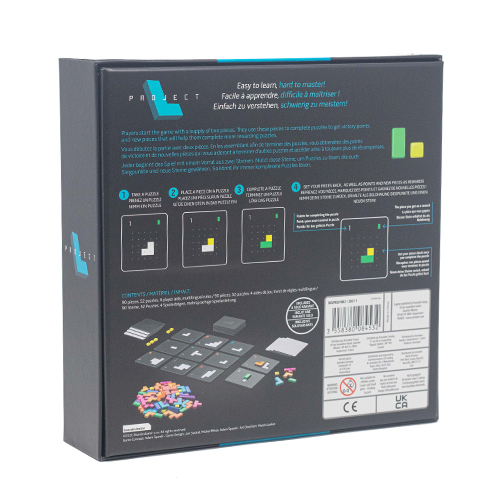 you could earn 2237 victory points

you could earn 2237 victory points

“Project L Sometimes the big grand euro style games miss the point of games being quick and fun. There isn’t always time to sink your teeth into an in depth simulation of trade economies. But we can usually find time for a quick but satisfying game, especially when it looks this good. Project L is a simple game done well. In the game you start with a limited number of tetris…
Read More
Category Board Games Tags Abstract, Boardcubator, Party, Strategy, Value For Money SKU ZBG-BCUPRL01ML1 Availability Restock Expected
Share
Share this
87%

"Project L Sometimes the big grand euro style games miss the point of games being quick and fun. There isn’t always time to sink your teeth into an in depth simulation of trade economies. But we can usually find time for a quick but satisfying game, especially when it looks this good. Project L is a simple game done well. In the game you start with a limited number of tetris like pieces and on your turn you must take three actions from a possible 5. Four of these you can take multiple times, but the master action can only be taken once a turn. Your pieces are used to fulfil puzzle cards. There are 8 of these on the table and the first action you will probably do it take, which is to take a puzzle from the display or one of the decks. You can work on up to four puzzles at a time. The recycle action lets you refill one of the rows of puzzle cards, upgrade lets you upgrade one of your tetris pieces one level, or grab a new one square piece from the supply. Then you can place a piece into a puzzle card. If it fills the last bit of the puzzle you take the new piece show on the puzzle card and place the card in your scoring pile. Lastly the mast action lets you place one piece into each of the puzzles you are working on. It’s simplicity creates an immediate game that is quick to play and super quick to explain. The components are tactile and well made and the table presence will be a draw to others. If you are looking for more depth and bite then keep an eye out on Zatu for coming expansions. Player count: 1-4 Time: 20-40 minutes Age rating: 8+"

Project L is an abstract puzzle game for 1-4 players from designers Michal Mikes, Jan Soukal, Adam Spane and published by Boardcubator. Anyone that has played or seen Tetris should feel right at home with Project L, as it has that retro video game feel, in visuals and in gameplay. It is very accessible and can be picked up and played within a matter of minutes.

The core concept of the game is that players will use colourful plastic shaped pieces to complete puzzle cards. Puzzle cards come in two types: white or black. The white ones are easier to complete, with the black ones being harder. Upon completing a puzzle, you not only get points for end game scoring, but also get another bonus piece (in most cases). Any pieces that you have used to complete a puzzle or returned to your supply (along with bonus piece) to be used in a future puzzle. As part of set-up, four puzzle tiles are drawn from the white puzzle stack and the black puzzle stack and laid in a row, effectively forming a market. On a player's turn they can perform three actions:

-Take a puzzle tile from one of the face-up pieces displayed and replace it with a new one.

-Take a level one puzzle piece from the supply.

-Place a puzzle piece on a puzzle tile you have previously collected.

-Perform a "master action" which allows you to place one piece into each of your puzzles.

Project L is a wonderfully simple, yet compelling and addictive game. There is something about the simplicity about that makes you say, "One more game?" It plays quickly, with minimal setup, it is very accessible and looks bright and colourful.

It is a game that you can teach to just about anyone and they will be up and running with it in a matter of minutes. There is an underlying "light" engine building feel to it as well. Completing one puzzle will give you another piece that you can use to complete another puzzle and so on. The pieces are bright and chunky and the game has a very satisfying tactile feel to it. Seeing a completed puzzle tile, especially one of the big four or five pointers is great. There is minimal interaction between the players, but that is not what this game is about. It is about running your own puzzle in the most efficient way to gain the most points.

Despite its simplicity, there is still some thought behind your actions. Do you spend time upgrading your pieces to make completing the more complex puzzles easier. Or do you try and go for many smaller point puzzles whilst your opponent is spending two or three turns building up to a big five point puzzle tile. End game scoring has always been close in the games I have played, which have mostly been against one other player.

It plays very well solo too. The core game is practically the same with some additional rules to learn. The game flows very well and the additional rules do not get in the way of the core gameplay, yet they offer an additional challenge to overcome. The cards are laid out in a three by three grid and a number of cubes placed above each column. Each time a piece is taken from the grid, a cube is moved from the corresponding column in to the AI's supply. Cubes are then distributed from the opponent's supply and any available pieces above the columns. The AI opponent always takes a piece with the most points on their go and stores in their victory pile. The AI offers a decent challenge and simulates having other players around the table very well.

Overall, Project L is a very lightweight, family-friendly game. It looks colourful, the rules are simple, it is super accessible and can be taught to non-gamers with ease. It is brilliant for a breezy end of night filler or to kick off a gaming night with. There are also several variants and, if you have the deluxe version, additional "modules" that you can add in to the game to keep it fresh.