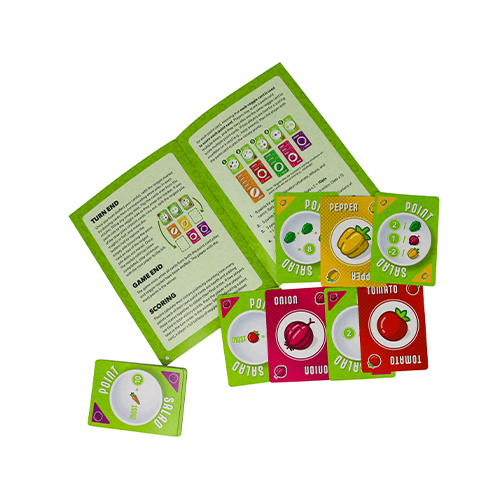 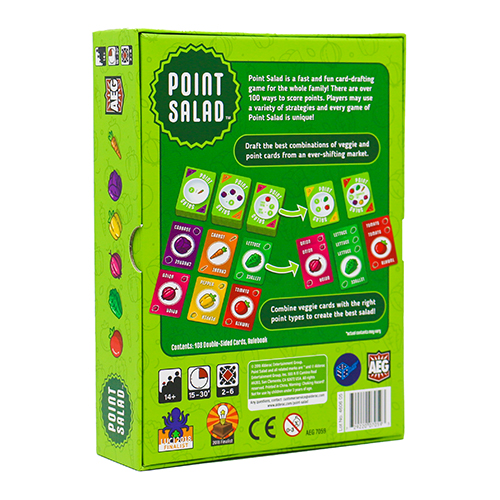 Point SaladOne of the ‘holy grails’ of board games is games with easy and quick to learn rules with a surprising depth of gameplay. If the game can play in less than an hour that’s a bonus too. Point Salad is a game that scores big on all these fronts. Point Salad comes with a single deck of cards. On the ‘front’ of the cards is a vegetable and on the ‘back’ is a uniqu…
Read More
Category Board Games Tags Alderac Entertainment Group, Best Sellers, Fun For All the Family, Podcast Approved, Travel, Value For Money SKU ZBG-AEG7059 Availability 3+ in stock
Share
Share this

Point Salad One of the ‘holy grails’ of board games is games with easy and quick to learn rules with a surprising depth of gameplay. If the game can play in less than an hour that’s a bonus too. Point Salad is a game that scores big on all these fronts. Point Salad comes with a single deck of cards. On the ‘front’ of the cards is a vegetable and on the ‘back’ is a unique scoring condition. Cards are shuffled and dealt into three draw piles. Two cards are then place face up under each of these draw piles. On your turn you will pick two face up vegetable cards or one of the scoring cards on the top of the decks. This is a fine balancing act because often point cards will give positive points for some veg and negative for other. Once a turn you may also flip over an acquired point card to it’s veggie side, but not the other way around. There is a graphic indication that tells you what veggie is on the other side of the card. When all the cards are gone you score. The game is incredibly fun to play and what you think will be a case of selecting the most obvious cards becomes a battle of tactics and meanness. Do you take cards that will benefit others, hoping they will help you later. Do you broadcast your plans with a big scoring card and try to fulfil it? Point Salad is a genius design at home on the tables of families and gamers. It’s simple rule set, good looks and engaging gameplay make it a winner every time. Look out for Calico and Dollars for Donuts from the same designers soon! Player count: 2-6 Time: 15-30 minutes Age rating: 8+

Point Salad is a fast and fun card drafting game for the whole family. There are over 100 ways to score points. Players may use a variety of strategies and every game of Point Salad is unique!

Cards come in six different types of veggies, and the back of each card has a different scoring method. So for instance, one scoring method may award 2 points for every carrot you have, but deduct a point for every onion. By drafting combinations of veggies and point cards that work for your strategy, you can amass the most points and win.

Point Salad, designed by Molly Johnson, Robert Melvin and Shawn Stankewich and published by AEG, is a two to six player, quick playing, card drafting game. In Point Salad there are six different vegetables (Lettuce, tomatoes, peppers, carrots, onion and cabbage). The cards are double sided with the vegetables on one side and a point scoring opportunity on the other. Taking it in turns players will draft vegetables or point scoring cards to score the most points.

Play continues this way until all the cards have been drafted. Players count up their points they have gained from their point scoring cards and the player with the most points is the winner.

Point Salad is a light, fun drafting game. It is a great game to introduce the drafting mechanism to new players, or players who have not played a drafting game before. The rules are straightforward and easy to understand and you can get the game set up and taught in minutes.

Certain point cards will require players to set collect a combination of vegetables. They are all pretty varied and players are going to see a different combination each game. This game has been an instant hit with my work colleagues and gaming group. The artwork is vibrant and colourful and draws people in. It is the perfect game length for this level of game and sits well as a lunch time game. Or filler game for a games night. There is enough to it to keep experienced gamers entertained. Yet accessible enough that non gamers can get in to it easily.

I have had a lot of fun with Point Salad and I can see this sticking around on my shelf and hitting my gaming tables often. A great addition to the card drafting genre.