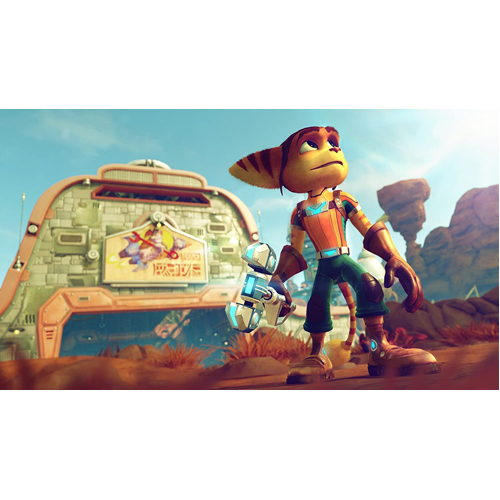 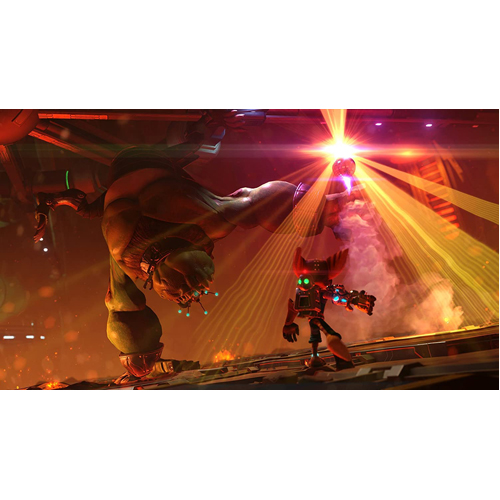 Pay in 3 interest-free payments on eligible purchases. Learn more
Success! We will let you know when this product is available again.
Your email address has been unsubscribed!
Your email address has been unsubscribed!
Notify me when this product is available to purchase!
This email address is already subscribed to this product!
Play the game, based on the movie, based on the game! Ratchet & Clank (PS4) is a new game based on elements from the original Ratchet & Clank (PS2). Developed alongside the major motion CG-animated picture coming to theatres in 2016, Ratchet & Clank (PS4) marks the PlayStation 4 debut of PlayStation’s greatest heroes. Join Ratchet, Clank, Captain Qwark and new friends …
Read More
Category Video Games Tags Action/Adventure Video Games, Best Sellers, PS4, Software, Sony, Value For Money SKU VCS-P4REPLSNY41467 Availability Out of stock
Share
Share this
85%

With an hour of new cinematics (including footage from the film), Ratchet & Clank (PS4) takes a deeper look at the characters’ origin stories and modernizes the original gameplay. Explore the galaxy in a game that features new planets, new and updated gameplay segments, all-new bosses, all-new Clank gameplay, all-new flight sequences, and much more --- with completely new visuals built to demonstrate the power of the PS4!

Battle your enemies with an out-of-this-world arsenal, including new weapons and fan-favorite tools of destruction from the Ratchet & Clank Future series. From the brand new Pixelizer (which transforms enemies into explosive 8-bit pixels) to franchise favorites like the dance-party-inducing Groovitron and wise-cracking robotic bodyguard Mr. Zurkon, Ratchet & Clank’s arsenal has never been better.

Help Ratchet and Clank save the galaxy for the first time, again, exclusively on PlayStation 4!

Key Features:
A new Ratchet & Clank adventure based on the movie (based on the 2002 PS2 game).
A deeper version of the origin story, with over an hour of cinematics, including footage from the feature film
All-new visuals showcase the power of the PlayStation 4
Collect a massive arsenal including new weapons and fan-favorites from across the entire series.
Several new planets, new and updated gameplay segments, all-new flight sequences, all-new Clank gameplay, and all-new boss battles.

Ratchet & Clank are two of the most iconic Sony mascots of the PlayStation 2 era. The duo has formed a mighty partnership throughout their intergalactic tech-infused adventures. They are jumping and blasting their way through many a dangerous mission. So when the galaxy is in danger, who better to call on to save the day?

Ratchet & Clank is the game based on the movie, based on the game (and there are not many titles that allow you to say that!) The original 2002 platformer was a classic adventure-action game that spawned many sequels as well as a full CGI theatrical film in 2016. Along with the animated blockbuster, Ratchet & Clank (PS4) succeeds in introducing these loveable adventurers to a whole new generation while reminding older gamers of their previous escapades. Though a remake of the first game, this new entry retains some of the old while mixing in a fresh batch of new ideas. The question is, have Insomniac Games engineered an extraordinary escapade or just a hunk of junk?

Young Lomax Ratchet is a spaceship mechanic with aspirations of becoming a Ranger, heroes of the galaxy. One day he gets an opportunity to try out for the intergalactic squadron however despite passing all of the training with flying colours, the Rangers are unable to accept him.

Meanwhile on the planet, Quartu, Chairman Alonzo Drek and Dr Nefarious are hatching up an evil plan to destroy the Rangers once and for all. As they manufacture a powerful war bot army, one little defective robot manages to escape. He nabs an escape ship and crash lands on Ratchet's home planet. The pair bump into each other and Ratchet names his new buddy "Clank". With an army of destructive war bots threatening peace in the system, Ratchet & Clank decided to journey to the home planet of the Rangers to warn them of the impending danger.

Straight off the bat, Insomniac should be praised for just how much love and effort has gone into this charming game. The vistas are vast, the writing is witty, and the action is exhilarating! Every world is absolutely brimming with colour and energy which makes you feel like you are part of a much bigger ecosystem.

Ratchet & Clank does well to show off the power of the PS4 with some of the most impressive visuals seen on a console game of this generation. There are so many small details all being processed at the same time. The graphics truly are stunning. The writing is heartwarming, funny, and the characters are full of personality. The animation and cinematography really bring the script to life. It is a great example of just how much video game cut scenes have developed over the years.

To add on top of that Michael Bross' soundtrack is well composed and effortlessly compliments the on-screen action. If you enjoy film and game scores, it is well worth giving the official soundtrack a listen.

Mixing up the Gameplay

Ratchet & Clank works hard to keep you entertained and regularly challenged. From running and gunning platforming to epic spaceship battles, there is always something new just around the corner. Upon breaking crates and defeating enemies, you collect tiny parts of scrap which can be used to purchase additional weapons. They can also be upgraded at regular intervals which are particularly handy against stronger enemies. It's fun trying out new additions to your armoury and soon you'll discover which ones you prefer for different situations. There are 3 difficulty options so you can tailor the challenge to your own skill level. As a seasoned gamer, I found the normal difficulty to be nicely balanced. The game remained challenging but not frustrating.

Unlocking new abilities provides you with the opportunity to revisit earlier worlds and access previously unreachable areas. Sometimes these levels can feel a bit barren without the epic battles demanding your full attention. Still, it's a small gripe! It is only noticeable because Insomniac did such a great job filling the levels with action in the first place!

There is no multiplayer option in this game and for some readers that may be a drawback but it largely depends on how important a multiplayer feature is for you. All of the attention has been poured into providing a rich and lavish single-player experience, and in that respect, its mission accomplished.

Back to their Best

Ratchet & Clank is a solid and inventive return for the iconic PlayStation duo. The gameplay is varied, and the presentation is fantastic. The writing caters for a family-friendly audience and there is a range of difficulties to select from. What you get here is a really well-done solo platforming game with a lot to offer. A fitting addition to the Ratchet & Clank collection.