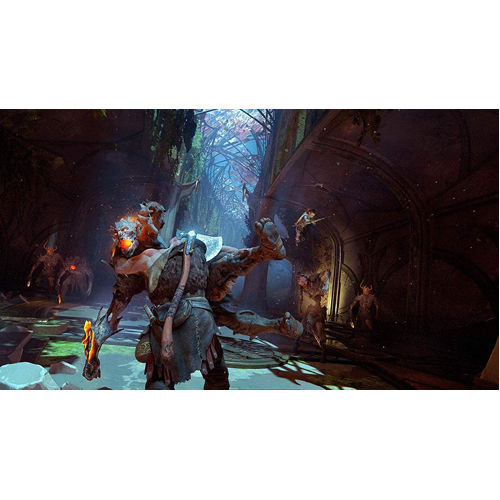 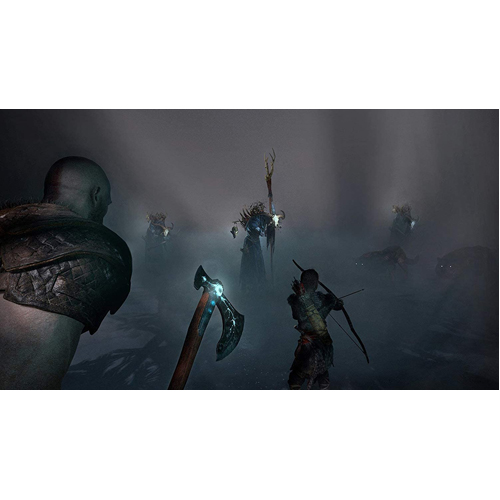 Pay in 3 interest-free payments on eligible purchases. Learn more
Success! We will let you know when this product is available again.
Your email address has been unsubscribed!
Your email address has been unsubscribed!
Notify me when this product is available to purchase!
This email address is already subscribed to this product!
Kratos; a son of a god living as a man, outside the shadow of the gods, he seeks solitude in the unfamiliar lands of Norse mythology. With new purpose and his son at his side, Kratos must fight for survival as powerful forces threaten to disrupt the new life he has created. Hope Is What Makes Us Strong Kratos returns. This latest iteration of God of War delves deeper into the emotio…
Read More
Category Video Games Tags Action/Adventure Video Games, God of War Video Games, PS4, Software, Sony SKU VCS-P4READSNY96440 Availability Out of stock
Share
Share this
95%

Kratos; a son of a god living as a man, outside the shadow of the gods, he seeks solitude in the unfamiliar lands of Norse mythology. With new purpose and his son at his side, Kratos must fight for survival as powerful forces threaten to disrupt the new life he has created.

Hope Is What Makes Us Strong

Kratos returns. This latest iteration of God of War delves deeper into the emotional journey of the immortal demigod as he makes a decision to change.

For more than a decade Kratos has hacked and slashed his way through the roster of Greek gods in over-the-top and gloriously gory combat. But this new God of War reinvents itself and throws players into a beautiful semi open-world drenched in Norse mythology.

Out With The Old

Don’t mistake these major shifts as the end of God of War, this is a much needed maturation for the series. Protagonist Kratos is no longer an angst-ridden, rage-fuelled heavy metal album cover. The years have transformed him into a more reserved and thoughtful character as well as a sensitive father figure. His violent tendencies and aggression still remain, but they are a last resort rather than his default setting. This is in no small part down to his son Atreus, who Kratos protects and guides and desperately tries to remain a positive influence for.

For long-time fans of the God of War series it may feel strange watching Kratos, a once bloodthirsty icon for PlayStation, nurturing his son. But thanks to excellent writing, voice acting and character animation it comes across entirely natural. And you’ll quickly be drawn into their emotional journey.

Atreus is naive, having spent his entire life protected from the dangers of the world and raised in isolation. He has little to no understanding of the machinations at play. Only with the death of his mother prior to the beginning of the game are Atreus and Kratos forced out from a life of solitude. With her dying wish to have her ashes spread from the highest peak in the land. Kratos and his son set out into a world of ferocious beasts, fiends, hulking cave trolls, and gods, all taken from Norse mythology.

God of War is beautiful, it is an absolute artistic and technical tour de force. Every inch of Midgard and the other realms are meticulously detailed. The love and passion the creators have for their game is evident in every aspect of design and structure. Kratos’ grizzled & chiselled physique as well as his aging weapons show signs of the epic battles previously fought. And, as a stroke of technical genius, the camera never cuts away - the entire game plays out as if one continuous camera shot. Transitions from gameplay to cutscene and back are seamless and the loading of new areas are hidden in a multitude of clever tricks.

The majority of the duo’s adventure is set in Midgard. At the centre is The Lake of Nine, that you can explore by boat. Optional puzzles, hidden collectibles, and imposing (and thankfully optional) bosses are dotted around the map. Your adventure will navigate through most of these areas allowing you to mark down treasures and paths you cannot yet access for later exploration.

Atreus, who Kratos refers to constantly as ‘boy’, will fight by your side throughout the campaign. Firing arrows from range either autonomously or at your request. He is the perfect companion for lining up a killer combo. And the boy is no standard AI partner - he is smart, intuitive and only requires aid when the storyline calls for it. Kratos’ weapon of choice is an axe rather than his iconic Blades of Chaos.

Combat is superb and much more methodical than God of War’s previous hack-and-slash adventures. The new third person, over-the-shoulder camera places you directly into the action. And you’ll feel every swing of Kratos’ axe and react to every hit he takes. Towering enemies are even more intimidating with this new view and the first time you take on a cave troll is unforgettable. God of War’s combat is fantastic from the get-go and only gets better as it gradually introduces new systems and combination attacks.

Kratos also dips his bloodied toe into the realm of RPGs with the introduction of different armour to wear. These influence a range of character stats, elemental affinities, with some of the rarer sets also containing enchantments for further benefits. Armour is either purchased or crafted by two argumentative dwarven brothers. Brok is foul-mouthed and dirty, while Sindri is a germophobe who will rigorously clean anything you hand him.

While conversations with the brothers are enjoyable it is Mimir who is truly the star of the show. A horned, one-eyed sage accompanies the duo for the majority of the game, serving as a guide and providing much of the exposition. He is a veritable fountain of knowledge and is more than willing to share. Brok, Sindri and Mimir are fantastic but so is the entirety of God of War’s cast, each one is wonderfully realised, they feel tangible and relatable. There are just a handful of characters to interact with, but their huge personalities imbue the world with a very real sense of history.

We’re in the Endgame Now

God of War isn’t set in a huge and empty open world, it is a well planned landscape stuffed with secrets and quests. For instance, as mentioned previously, there are different realms to visit throughout your adventure but there are two areas designed to be visited once the credits roll. There’s Muspelheim, which tasks you with climbing a volcano, each ‘floor’ offers an arena battle surrounded by lava. Some fights are against strong enemies, others require you to defeat waves of cannon-fodder. The other realm, Niflheim, is a randomly generated, poisonous gas-filled nightmare. The goal is to survive for as long as possible while killing enemies, collecting treasure, and escaping before the poison claims you. Both locations offer tense and rewarding pursuits that are only accessible if you play at your best, especially if you plan on defeating the Valkyrie bosses and bagging yourself a trophy. Speaking of which...

Down But Not Out

I completed God of War with a respectable 48% of the trophies. There are only 11 trophies linked to story progression, the rest revolve around side quests, boss fights, collectables, upgrades and kill counts. Luckily most of these are linked together - to earn materials to upgrade weapons you’ll need to do side quests, and while completing side quests you’ll be doing plenty of fighting.

The most difficult trophies are for challenges in the optional realms and fighting the most fearsome opponents in the game - the Valkyries. There are nine of these and each one requires intimate knowledge of Kratos’ combos and defences to defeat. All in all, this trophy list is healthy mix of exploration and skill. It’s not impossible but it isn’t simple either and is certainly a platinum trophy to be proud of achieving.

God of War is, and always has been, a spectacular action game filled with grand set pieces and bone crunching combat. But it’s the level of maturity this entry introduces that will sweep you off of your feet. God of War, just like Kratos, acknowledges the past while accepting the need to improve. Everything new it brings to the table is a much need improvement, and everything it carries over from previous entries are perfectly balanced. This is no longer a simple hack and slash action series, using brutality for the sake of shock value. Now it strides forward with expert storytelling that will hopefully lead to many more enthralling adventures.