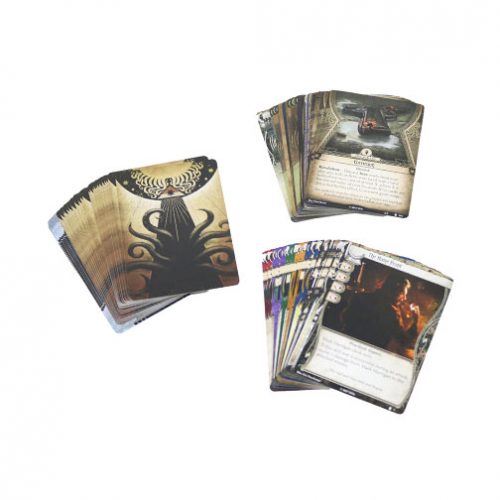 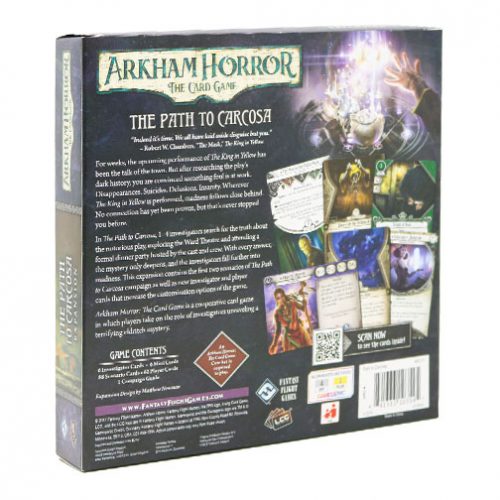 Arkham Horror: The Card Game is a cooperative game for up to two players (or four, with two core sets). Set within the fictional world of H P Lovecraft’s Cthulhu Mythos, players will each take on the role of an investigator. Each investigator is unique, with their own set of skills, strengths and weaknesses, represented a deck of cards. The game is played by completing a numbe…
Read More
Category Board Games Tags Arkham Horror, Arkham Horror LCG, Best Sellers, Fantasy Flight Games, Living Card Game SKU ZBG-FFGAHC11 Availability 3+ in stock
Share
Share this

The game is played by completing a number of adventures; individual scenarios that combine to form a campaign. As players progress through a campaign, and purchase new expansions, they will have the opportunity to customise their investigator decks. This will enable them to tweak the gameplay to their personal preferences, and better equip themselves against challenges thrown up by the game.

Path to Carcosa is the second deluxe expansion for Arkham Horror the Card Game. It contains all the content you will need to undertake a new campaign. This expansion contains two scenarios, and five new investigators. In addition you will find new cards to improve and update a variety of investigator decks. This expansion introduces new game mechanics, including a new exploration deck, which presents new challenges to overcome.

The campaign can be concluded by purchasing the six scenario packs that complete the Path to Carcosa: Echoes of thr Past, The Unspeakable Oath, A Phantom of Truth, The Pallid Mask, Balck Stars, Rise, and Dim Carcosa. The scenario packs are not required in order to play The Forgotten Age, but you will not be able to complete the campaign story without them.

This is an expansion. To play Path of Carcosa, you will require a copy of Arkham Horror the Card Game.

A mysterious play has come to Arkham, Massachusetts, ‘The King in Yellow’. Attending the play with your cohorts you have trouble keeping your eyes open. When you awake all is not as it was, the theater lies ruined. You set about investigating only to find….well that would be spoilers.

Path to Carcosa is the latest big box expansion to hit the world of the Arkham Horror LCG and boy does it pack a wallop. Not only is it the beginning of a new campaign featuring two excellent scenarios, ‘Curtain Call’ and the ‘The Last King’, but it also comes packed with six new investigators and an eerie library’s worth of investigator cards for you to play with. Let’s dive in and try and noodle out the mysteries that lie within before reality drives us mad!

Who you gonna call?

The six new investigators that Path to Carcosa introduces have me wondering which way to turn, they are all fantastic! So far, the investigators we’ve had have not played with the mechanics of the game in a really strong way, but here it feels like the designers have let the sails unfurl and set off into uncharted waters. Let’s look at my personal favorites:

Alas, poor Yorrick. Actually don’t feel sorry for him, he’s great. With a massive four fight from the off and two amazing abilities to get cards from the discard pile, which you will hear a lot of players refer to as recursion, Yorrick is amazingly strong. Tricks, like sacrificing a Beat Cop and then recurring him later, or letting your precious Leather Coat take a hit only to get it back when you clonk the beast over the head with a Gravedigger's Shovel, are fantastic.

Another card from the set I’ve been using a lot with Yorrick is the .32 Colt, a versatile weapon with a lot of bang for your buck making it great for recursion. You can see the current build I’m playing here, though I have some changes planned.

Digging up the Truth

I’m itching to try the new Guardian Mark Harrigan. The first proper tank-style character in the game, Mark cannot only take a beating utilising new cards like True Grit but actually gets better because of it. His weakness is a brilliant piece of design and shows the designer’s continuing desire to experiment in the design space they have created. I should be taking him through Dunwich soon!

Sefina is the third one I am really keen to try. A fascinating ability pushing you to build a deck around events and allowing you to play some events more than twice as you use The Painted World to copy the ability. I think my build will look something like this, but I haven’t quite settled on it yet.

The other three investigators are both interesting in of themselves but haven’t caught my eye as much as the others. Our first neutral investigator, Lola, can change class to use different cards, very interesting, and Akachi gains more charges on spells which have proven super powerful in a friend’s build. Minh has an interesting ability which staples on a wild skill icon to a card committed to skill tests at her location, note she can do it once per investigator per round!

There are a host of new cards for all classes and I won’t go through everything, let’s just look at some personal favourites so far, one from each class. We have covered the .32 colt above and Yorrick’s shovel so let’s go deeper.

Despite the strange solution from Dunwich not turning out to be as interesting as I had hoped, I love that the designers are including investigator cards that affect the campaign log. Is it important that we decode the Glyphs? Who knows

What a card, allowing high Agility people to investigate, possibly indefinitely if they do good enough. Of course this combos perfectly with another new card Daring Manuever. Great card with simple, strong flavour.

Wow, just wow. Spells are expensive, you know, you’ve seen. This card allows you to play them so much cheaper and if you choose Achai as your mystic you are getting even more bang for your buck. I can’t see this not being in every mystic deck from now on.

As if Yorrick wasn’t badass enough at recursion, you have this new card to help you out. I admit that calculating when to use this can be troublesome, but having the ability to get Lucky, Look what I found etc. back is just great, not to mention it’s loaded with symbols to help out in almost any situation.

Carcosa comes with two new basic weaknesses and this is probably one of my favourite ones so far. They have really outdone themselves with not only the flavour text of the cards in this set but also the mechanics supporting the theme of the cards. Love it.

This is your spoiler warning! Awooga, Awooga, abandon article if you do not want to know what happens at all in the scenarios in Path to Carcosa. I’m not going to delve into mechanics of the scenarios, I’ll be looking at those in a future Beyond the Veil articles, but I will be touching on the basic story.

The play’s the thing

Ok so you get a whole bunch of new toys, but what of the story, that’s what you are really here for after all? Unlike in Dunwich where you could play the two scenarios in any order, you play the Path to Carcosa starting with a trip to the theatre in Curtain Call and then moving onto a lovely dinner in The Last King. What could possibly go wrong?

The King in Yellow has come to town and being the sophisticated Painter, Actress, Soldier, Shaman or Gravedigger that you are you’ve decided to go and get some culture. Falling asleep during the play you find the theater abandoned and destroyed. What the hell happened?

As you wander around the theatre it becomes increasingly apparent that something horrible has occurred. As you search, eventually you will become aware of a mysterious stranger wandering the rooms of the theatre and that he is not the only thing going bump in the night. On his appearance, you also realise that the theatre has been set ablaze, a fire that will quickly spread throughout the location and engulf our investigators as they try to take down the Man in the Pallid Mask.

As with all Arkham scenarios, lose or win you will go onto the next chapter of the story, but not before noting that there is a new mechanic. Some of the outcomes in Path to Carcosa will involve you adding Doubt or Conviction to the campaign log. I am sure nothing bad will happen because of that!

After the events of the Theatre, you have clues pointing you towards a party being held at a nearby mansion. Making your way through the front door of the mansion to the palatial lobby you immediately feel that something is amiss. Putting aside your feeling of dread you decide to interview the various cast members circulating around the party, obtaining snippets of details about the play as your investigations come to fruition. Each one successfully emptied of clues will be ‘interviewed’ in your campaign log, something that is bound to be reflected in the scenarios to come.

Your job is to get as many clues as you can and then leave, but when the hostess of the party eventually turns up she is going to put a stop to your efforts until you deal with her. It is likely that you won’t resign before the first of the ‘Sickening Reality’ events occur and you will stare in horror as the guests around you start to morph and change into the monsters they really are.

Or is it just an illusion? The flavour text here is superb, invoking a real sense of the world warping around you and driving home the horror your characters are being exposed to.

Know the path, walk the path

Path to Carcosa is a brilliant addition to the Arkham Horror LCG and I thoroughly recommend picking it up. Even if you don’t get to the scenarios straight away, the sheer innovation in the investigator design will breath new life into the previous scenarios you have played through and inspire a ton of new deck ideas.