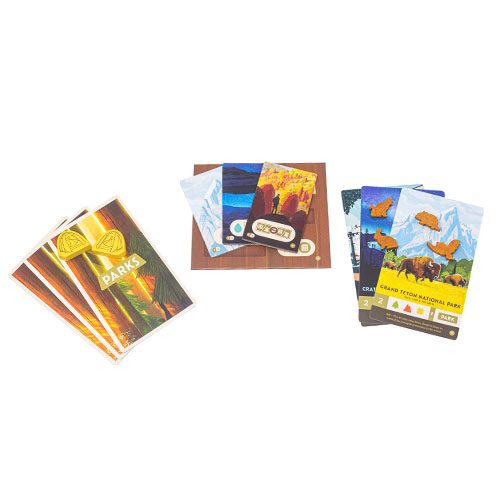 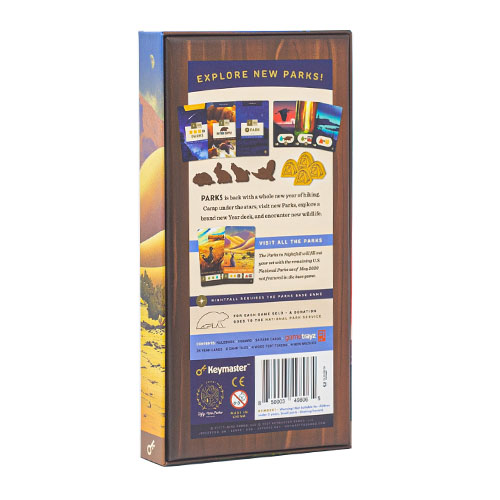 you could earn 1769 victory points

you could earn 1769 victory points

Welcome to PARKS Expansion: Nightfall. In Nightfall, you’ll find new Park Cards featuring new rewards and all new artwork from the Fifty-Nine Parks Print Series, including the 17 parks not represented in the base game. This expansion also includes new Year Cards and Bonus Scoring opportunities, and you’ll get to experience the trail in a brand new way with the new Campin…
Read More
Category Board Games Tags Best Sellers, Keymaster Games, Worker Placement SKU ZBG-KYM05X01 Availability 3+ in stock
Share
Share this
73%

Welcome to PARKS Expansion: Nightfall. In Nightfall, you'll find new Park Cards featuring new rewards and all new artwork from the Fifty-Nine Parks Print Series, including the 17 parks not represented in the base game. This expansion also includes new Year Cards and Bonus Scoring opportunities, and you'll get to experience the trail in a brand new way with the new Camping mechanic.

Parks took the gaming world by storm last year when it was released. Largely because of the gorgeous card art. With contributions from 38 artists, the American National Parks have never looked so good. The game is fun, but quite light and not all the parks were represented for some strange reason. An expansion was always on the cards.

Parks Nightfall brings the 17 missing parks into the game, alongside a few additional components and slight rule tweaks. The art again is amazing, but does it bring enough to warrant you adding to your collection?

In truth, rules and components wise, this expansion doesn’t offer loads to the overall gameplay. Anyone who didn’t enjoy the first game due to the simplicity of the rules won't have their opinion changed drastically by trying Parks Nightfall. The main two additions brought by this expansion are the campsites and new cards. Let’s look at them both in detail.

First up, the campsites. These are nice wooden components you add to the trail starting from the trail end, leaving a space between each one. If you land on a space with a campsite on it, you can either take this space’s usual action or decide to make use of the facilities and stay the night. You then move the tent down to the new campsite tiles you have laid beside the board. These offer you some interesting and powerful choices.

For example, you could exchange one mountain resource for five Sunshine on one campsite or get a new canteen and water on another. Both are pretty useful.  Others, however, are less valuable but the tiles change each round and there is always at least one or two useful options. But they are first come first served s it does add a bit of a race element to get the good ones.

As the campsites are at the later end of the trail, it adds a nice dynamic where players will be motivated to reach the end tiles more quickly now. The first few times we played with this expansion we did score lower than we usually would. We were racing forward too much trying to use these new powers too quickly. But once we settled down, we found they added a nice balance and additional options you didn’t need to rush towards.

This was needed for me, to make this game a little more strategic. This game isn’t about heavy decisions, this is not a crunchy euro game. But a few more interesting choices were needed in my opinion, and this brings that for sure. But some have said the campsites don’t necessarily help with this as you may not always want or need to use the options they offer. This is true. But essentially this is a worker placement game. Just with a linear path. And in worker placement games you don’t always want all the options. But more options are better to have!

The other main addition is the 17 missing parks in the shape of 24 new Park cards. For the completist, this is essential. Anyone who has visited a park not previously represented, then I can see why this would be very tempting. Also, any fans of the original game’s art, and let’s face it, how could you not be, would be keen just to see the new cards for this reason. And they do not disappoint. There are some stunning paintings on these new cards. Voyageurs and Katmai National Parks are my two early favourites.

But there is one disappointment here. Three parks are almost identical to the cards used in the original base game. Rocky Mountain and Arches National Park have just had the tone and colour changed to represent night-time and Redwood is almost identical to Sequoia from the base game. This is a minor quibble, but for a game that sells itself so much on the art, this does seem cheap to me.

With that said, they have at least done something different with the new cards where they all now offer an instant bonus when you get them. After you have paid the resources needed to visit the park and claim the card, you then gain an instant bonus such as extra resources, gear or chance to take photos; and even the ability to buy a second card. This is big considering chances to do this in the game are limited, and the way to win for me is by maximising the chances you have to do this.

Which in the base game were often too few and far between. The power to buy a new card is on four of the 24 new cards, so I think the designers of the game agree with me. In the rules, they also suggest manipulating the deck at the start to have just 48 cards in the Parks deck, with 24 of them being the new Nightfall ones. They say for a more action-packed game. I think more to correct from the issues of the original game around acquiring new park cards. This certainly helps

Beauty is in the eye of the beholder

Overall, the card art is amazing and I think this is the main draw of this game. Despite some being very similar to the base game as I mentioned, it is still an expansion I would buy simply just to get these cards. I love going through them, just gazing at the beautiful images, imagining what it would be like to be there.

In the game, I am like this too. I am quite a quick gamer, very anti analysis paralysis, and more in favour of keeping a game moving. But here, In Parks, I certainly do slow down. Take in the view. Relax a while and enjoy the quiet zen-like state I go into when playing this game.

If this sounds appealing then I would recommend this highly. If you enjoyed the base game for this same reason, then add this expansion immediately. But if you are looking for the game to completely change, then think again. There will still be moments in the game where you cannot do much, especially near the end of the rounds when there are no scoring options left by either visiting a park or taking a picture. This expansion won't necessarily fix that.

All of this comes in another stunning production. The art, components, card and box itself are all top-notch, as you would expect from Keymaster games, with another beautiful and snuggly fitted insert from Game Trayz. It’s a beautiful addition to a beautiful game. I would highly recommend if you enjoyed the base game, appreciate the art on offer, or just want to see those missing 17 parks.