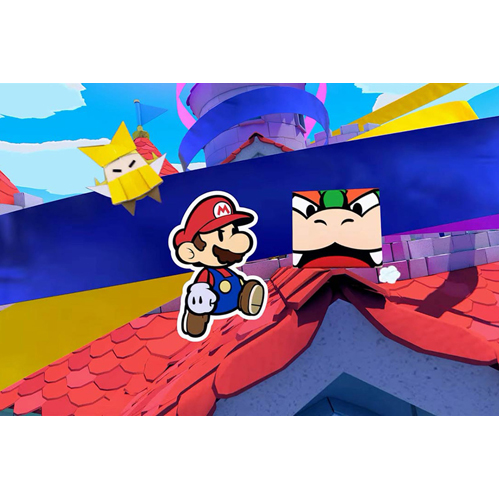 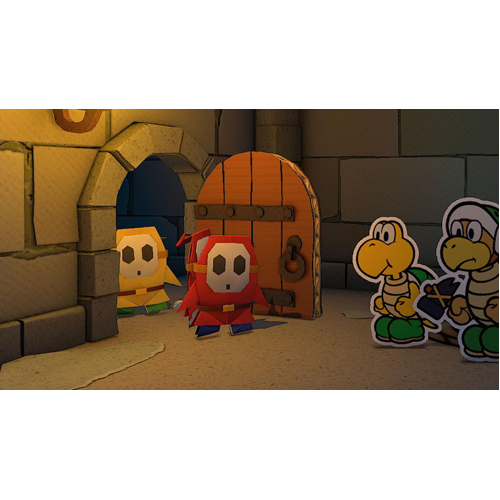 you could earn 4184 victory points

you could earn 4184 victory points

A beautiful paper world to unfold! Join Mario and his new companion Olivia on a comedic adventure that will take you to the far corners of a papercraft world in Paper Mario: The Origami King on Nintendo Switch! Face off against the Origami King and his army of paper invaders, team up with some extraordinary companions and master magical powers on your quest to save the world.
Read More
Category Video Games Tags 6-8 Years, Action/Adventure Video Games, Gamer Gifts, Nintendo, Nintendo Switch, Software, Super Mario, Super Mario Video Games, Value For Money SKU VKM-NINA116.UK.45ST Availability 2 in stock
Share
Share this
89%

A beautiful paper world to unfold!

Join Mario and his new companion Olivia on a comedic adventure that will take you to the far corners of a papercraft world in Paper Mario: The Origami King on Nintendo Switch!

Face off against the Origami King and his army of paper invaders, team up with some extraordinary companions and master magical powers on your quest to save the world.

It is nearly 20 years since the very first Paper Mario game first released on the Nintendo 64 and now, he’s back for the sixth edition of the franchise. For something that was surely first released as a gimmick (“paper” 2D characters in a 3D world – I mean come on!?), Nintendo must be laughing all the way to the bank at the success that these games have bought. And, let’s be honest they have every right to be as Paper Mario Origami Kingdom, yet again proves, flat is fun!

Like with any Mario Game, Peach is in trouble again *sigh* (by this point I really don’t know why Mario bothers, but there you go)! However, this time she’s been origami-ed – which does sound a lot more painful than the characters seem to let on in the game. Yes, as a major plot twist to any Mario game, it appears that Bowser is not the main culprit behind the princesses’ malediction. This is great news for us, the players, as he and his minions get to play the role of the game’s comic relief which is executed so well throughout Origami Kingdom (who knew that one of the Goombas is actually a Mario super-fan!?).

Not only is Peach in trouble, but the whole of the mushroom kingdom has been taken over by King Olly, who some would say has an unhealthy obsession with folded paper. Like Paper Mario, it is your job, aided by your very own papery sidekick, to save the kingdom and ultimately eliminate the clearly very dark art of Origami.

Peach of a Game

Unlike former Paper Mario games, this one is set in an “open-world” and what an open world it is! This is such a pretty game and although, as mentioned, it may seem a gimmick, the cute 2D art style is so effective; it kind of reminds me of stop-animation (think Fantastic Mr Fox) which gives the game a real individuality that makes it a unique experience.

Much like the 3D Mario Games (upsell points to me!), in Paper Mario you have the ability to explore and defeat enemies as you wish rather than the linear experience of the side scroller Mario Bros (more points ). I personally love this, as it gives the player the opportunity to tackle areas as they see fit.

The openness of the game gives a nice constant flow to the game and gives a good reason for you to go back and achieve 100% in each area. However, as part of the linear storyline, the open world-ness is pretty much limited to occasionally travelling back to toad town as your base to upgrade your gear, or more importantly, check out all those shiny collectables you’ve been striving to get!

As you would expect from a Mario game, defeating enemies mainly involves jumping on them (why change a winning formula!?). However, this time Mario gets the joy of having his very own hammer! Throughout the game, the hammer acts as Mario’s secondary weapon (if you can count jumping a weapon), as well as having a variety of other uses as the game progresses. However, let’s be honest you’re just going to end up using it to smash as many things as possible in the various worlds. This is especially true if you want to find all the hidden objects in the game and achieve that oh so sweet 100% achievement score at the end of the game!

What makes combat different in Origami Kingdom is that, rather than defeating an enemy when you jump on - or hammer – them, you are transported to an arena where the combat becomes an RPG affair. Unlike other RPG games, it’s not as simple as selecting an attack and then waiting for the enemy to respond; in Paper Mario, each battle is a puzzle where you have to line up all the enemies on a turn-table style roundabout in order to take them out all out in one go.

In the first few battles, this is a relatively easy turn of a few cogs and away you go beating up the enemies, but as the game progresses the puzzles become gradually harder and harder with more complex patterns of enemies to arrange. I must admit that the difficulty of some of these puzzles has left me trying to avoid certain enemies because they’ve ended up costing me a lot of my precious health points!

Thankfully, you are not alone in your battles! If you want to do well in this game/avoid too many replays you need to use the power of the toads! They can be utilised to provide you more time to line up the enemies or directly deal them some damage. In order for them to do this, you do of course have to pay them in shiny gold coins (no one ever heard of a favour before?). However, before you can use them you first of all need to find them…

Due to their town being taken over by a power-crazy, paper maniac, the toads have gone into hiding spread across the kingdom! Finding the toads is actually a joy in itself as not only do you feel a great deal of satisfaction from knocking one out of a tree, but the commentary they provide to the adventure is one of the game’s highlight (be prepared to question Luigi’s origin story!). Although, the desperation of trying to find more toads may just leave you hitting anything and everything you can with your hammer – yes, confusingly you free many toads by smashing them as hard as possible, no need to question the logic.

This is a fantastic entry into the Mario franchise, let alone just the paper one. The gameplay is smooth and flowing, there is a gradual learning curve allowing for new gamers (my girlfriend loves this game despite a lack of interest in video games) and the humour is fantastic; this game is not afraid to poke fun at itself and the Mario universe as a whole. I really love any game that doesn’t take itself too seriously.

All of that and I haven’t even mentioned the visuals! I cannot stress enough what a beautiful game this is, although half of the time you may be going hammer crazy on the world’s various vegetation, the other half you’ll certainly be taking in the beautifully crafted settings. Yes, the battles and lining up enemies can sometimes become repetitive and some of the collectables are just a bit too hard to find (although when you do find them it is so satisfying!) but that is a minor complaint against a great game! If you have a switch and are tired of the old formulaic Mario games and looking for something a bit different then this is for you. Check Paper Mario out today here!