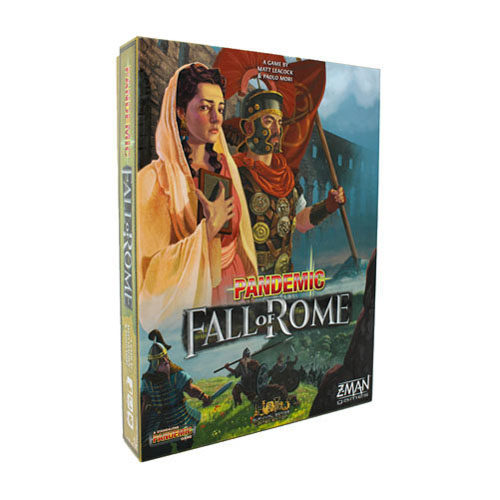 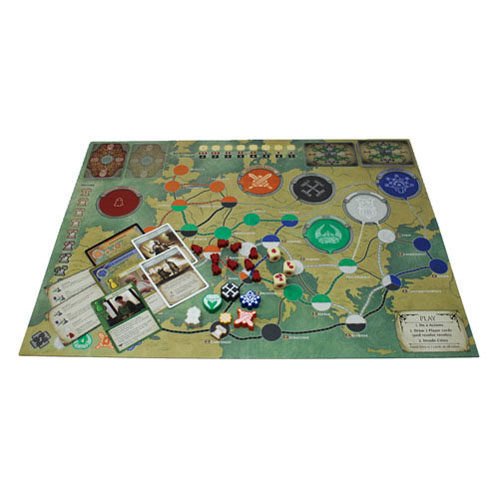 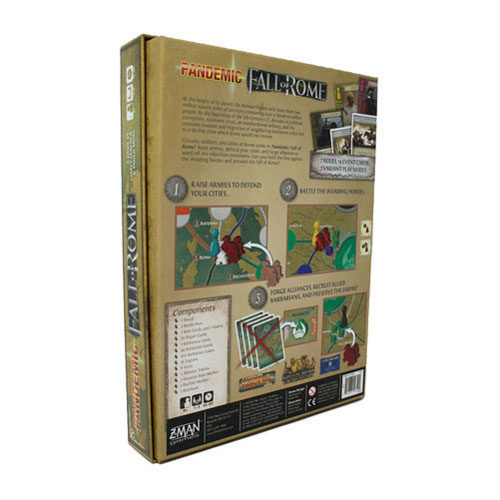 Pandemic: The Fall of Rome

Add to Wishlist
At the height of its power, the Roman Empire held more than two million square miles of territory containing over a hundred million people. Throughout the centuries of its existence, the Empire brought major advancements in engineering, architecture, science, art, and literature. By the beginning of the 5th Century, decades of political corruption, economic crisis, and an overburden…
Read More
Category Board Games Tags Best Sellers, Gold, Matt Leacock, Pandemic, Paolo Mori, Z-Man Games SKU ZBG-ZMG7124 Availability 5+ in stock
Share this
85%

At the height of its power, the Roman Empire held more than two million square miles of territory containing over a hundred million people. Throughout the centuries of its existence, the Empire brought major advancements in engineering, architecture, science, art, and literature. By the beginning of the 5th Century, decades of political corruption, economic crisis, and an overburdened military had exacted a severe toll on the stability of the Empire. This paved the way for severe incursions from aggressive barbarian tribes, leading to a decline from which Rome would not recover. Now citizens, soldiers, and allies of Rome must unite to protect the Empire.

Combining the cooperative gameplay of Pandemic with innovative new mechanisms, Pandemic: Fall of Rome takes players back in history to the time of the world's greatest empire: Rome. A weakened military has left the borders open to invasion from countless tribes such as the Anglo-Saxons, Goths, Vandals, and Huns. As you march through the Roman Empire, you must recruit armies, fortify cities, forge alliances, and face off against the invading hordes in battle.

Simply defending Rome is not enough; players must find a way to stop the incursions and find peace with their neighboring peoples. Players collect sets of matching-colored cards to forge an alliance with the different tribes. In doing so, they gain the ability to use cards matching the tribe to convert other members of that tribe into Roman soldiers, furthering their ability to hold the line against other invaders.

Take on unique roles with special abilities to improve your team's chances to protect against the invaders. Work together, use your skills wisely, and stop the fall of Rome!

Pandemic: Fall of Rome includes a solitaire mode in which the player takes on the burden of being the Emperor and commands three different roles to try to protect the city from the invading hordes. Players who want a more difficult game can try the "Roma Caput Mundi" challenge by adding more Revolt cards to the deck; they must also respect the law in Rome that Roman legions are not allowed in the city.

In 2018 there were two new versions of Pandemic – The 10th Anniversary Edition and Fall of Rome. Pandemic is many people's first experience of co-operative gaming and it has had a big part in defining that genre.

If you’ve fought off disease in the many previous iterations of Pandemic, and you're looking for something a little different, then Pandemic: Fall of Rome is one of a number of slight variations that have been released in the last couple of years. Fall of Rome is the first box with the label "Survival Series" - seemingly sparking a new range of games that might not all be about disease.

Fall of Rome is a 1-5 player co-operative game set in the time of the Roman Empire. A weakened military has left your borders open to invasion from a myriad of forces such as the Anglo-Saxons, Goths, Vandals, and Huns. In order to defend Rome, you will march through the land recruiting armies, fortifying cities and fending off the invading hordes.

Fall of Rome follows the common Pandemic style of play. There are five colours of cubes, and should you collect enough player cards in their colour then you can ally with that colour. This lowers, though doesn't remove, their threat. However, while the grand picture may be similar, the details are all very different.

Instead of being able to simply remove cubes, you'll need to bring legions with you. When trying to defeat barbarians you roll one die per legion with you (up to three), each die can vary from two dead barbarians to a dead legion with no barbarians killed. Should you ever run out of legions, you'll need to return to/construct a fort to recruit new soldiers from. Legions also serve as a defence mechanism, preventing barbarian cubes being placed in their city. Legions do die when then do this, so you have to keep your defensive line well maintained.

Each player has a unique leader who provides a special player power. These are all extremely potent, forcing players to diversify their playstyles in order to best match their powers. Even in combat one of the die rolls triggers a special ability. Some characters gain strong bonuses when this happens, but others lose their own troops as much as they defeat barbarians. These unique player powers help keep the game fresh as each one plays differently, but also each combination will have different capabilities too.

Events have received a shake up, with all event cards now giving a choice. You can play it normally for a weak version of the event, or you can cause a point of decline (Fall of Rome's equivalent to outbreaks) in order to gain a stronger variant. Of course, too much decline and you lose the game, so how much you want that more powerful event is up to you! 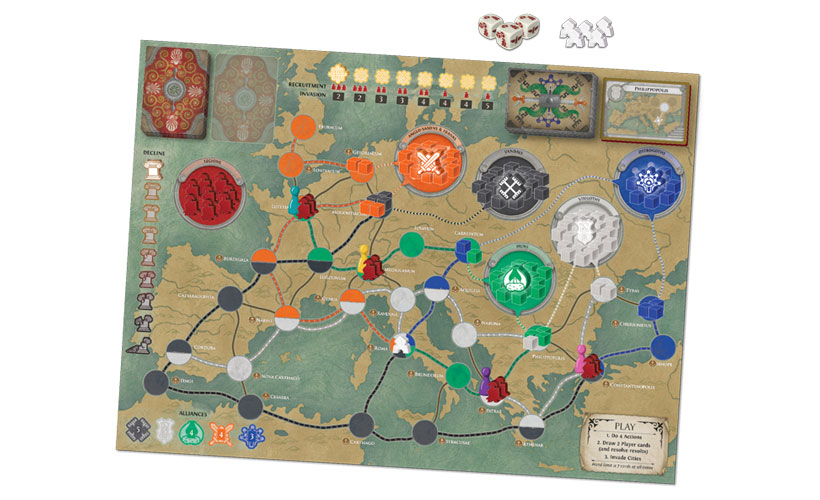 Amy’s Thoughts on Fall of Rome

Fall of Rome definitely feels like a Pandemic game. The basic formula shines through even with the new twists added. There is certainly a bigger emphasis on pushing your luck this time round, with the dice rolling and hazardous events. This, combined with cross-board travel being harder, makes you weigh each decision that bit more carefully. I really enjoy the unique player powers, each difference is major.  While everyone can do everything to some extent there are some characters who really shouldn't be fighting if there is another choice etc.

The addition of eradication as an end game trigger is also welcome, no longer can you reach a point where there aren't enough cards to cure the last disease. If they won't join you, beat em' as the saying goes...

Overall, Pandemic: Fall of Rome is a great version of Pandemic, but it does simply feel like just another Pandemic. Sure, this one has dice rolling and a military theme, but if you don't like Pandemic then Fall of Rome won't change your mind.

Some of the new mechanics could feel a touch clunky (such as where barbarians could invade), but in general I approved of the changes. In particular, the new events and the option to win by killing all the barbarians you aren't allied with creates a more dramatic game, with desperate last gambits to push barbarians back where they came from.

Would I recommend this or the original? Certainly, Fall of Rome shows the advantages of the 10 years between the two. The art and game design have both improved in that time. It is a little more complicated, but for the gamer in your life Pandemic: Fall of Rome is the superior version of the game. As to whether it is better than our current favourite, Pandemic: Iberia... well that's a different story... 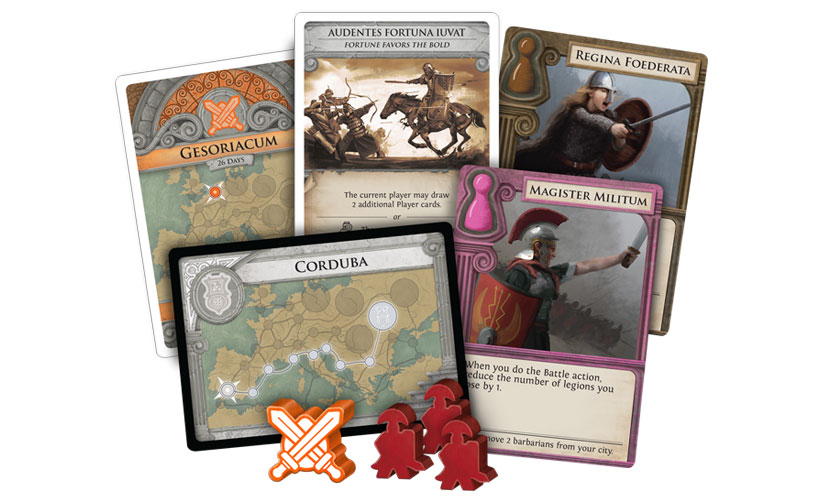 Fiona’s Thoughts on Fall of Rome

The changes implemented in Pandemic: Fall of Rome certainly make it different enough from the original. I also believe they have increased the complexity level slightly. For this reason, it wouldn't be the first co-operative game I introduce to friends.

The additional complexity comes from a couple of factors, including the movement of invading forces, that make it a little more challenging to identify risks. The recruiting of legions, which is a whole new action in the game, and the push-your-luck aspects of attacking, which mean that you need to take slightly more calculated risks. I've really enjoyed how close many of our games have come in the last few turns and how we've really had to solve an interesting puzzle to figure out whether we can win the game. However, if you're likely to be annoyed by losing the game on a final dice roll, then this might not the right edition of Pandemic for you!

We've played every edition of Pandemic, and Fall of Rome is probably the most thematic version we've played. Although it's slightly fiddly, the way that the invasions work is really clever. The sacking of Rome is also an end game loss condition. Therefore, you are not only concerned about the cities on three cubes, but you also want to take care of the individual cubes that are on the cities adjacent to Rome. This can be a lot of ground to cover in a two-player game. Fortunately, with the special abilities each player has, as well as the ease of sailing long distances around the map, you can still cover all of your bases.

Given the size of the Pandemic range, it's difficult to work out which is best for you. If you've only ever played the original, have no interest in legacy games, and are looking for a step up, then Pandemic: Fall of Rome would be a good choice.

Fiona and Amy can also be found at the Game Shelf, with weekly reviews from a couple’s perspective.