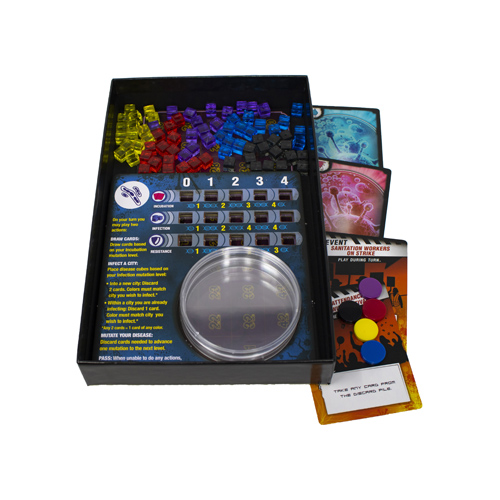 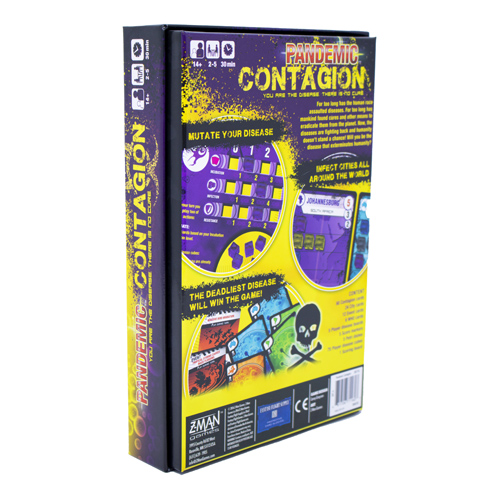 you could earn 2155 victory points

you could earn 2155 victory points

Pandemic Contagion – After many years of trying to defeat the diseases that threaten mankind’s existence, the tables have been turned. You are now the disease and guess what? There is no cure. In Pandemic: Contagion, you are competing against other diseases (fellow players) to see who can eliminate humanity. With no cure to be had, the one of you that wipes out all human civ…
Read More
Category Board Games Tags 9+, Board Games, Pandemic, Teens, Z-Man Games SKU ZBG-ZMG71160 Availability 3+ in stock
Share
Share this
80%

Pandemic Contagion - After many years of trying to defeat the diseases that threaten mankind’s existence, the tables have been turned. You are now the disease and guess what? There is no cure.

In Pandemic: Contagion, you are competing against other diseases (fellow players) to see who can eliminate humanity. With no cure to be had, the one of you that wipes out all human civilisation will come out on top as the most deadly disease ever known to man, may he rest in peace.

Pandemic: Contagion includes a deck of contagion cards with differing colored borders, city cards with similar colored borders, event/WHO cards, player disease card and disease cubes. On a turn you take two of three possible actions, and you can take the same action twice. Those actions are:

Event cards are drawn at the start of each round and affect everyone during their turn. You might benefit from the card or it could have a negative impact. WHO cards are always bad, but your resistance will lessen whatever the penalty would be based on its level, if you planned ahead.

Reviewing a game called "Pandemic: Contagion" seems a bit close to home in 2022, but this spin- off's gameplay is relaxed and fun which makes the themeless about death and more about points.

Released in 2014, Pandemic: Contagion switched the narrative of the original game. Instead of fighting the disease, players get the chance to become it, and take over the world. This instalment is all about crushing your opposition rather than playing cooperatively.

There are a few parts to Contagion's setup, but the steps are simple, quick and easy to follow. Coloured contagion cards are dealt to each player. Depending on the number of players, city cards are placed face up where everyone can see them.

The hardest part of the setup is organising the Event and World Health Organisation (WHO) cards. Each time you start a game you need to remove 3 WHO and 3 Event cards. After this, you must order the cards into a separate draw pile, with the WHO cards spread equally throughout. Mixing the cards this way adds to replayability as you never know which Events are going to crop up.

Now it's time to play.

The aim of the game is to eradicate cities. Players win by scoring points through death tolls. The player with the highest score wins. It seems dark, but the theme never feels true to life as diseases are unspecific and represented by cubes.

The game sequence is easy to follow. Players turn over the top Event card and resolve its positive or negative effect. Event cards usually provide a buff, like free upgrades (mutations) or faster infection rates, whereas WHO cards are brutal! WHO cards will have you downgrading mutations or removing loads of disease cubes. These can have disastrous effects on your score.

The game ends when there are only 2 cities left on the table or when the last WHO card has been turned over and that round is resolved. Scores are totted up and the disease that did the most damage wins!

But what actions can players take to become the victorious virus?

Actions are displayed on player boards which make it newbie friendly. Players can draw cards, infect cities or mutate their disease.

Contagion cards are the main currency in the game. Doing any action will require you to spend multiples of them. Drawing cards is therefore essential as otherwise, you can't progress.

Infecting cities is the main way to get points and increase your score. Infecting cities costs 2 contagion cards of the same city colour. Depending on the player's mutation status, they may put 1,2,3 or 4 infection cubes on the city. The player with the most cubes, on the city, will get the top score for that card.

Mutating your disease upgrades your actions but doing this will require a lot of cards. You can mutate your incubation (how many cards you can draw each turn), infection (how many cubes you can place each turn) and resistance (protection from negative effects lurking in the Event deck).

City cards are the main way to earn points and players will spend most of the game fighting over them. Each city has their own population level. For example, Paris has a population of 4. Once 4 disease cubes have been placed on this city it is eradicated. The three players with the most cubes on the city will earn points when it's wiped out.

Also, each city has their own perk, which can only be used once the player wins the card. The last player to add a cube to the city will win the card's perk, regardless of if they have the most cubes or not. Snagging city perks is a good way to play as you can gain extra actions to help you later.

Figuring out the winner is simple: to win this game, players must have the highest score. Points are accumulated throughout the game by doing several actions: eradicating a city; mutating your disease; or having the most cubes during a death toll.

Winning points requires strategy and skill but also a bit of luck, as you never know when the death toll will take place.

To make the game balanced for 2, Contagion provides a different setup. In this version, only city cards with the 2-player symbol are added to the deck. Players also introduce an AI player. At the start of each round, before the Event card is turned over, players will turn over a contagion card instead. The AI will then place a disease cube in the city that matches the contagion card. If there are no cities which match the card's colour, players draw until one does. This AI player gets scored like everyone else.

The AI adds a bit of spice to the 2-player gameplay as you battle against an unknown foe. However, the 2-player variant is short lived as there aren't many cities in the deck. Thus, the game usually finishes due to a lack of cities rather than turning over the last WHO card.

It's a nice addition and makes a group game playable on a smaller scale but it's not as much fun. Rounds are short and there aren't as many cards to grab.

Like other Pandemic games, Contagion is well made. The components are quality and include nice flourishes like petri dishes for your disease cubes. A nice thematic touch. Cards are on good stock and designed with vibrant illustrations. Who said disease had to be dreary?