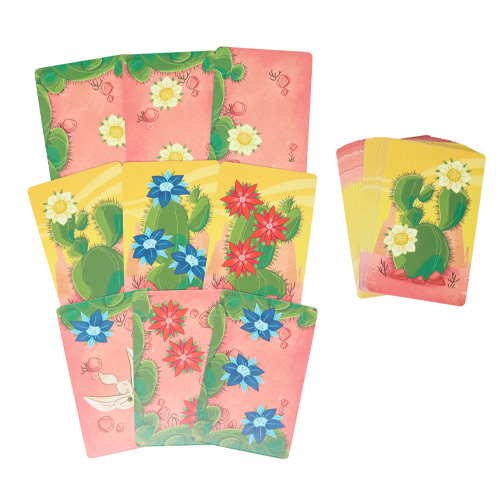 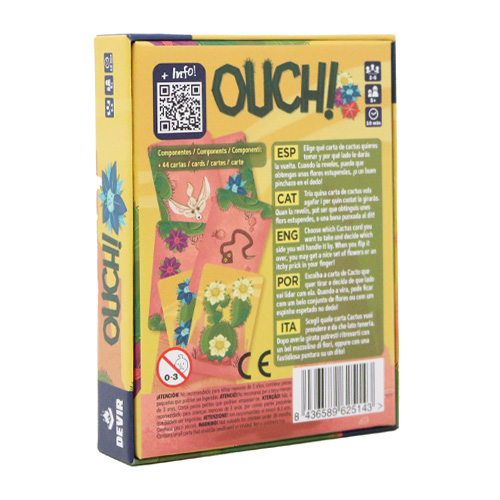 The desert cacti protect beautiful flowers…but watch out for the stickers! To win in Ouch! you collect the loveliest flowers in the desert, avoiding the sharp cactus spines. You can count on the help of the snakes and foxes, taking turns to assemble eye-catching bouquets. Ouch! is a fun card game that you can play with younger kids or among friends. Keep your fingers safe! A g…
Read More
Category Board Games Tags New Releases, Zatu Exclusive, Zatu Silver Award SKU Z-THKO-DEVOUCH Availability 3+ in stock
Share
Share this
70%

The desert cacti protect beautiful flowers...but watch out for the stickers! To win in Ouch! you collect the loveliest flowers in the desert, avoiding the sharp cactus spines. You can count on the help of the snakes and foxes, taking turns to assemble eye-catching bouquets. Ouch! is a fun card game that you can play with younger kids or among friends. Keep your fingers safe!

A game for the whole family, especially for the younger ones.

It is a game of luck, and hope. Hope that you don't flip over a card and see a cactus, because Ouch! that would hurt. The diverse playing times make it even better, as it can be played whenever, and wherever.

Created by Devir games, Ouch! is a compact card game for 2-5 players. With 44 cactus cards in the box, players will take their time choosing which cactus flowers they want to pick before gambling. Be careful though, if you choose the wrong side, you may find yourself getting prickled by a cactus!

How To Play Ouch!

Each cactus card has flowers on it. Players want to collect as many flowers as possible to win the game. When selecting a card, players must announce which side they are picking it up from; top, bottom, left or right. Once selected, they must flip the card over. If they have picked up a side which has a prickly cactus on it the player must exclaim ouch! If pricked, they must discard the card.

If the player doesn't select a prickly side, they get to the keep the card. Cacti with more flowers will have more prickles overleaf. Red flowers are doubly dangerous. When players select these cards, they have a chance to lose more. If players get stung by a red cactus, they will have to discard a card they have previously won!

Some cards display animals, the fennec or snake. If players successfully get a fennec card, they immediately get another go, but if they get pricked on this go, they lose both cards. If players pick up a snake card, they have the chance to steal the next persons card, if that player is unsuccessful.

The game ends when one player wins 8 cards, or the draw deck is depleted.

Much like the rules of Ouch!, scoring is easy. Players get 1 point for each flower they have collected. There are also bonus points to be won. Players will get an extra 4 points for each set of 4 flowers with different colours. Additionally, the player with the most red flowers will get a bonus of 5.

The scoring may be straightforward, but it does add some strategy to an otherwise luck-based game. Players will take risks with red flowers and try to collect each flower type. It also adds incentive to play dangerously and select cacti with multiple flowers.

Ouch! is a simple card game. It's not a game to tease your brain or spend hours playing. It's a quick 10-minute game which works best as a starter or something to play between activities. If you're setting up another board game, Ouch! will entertain your guests while they wait. It's also a great game to play with drinks.

Yet, despite its vibrant appearance, Ouch! can become dull over time due to its simplicity. I soon found myself wanting to play around with the rules to make it harder and add some spice to the gameplay. I wanted more cards to choose from!

For what it is, Ouch! is fun and works as intended. It's easy to teach young players and works with beginners. But it's not a staple game, rather one you'll whip out to fill downtime.