Continue shopping “Extra Card Decks: Down In Flames – Aces High” has been added to your basket. 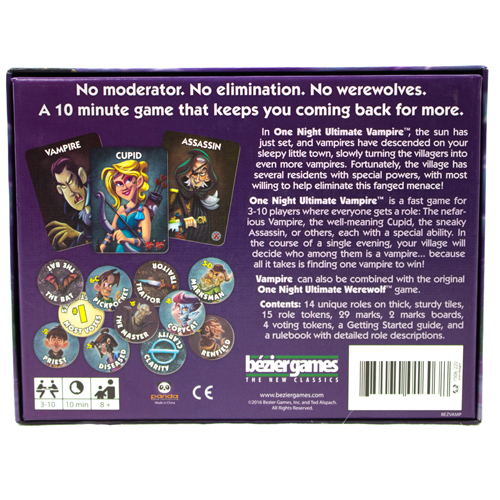 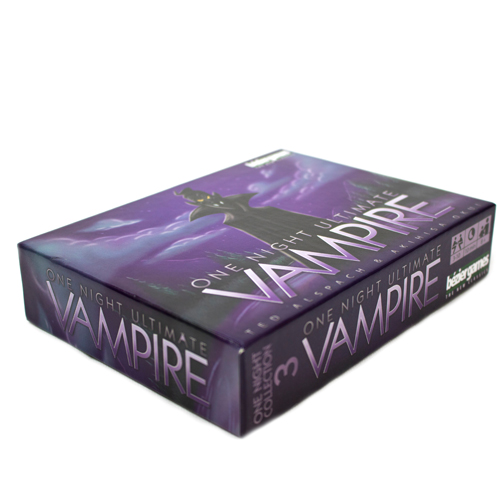 In One Night Ultimate Vampire, the sun has just set, and vampires have descended on your sleepy little town, slowly turning the villagers into even more vampires. Fortunately, the village has several residents with special powers, with most willing to help eliminate this fanged menace!.
Read More
Category Board Games Tags Akihisa Okui, Bezier Games, Podcast Approved, Ted Alspach SKU ZBG-BEZVAMP Availability 5+ in stock
Share
Share this

In One Night Ultimate Vampire, the sun has just set, and vampires have descended on your sleepy little town, slowly turning the villagers into even more vampires. Fortunately, the village has several residents with special powers, with most willing to help eliminate this fanged menace!

One Night Ultimate Vampire is a fast game for 3-10 players in which everyone gets a role: The nefarious Vampire, the well-meaning Cupid, the sneaky Assassin, or others, each with a special ability. In the course of a single evening, your village will decide who among them is a vampire...because all it takes is finding one vampire to win!

If you are looking for a party game then you should look no further than the One Night Ultimate Werewolf series. This intriguing game is certain to help get the party going as you all begin to accuse each other of being the wolf!

The Zatu Games team spent the evening playing this game and we all had a great time - with many of us purchasing the game afterwards. We just couldn't get enough of its addictive nature and wanted to play it over and over again.

So, you may be wondering, what makes this game so entertainingly addictive? Well let me take you through a typical game and you will soon understand.

A game of One Night Ultimate Werewolf

For our game we had a mixture of the original and Daybreak Expansion cards in use. Alongside the cards you will need to download the app for your mobile phone.

The app contains the instructor! Now the instructor not only sounds really epic but tells you how to play the game. As you are setting up the game, you will select the characters that are being used on the app.

To play One Night Ultimate Werewolf everybody needs to sit around a table or in a circle on the floor. One card is given to each player who must look at which character they have been given, before placing it face-down in-front of them. You must ensure that nobody else sees your card or else your game plan could be ruined.

Three other cards are also placed into the middle of the circle - face down so that nobody knows what they are. Once everybody is settled it is time to play.

The instructor will tell all player to close their eyes - scary I know! Then he will begin announcing characters one at a time, telling each player which move they may do.

Some characters can help raise havoc upon the game. Cards will be swapped, centre cards will be looked at and characters will awake at the same time to greet each other. Of course the aim of the game is to discover who the werewolf is.

Once every character has played their turn, the instructor asks you all to open your eyes. The timer will begin and you must now all work together in order to find the werewolf. This is where the fun starts! Accusations fly around the circle and some players must lie in order to protect themselves - and others.

The game certainly doesn't remain quiet as the voices get louder and laughter begins the fill the room! It is brilliant! At the end of the countdown everybody makes their vote and points to the person who they believe is the werewolf.

Will you team 'shoot' the right person? Or will you end up on the losing team as the werewolf celebrates?

Here at Zatu Games we have three different versions of One Night Ultimate Werewolf for you to choose from - although for the craziest game we suggest you order all three!

We have the original One Night Ultimate Werewolf pack which contains characters such as the Seer, Robber and the Troublemaker. We also have the Daybreak expansion pack, which introduces 11 more roles to the game. These include the Mystic Wolf, Bodyguard and the Village Idiot.

Finally, we have the One Night Ultimate Vampire game which can be played as a standalone game or as a combination of all the editions.

One Night Ultimate Werewolf is thoroughly enjoyable and will keep you coming back for more! We ended up playing game-after-game here at Zatu Games - and we certainly did not get bored.