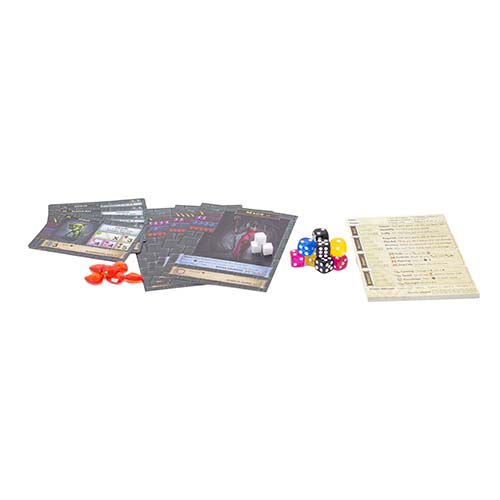 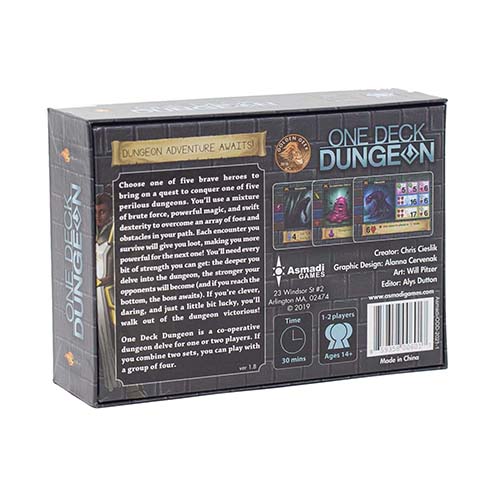 you could earn 1937 victory points

you could earn 1937 victory points

Adventure calls…but you don’t have four hours or the desire to set up hundreds of pieces. You want action now! One Deck Dungeon lets you jump right in, bash down doors, roll dice, and squash baddies with style. By using each of the cards in four different ways (as an encounter, XP, a skill/potion, or a stat-boosting item), all the experience of dungeon delving has been f…
Read More
Category Board Games Tags Accenuate Games Limited, Chris Cieslik SKU ZBG-AGL0080 Availability Restock Expected
Share
Share this
85%

One Deck Dungeon is a card game "roguelike" — a dungeon delve that is different every time, difficult to survive, with a character you build up from scratch. The deck consists of various foes to combat and other perils from the dungeon. Each card, though, depicts both the obstacle to overcome and the potential rewards for doing so. When you defeat a card, you claim it as either experience, an item, or a skill, tucking it under the appropriate side of your character card to show its benefits.

The longer you take exploring the dungeon, the deeper you'll delve, and the difficulty will scale up quickly! If you make it far enough, you'll have to fight the dungeon boss. Survive, and you'll be a legend!

One Deck Dungeon is designed for 1-2 players. With multiple sets, you can add more players.

Adventure calls! Lairs of monstrous enemies have sprung up from the deepest pits of creation all over the countryside. We need a Hero! Become a hero, accept your duty and conquer these monstrous foes, you will need to conquer every level of the dungeon defeating every foe and peril you meet to overcome the boss of the dungeon.

One Deck Dungeon, created by Chris Cieslik and edited by Alys Dutton, is a card-based adventure game with danger around every corner. The game is designed for one to two players and takes between 30 to 40 minutes to play.

When you open the game you will find five hero cards: a Warrior, a Rogue, a Archer, a Mage and a Paladin, each with their own unique abilities which you will use to battle the monstrous foes you encounter from the 44 card encounter deck. You will also find eight pink dice which are known as Agility dice, eight yellow which are known as Strength, eight blue dice known as Magic or Mana and finally six black dice known as Hero dice. The game also comes with 15 red hearts and six white cubes symbolising potions which will have a range of affects as the game goes on.

The overall objective of One Deck Dungeon is to clear all three floors of the dungeon and then defeat the boss to save the day.

First, you need to decide if you are playing solo or in a two-player game as each player card has two sides. Once decided, select the character you wish to play. You can choose from the following: Warrior, Rogue, Archer, Mage or Paladin. Each character has their own special abilities, for example; The Paladin in a one-player game can use Heroic Feat which allows you to roll any or all your stored heroic dice.

You collect dice using the second part of the ability when you explore the dungeon and face a 4+ experienced foe you may collect a heroic dice and store on your card up to two dice at any one time. This is quite a powerful ability as heroic dice are the only dice which can be used for any of the traits required, whereas the blue, yellow, pink can only be used for the stated trait i.e. yellow for strength.

Now that you have chosen your character you can collect the dice required to play, this is detailed on the character card you have selected. The dice you will start the game with are in the top left-hand corner where you will see yellow swords, pink shoes etc. For example, the Paladin will receive three strength dice (yellow), one agility (pink) and three magic (blue).

Now, place to the side of your character your level cards starting on level one and place one potion/white cube on the card. This can be used in One Deck Dungeon for a range of things but at the start of the game it can be used as detailed on the turn reference card to heal three damage at the start of a turn or two damage at any time.

Once you have set-up your character, it's time to set-up your adventure and choose a dungeon. Each boss card has a number of small diamonds to the right of the name, this indicates the difficulty level of the dungeon from one diamond to three. I would recommend starting on the dragon’s cave which is the easiest one to start with, oh don’t worry even easy is hard to beat!

Now you have selected your dungeon, place your turn reference card over floors two and three; these will be revealed as you progress through the dungeon making it progressively harder. Why? Each level shows a specific dice number and dice required. Any spot which has a screen shield must be filled in before anything else, meaning if you cannot fill other places which depict hearts or time you take that number of damage to your health and/or time.

Now that you have set-up the character and the dungeon boss it’s time to do the final set-up shuffle the encounter deck which will have a picture of a door on the back and place the stairs card at the bottom of the desk, once you reach this card you will be able to progress to the next level of the dungeon.

The encounter deck will also double as the time remaining and when you are told to you will remove cards from the pile placing them in a discard, this is to symbolise time lost, as you lose more time you will have less time to gain experience and abilities - making the next levels harder. Once the stairs have been revealed/exposed you have run out of time and you will start taking damage if you don’t descend to the next level.

When you have conquered a foe you may take the rewards and you have several option you can choose from. One is to take the foe as experience points, colloquially referred to as XP, which will be placed under your level one card. When you reach six experience you can progress to level two. You can also take the foe for the special ability which will be placed to the bottom of your character so you can use this in battles moving forward.

Finally, you can take the trait on right hand-side which will be placed to the right your character card and each battle you will then get the additional dice stated from that trait, making certain perils and foes easier as time goes on but you can only ever take one one these options and once you have chosen you cannot change it!.

Top Tips for One Deck Dungeon

Final Thoughts on One Deck Dungeon

One Deck Dungeon is a fantastic game which sets the challenge high. The game states it is for ages 14+, in my view it works well for two-player but due to some of the complex strategies you will need to implement such as combining special abilities, I would recommend 16+ if playing one player - depending on whether the player has familiarity with games such as One Deck Dungeon.

The game comes with a range of characters and you can go to the Asmadi Games website to download an additional hero, there are also expansions to the game such as Forest of Shadows which will add new foes and twists on rules.

I personally think One Deck Dungeon is excellent and well thought out in how you can use the foes for a range of different actions and that the encounter deck doubles as time. In my view the game plays better as a one player experience and is a key game in my one player games set.

If you are looking for an exciting one to two-player game which has high replay value and requires strategy and methodical thinking, you will love One Deck Dungeon!