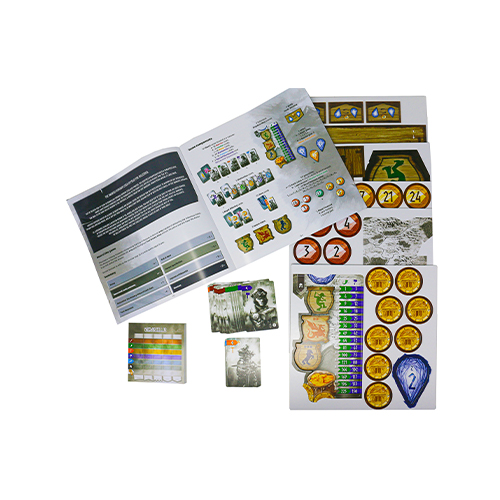 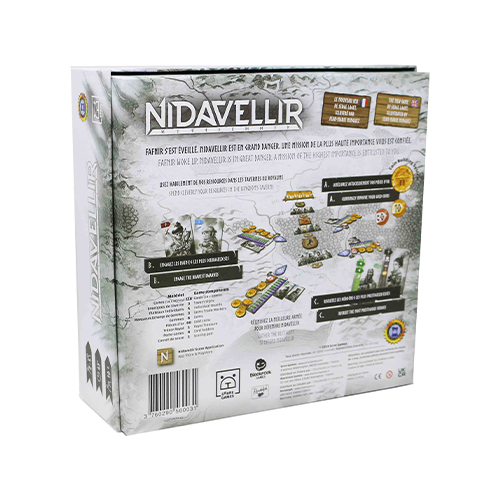 Nidavellir Nidavellir is the Dwarf Kingdom, and where Thor got his new axe in Infinity War! It is a set collection and bidding game that in someways feels more like a worker placement game because of the unique ‘coin-building’ system. Each player will take a player board and 5 starting coins. Your player board has 5 cut out spots for coins. Three relate to the three central ta…
Read More
Category Board Games Tags Best Sellers, Dice Tower, Family, GRRRE Games, Strategy SKU ZBG-BRENID01 Availability 3+ in stock
Share
Share this
85%

Nidavellir is the Dwarf Kingdom, and where Thor got his new axe in Infinity War! It is a set collection and bidding game that in someways feels more like a worker placement game because of the unique ‘coin-building’ system.

Each player will take a player board and 5 starting coins. Your player board has 5 cut out spots for coins. Three relate to the three central taverns where you can recruit your dwarfs from, and two at the bottom for the coin building mechanic.

Enough dwarf cards for each player are dealt into each tavern and then players take their coins and play them face down on to their player board, one each in the tavern spots and the remaining two at the bottom. The player who reveals the highest coin at each tavern gets first choice of the dwarves in that pub.

The coin building comes in when someone makes a bid of zero, in this case you reveal the two coins at the bottom of your board, add them together and then exchange the highest coin of the two for a coin of the combined value. Not only does this make you a more powerful bidder but also gets you points!

You will also collect the dwarves in groups which will score you points in differing ways. There are 5 different types of dwarf and each type scores uniquely. when ever you collect one of each type this allows you to recruit another hero - special cards that are more powerful.

The game is played over two ages, with an evaluation at the end of age 1 and final scoring at the end of age 2. The components are brilliant with fantastic art work and a step coin holder to manage your coin building. Nidavellir is a unique bidding game that works brilliantly and provides something new and different in the board game world.

Nidavellir is the home of the Dwarves and in the Marvel Cinematic Universe that happens to be a Neutron star where Thor’s hammer was forged and where the handle of Stormbringer was forged through Groot’s sacrifice... but I digress. For this board game has nothing to do with Marvel but is instead based firmly in Norse mythology. Nidavellir is a fast, smooth, bidding and set-collection game with an element of engine building for 2-5 players.  The box suggests a playtime of 45 mins, which in my experience is about right.

In Nidavellir you are an ‘Elvaland’, a respected member of the council and chief of war. You’ve been sent by the King to round up Dwarves by offering them what they love most - gold. Apparently, the kingdom is in peril due to Fafnir the dragon preparing to torch the place. Every round, you will visit three taverns. In each tavern will be a set of Dwarves that you and your opponents will be bidding to hire with your limited set of gold coins. Over the course of the game, you will build up a large tableau/army of dwarf cards that score in a variety of interesting ways. You’ll need your finest dwarf bribery skills to build a stronger army than your opponent and impress the King. And what do all Kings love even more than gold? Victory points of course.

Simultaneous Bidding with an Engine-Building Wrinkle

Each player only ever has five ‘coins’. These are bidding tokens with a numerical value on one side. All three taverns are in view, each with a number of face-up dwarf cards (the number depending on player count). Simultaneously all players decide which 3 of their 5 coins they wish to bid face down on their own player board, one for each tavern.

If you see a particularly juicy dwarf (I regret using that word already) in one of the taverns, then you probably want to bid your highest coin.  But a glance at your neighbour’s tableau of cards tells you that they will be desperate for a dwarf in a different tavern. So they won’t be bidding high in your area….so can you safely drop your bid? These are the crunchy decisions that appear in every round. All player tableaus are face-up, keeping you guessing about your opponents’ desires and how much you are willing to risk.

Your Gold is Better Than Their Gold

But I said you had 5 coins and you only have 3 places to bid. This leads us to an interesting engine-building wrinkle in Nidavellir - certainly something I haven’t seen in a bidding game before. One of your coins is a zero. In other words, if you bid using that coin, you are usually guaranteed to get the last choice and hence the least juicy dwarf (there’s that word again). So why would you use this worthless token? Because it will allow you to upgrade one of your coins to a higher value, increasing your bidding power in future rounds and providing you with substantial points at game end.

On the table is a three-tiered cardboard structure holding an array of new higher valued coins for you to acquire. The two coins you didn’t use during bidding sit in your pouch. When you bid with a zero coin, you add the values of the two coins in the pouch. This is the value of the new coin you can grab from the structure. Hand in the highest value of the 2 in the pouch back to the structure, and take your newly valuable coin - or an even higher value one if yours isn’t available.

You now have more power to bribe the blood-thirsty beardies in the next round. Over the course of the game, your coins can increase substantially in value and they all go towards your final score. Ties for coin bids are broken by a system of gems that get swapped around after a tie-break and this works quickly and easily.

But what are these dwarves you are recruiting? There are 5 different classes of dwarf, each class scored using different rules. You are creating an army in the form of cards where every column is made of the same class and there are five columns in a row, one for each class type. The Blacksmiths and Hunters score according to either squaring the number or an arithmetic progression - don’t run away in mathematical horror! That’s all handled by the player board which tells you at a glance your current score in those 2 classes.

The Explorers simply add their point values as do the Warriors. But if you achieve the most Warriors by game end, you get to add the value of your highest coin - another motivator to boost your coins. Finally, the Miners are scored by multiplying their sum of values by how many you have. So it's worth getting even zero-point Miners as every one boosts the final total. Its all pretty straightforward but provides a richness of strategy and multiple paths to victory.

As well as the cardboard structure holding the upgraded coins, there are four card stands displaying an array of hero and distinction cards. Whenever anyone completes a row of 5 different dwarves, they can recruit a hero. This can lead to chain reactions where a new hero completes a new row allowing potentially yet more recruitment of heroes. If you’ve planned well, you can get satisfyingly large combos.

The whole game is divided into 2 ages corresponding to 2 decks of recruitable dwarves. Once the first deck is exhausted, the mid-game scoring assesses who has the greatest number of dwarves in each of the 5 classes. The winner of each class receives the appropriate distinction card. Some of these provide ongoing benefits, others go straight into your army, possibly completing rows of 5 and triggering yet more combos of hero recruitment.

The primary joy of Nidavellir is the constant cycle of tension and resolution combined with fast gameplay. Everyone simultaneously thinks and bids. The tension builds as bids are placed and the great reveal leads to joy or horror of what you’ve won or lost. You’re working on your personal puzzle but with a vested interest in everyone else’s.

The simultaneous bidding on all 3 taverns makes turns fast and lets the game scale perfectly to higher player counts, similar to drafting games like 7 Wonders. Before you know it, the game is approaching its end. Time flies and Nidavellir certainly doesn’t outstay its welcome.

The fixed number of bidding tokens per player with variable values is very reminiscent of the Reiner Knizia classic Ra. In fact, Ra is clearly one of the key mechanical sources of inspiration for this game and that is no bad thing.

I was sceptical that the game would work at 2 players but was pleasantly surprised. At two-players, the game is looser, as 2 players are each bidding on one of 3 cards. So you spend more time looking at your opponent’s tableau to outguess them. But at 3 players the game truly shines and the tension over the bidding is more palpable.

The manual is well written and precise. Personally, I found its layout a little counterintuitive with many disconnected explanatory boxes. But this is a minor gripe. At the back of the manual are actual biographies of the various heroes. Hidden within them are useful strategy tips. The artwork is pleasant but not astounding, and the graphic design is very clear. The box is of the smaller type. The coin display stand is a one-time construction that thankfully fits back in the box along with everything else. But you do have to populate it with coins every time you set-up unless you decide to keep the box flat when storing. The scoring pad is most welcome.

The only minor criticism I have of the production is the amount of table space required. For a relatively light game, it is sprawling. Four card stands each with 5-7 cards in them take up considerable space. I think it would have been better if the taverns had the cards placed on them instead of next to them to save space. Each player will end with a tableau of around 20 cards together with their player board. That said, I consider this a first world problem.

The replayability will be reasonable for at least a dozen plays. I can easily imagine an expansion and have heard rumours the designers are working on one. Overall, I consider this one of the best light to medium weight bidding games available today! I'd strongly recommend Nidavellir to all but the heaviest euro enthusiast.