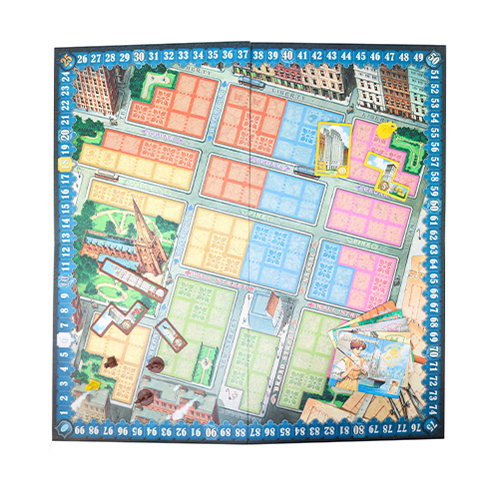 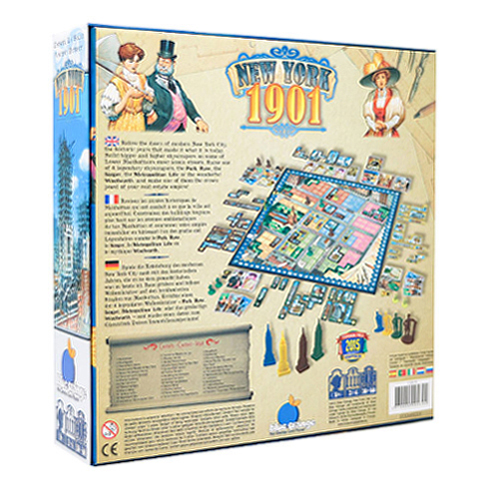 RRP: £34.99
NOW £28.99
RRP £34.99
Earn 2899 Victory Points
Success! We will let you know when this product is available again.
Your email address has been unsubscribed!
Your email address has been unsubscribed!
Notify me when this product is available to purchase!
This email address is already subscribed to this product!
New York 1901 takes you back in time to (you guessed it!) the start of the 20th century. This is a wonderful family board game from designer Chénier La Salle and Blue Orange Games. New York 1901 is a fun, lightweight strategy game with wonderful physical presence on the table. Centre of it all are the famous Manhattan skyscrapers. Watch them climb skyward before your very eyes… N…
Read More
Category Board Games Tags Best Sellers, CoiledSpring, Zatu Silver Award SKU TCS-NY1901 Availability Out of stock
Share
Share this
75%

New York 1901 takes you back in time to (you guessed it!) the start of the 20th century. This is a wonderful family board game from designer Chénier La Salle and Blue Orange Games. New York 1901 is a fun, lightweight strategy game with wonderful physical presence on the table. Centre of it all are the famous Manhattan skyscrapers. Watch them climb skyward before your very eyes…

New York as a city started life in a far more modest state, but you’re about to help change that. A new dawn is approaching NYC, and you’re going to help construct some iconic skyscrapers. The action takes place in Lower Manhattan, in the Financial District. The aim is to score the most points, by building bigger and better towers. You do this by drafting cards, and tile-placement.

The main board is set up like a series of empty city blocks, all split into grids. Players start with a selection of building tiles shaped like polyominoes. On your turn you can claim a card from the public flop to claim a matching size/space within the city. Plus, you can then place one of your building tiles within your claimed land. (Providing the tile doesn’t overhang, and that it’s touching a road.)

To start, you place bronze, simple buildings. Later you can demolish these, and building on top of the land with silver, and (later on) gold buildings. These tiles increase in value, but at the same time they’re larger, so tougher to place. You need to play smart to buy land that’s adjacent to one another, to build such valuable skyscrapers. There’s also Legendary Skyscrapers up for grabs!

New York 1901 has all the ingredients needed for being a gateway-plus game. The cherry on the top is the gorgeous artwork from Vincent Dutrait. Who will construct the biggest and best real estate empire?

The year is 1901 (no it isn’t). Queen Victoria’s century-spanning reign has come to an end, Van Gogh has finally become a big name (ten years too late) and the words ‘Florida Man…’ appears for the first time in a headline as fires level Jacksonville. It’s a new century, a new president (twice) and New York is the new place to be new. What’s so new, though? Skyscrapers, my boy, skyscrapers!

The game New York 1901 takes place in the financial district of New York. Budding property tycoons are vying against each other to build the biggest and boldest skyscrapers. You are one of these tycoons, and you’ll be darned if anyone is going to out-build you or your name isn’t Oscar Twozzlepot the third! Building skyscrapers get you points, but there are extra points to be had if you can build the most on certain streets or build the most of a certain type – it’s a full-blown Lollapalooza!

Top Of The World, Ma…

Let's turn down the whole Greatest Showman vibe. New York 1901 is a 2-4 player area control/tile placing game where players take it in turns to either place workers and build or demolish to gain points. At the end of the game, there are also three randomly selected streets that will gain the player with the most buildings on that street extra points. An Architect’s Challenge will give points to the player who has the most buildings of a different type. If there is a draw, the player with the tallest skyscraper wins.

Each player begins with 4 workers and 18 skyscraper shapes. These range from 2 to 6 squares in size. Each player has the same shapes in the same category, so there’s no unfair advantage. They also have a two-square starter building according to their chosen tycoon that will be placed on the family crest in one of the five different colours on the board – yellow, green, blue, red or pink (pink isn’t used in the two-player game). These colours are scattered liberally across the board – there isn’t just one block of yellow or red for example, but they come in decent chunks/districts.

As well as getting their workers and skyscrapers, each player gets three special action cards and a token for marking one of the four special skyscrapers (if they get to build them). The rest of the set-up is shared by the players – the board in the middle, a row of four cards from a deck showing different coloured two and three square ‘lots’ (very similar looking in style to Ticket to Ride), the four special skyscrapers, the three streets and the Architect’s Challenge. Now, place your token on the point tracker and we’re ready to play!

This One’s So Tall, It’ll Need Hinges In the Top To Let The Moon Go By…

On a turn, a player can take one of two actions: place a worker and/or build or demolish and build. With the first action, a player can choose one of the lots on offer. For instance, a green two square and place one of their four workers on an appropriate space on the board. You don’t have to pick a space next to any you already have. The world is your mollusc! The card is taken by the player and a new card is drawn to replace it in the row.

You can then decide to build a skyscraper and get some points or hold that space and hope to add to it, allowing you to build bigger or wonkier skyscrapers for more points. You could even decide not to place a worker and just build on a space that you had reserved earlier. The choice is yours, but you only have four workers to place so it is a case of striking a balance between scoring or controlling. You also have to make sure your building is next to a park or a road (you don’t want your new residents wading through mud to get to their new building, do you?) but you can build across different coloured squares.

Points also allow you to unlock the skyscrapers you can place. At six points, you can build silver skyscrapers; at 18 points, you can build gold skyscrapers or one of the four special skyscrapers (big spaces, big points). The more points you get, the more options you have. The other action a player has is to demolish and build. Here, a player can decide to knock down buildings in a block so that another skyscraper can be built in its place – the land and points remain yours, you just lose the skyscrapers. If any lots remain unused, a worker must be placed in that lot to show it is yours. If you have no spare workers, you can’t demolish. Sorry.

The actions above can also be enhanced by the special cards each player has – these are one-off effects, so they could be used to game changing effect at the right time, but they also get you points at the end if unused. The cards are reset the lots, build twice and gain two lots. Reset the lots allows you to get rid of the four lots on offer for four new lots. Build twice allows a player to build two skyscrapers in their turn (as long as they have enough space). Gain two lots allow a player to gain two two-square lots from the row (you can only build one skyscraper though).

Play continues until one of two things happens – either the row can no longer be renewed (down to three cards) or one player only has four skyscrapers remaining. The remaining players get a final go and the extra points for roads and challenges are added. When it comes to a draw, the tallest skyscraper of the draw-ees wins – heights only appear on the special skyscrapers, so it’s handy to have one of those built… just in case.

The View From The Spectator Gallery…

There’s a lot to like about New York 1901 as it’s a game where a lot of games conjoin. The board, cards and lot selection makes it feel similar to Ticket to Ride. Though there are fewer bonuses to be had. The use of tetromino-like shapes make it similar to Barenpark. However, it allows for more player interaction with the shared board. Yes, I am going to build my skyscraper there! There is also more balance as all players start with the same shapes to play with. Though there is still that element of ‘racing for the big points’ with the special skyscrapers.

The special action cards and randomised, shared bonuses remind me of Sagrada. Yet in New York 1901, there is less asymmetry in start points than in this game. This could be seen as a good or bad thing. There are flaws with this game, though – the player pieces are a bit muddy looking. The blue/red/green combinations on the board will not be easy for anyone who is colour-blind. The character selection, though of ‘the time’ also looks a little dated. All white male/female characters. This may be seen as a quibble. But I think games should be more representative. This is regardless of the age they’re set in.

That aside, it’s a decent little under-rated game. It got lost between Ticket to Ride, Sagrada and Barenpark. It’s not as cut-throat as TTR. It's not as pretty as Sagrada. New York 1901 is also a bit more serious than Barenpark. If you’re tired of TTR or bored of Barenpark, though, give New York 1901 a spin – it might be right up your Wall Street…