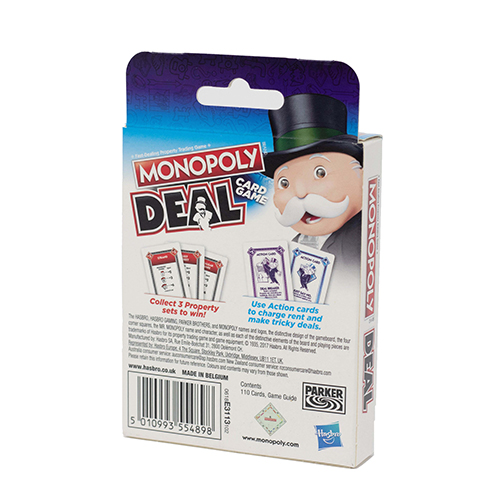 you could earn 429 victory points

you could earn 429 victory points

Don't you wish there was a game oriented around purchasing properties, acquiring whole sets of them, and further investing to increase the profit gained through their rent? Well, that doesn't exist. There is a similar game called Monopoly, but the rules change depending on who you play with! Monopoly Deal, on the other hand, is as close as you'll get to a structured version of Monopoly without all the hassle and drama it comes with.

It may be based on the staple of casual tabletop play, but it's not a direct family member. It's faster, more engaging, and won't have any rule discrepancies between games!

Monopoly Deal (designed by Katherine Chapman) consists of playing cards from your hand during your turn and aiming to acquire three full sets of properties. You have money cards, action cards and property cards. On your turn, you take two from the deck and play three (action cards may allow you to take more cards but the maximum number of actions you'll get is three). You play money to help protect your properties, and action cards against others to acquire money or properties; e.g. you play Debt Collector on another player so they must pay you £5 Million (steep economy), they can pay you that amount in either cash or properties, or a combination of the two.

You can't ask for more than someone has, but sadly for anyone on the receiving end of debt, no change is given either. Ever. Pay £10 million for a £1 million debt and you're going to make someone's day. Only cards played to the table are at risk, your hand is never taken from so it can be worth keeping hold of your best cards till the last second for a big power play!

This game is very fast-paced, and victory can be stolen at the last possible moment. You're always on your toes and can never be certain of a win. There is a lot of luck involved in terms of cards drawn, but I've won without ever claiming rent or playing horrible action cards, and I've seen people win without placing their own property cards. It can boil down to patience and timing, but waiting too long will definitely hinder you too! The game is very addictive and this quick filler title might end up taking more time than you anticipated. We found ourselves playing a good four times as someone was desperate for a win (just don't forget the game is meant to be a filler/warm-up!)

The cards fit with the classic Monopoly theme and the cash is reflective of that in the original too. The action cards are all very balanced, but I'd argue they can be very few and far between. A great addition to this is the wild cards that can be changed as an action, allowing more tactical players to steal the win by flipping a wild from a Red to a Yellow and completing a third set! The game is very easy to learn and doesn't require the same level of commitment as Monopoly does, however it can also be quite easy to lose focus from the game due to its super simple gameplay. Players will only need to interact when playing actions or saying they've won, so it's not overly social.

Is it better than the classic? Well... It depends on who you ask! Every board game player has an opinion on Monopoly, and it's one of the marmites of the gaming world; you either loath it, or you don't. I personally don't enjoy Monopoly, and it's for two reasons. It's not the mechanics, the gameplay, nor the concept that bothers me (I'm not even bothered that people have cashed in on hundreds of specifically themed versions!)

The first thing that gets me is the players. When you play Monopoly, the worst in you comes out. You can become a completely different human being! There is that old staple joke of 'Monopoly makes you flip the table,' and sadly it can be true! It's beyond what happens in any other board game, people become quite vindictive, and I think that links heavily to the second reason; the continual variation of rules... Money on free parking? Not auctioning every property landed on? Settling a £1500 debt by giving away Pall Mall? It's crazy. And it's that looseness that makes people believe the game is unfair and become nasty...

But anyway! That's not the point of this review! Monopoly Deal is a diluted Monopoly, and that's a stretch even then. I'd argue it's a completely different game with a Monopoly theme, and that makes it better. A lot better. It plays quickly and efficiently. The rules are crystal clear, there is little margin for error, and you can see how close someone is to winning usually by the state of the table - but know they're not guaranteed an easy win!

As mentioned, the cards are themed directly around the original and match it's aesthetic perfectly. The quality of the cards is decent enough to last a good long while. And because there are only cards in this game, it's unlikely you'll have a long set-up/set down time. You just deal five to each player, offer them the quick prompt sheet, and start monopolising a small empire!

Monopoly Deal is endlessly replayable, but don't expect humongous differences between the play within games. The beauty of this is how quickly it is played. It allows for a lot of development in terms of tactics and understanding within a short period. If you enjoy your first game you will want to play again, and again... but remember! It's a filler!

You've got to be engaged within this game to know your next play. The cards in your hands don't change on others' turns, so it's worth spending time to understand them and make a plan of action of whose day to ruin. And whose day you'll ruin is determined by what cards they currently own! Lose track of what's going on and you'll be fumbling around, and that can really throw a spanner in the works of the game's flow. You might even miss your own victory!

The rules do clearly state that, should you not notice you've won during your turn you must wait until your next turn to claim victory. As much as it's common sense to know what a victory looks like, missing this will not bode well with others as you will be their number one target! The game's only player interaction is when you're either explaining who you've targeted for your evil deeds or claiming victory!

I really enjoy playing Monopoly Deal, and it's a great one to get to the table when we have company who aren't massive gamers. Its fast, fun playstyle sits well with most and encourages people to have a go! I haven't yet met anyone unwilling to have a go once they're told it only take about 10 minutes, and after they've finished their fourth game of this filler they realise how caught up in the fun they were!

Calling it Monopoly is deceptive as it doesn't belong under that umbrella category of frustration and inconsistency! I'd highly recommend picking it up for long journeys, whilst out and about, or just for anyone looking for a light but awesome game! So pass go, cash in, and start breaking deals!

You can check out the rest of our vast collection of Monopoly games here.

Editors note: This blog was originally published on May 8th, 2019. Updated on November 2nd, 2021 to improve the information available.