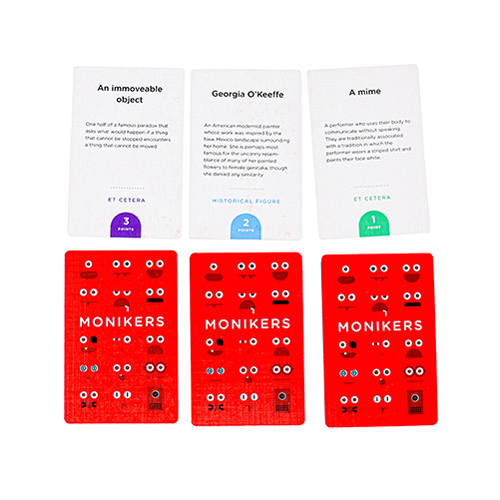 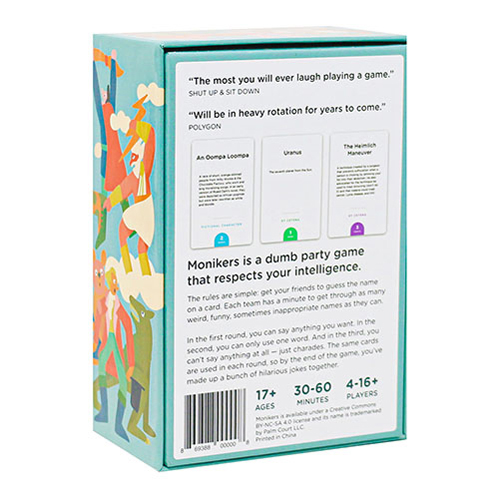 Monikers is a party game based on the public domain game Celebrity, where players take turns attempting to get their teammates to guess names by describing or imitating well-known people. In the first round, clue givers can say anything they want, except for the name itself. For the second round, clue givers can only say one word. And in the final round, clue givers can’t say anyt…
Read More
Tags Best Sellers, Big Groups, Golden Pear SKU ZVR-6091 Availability 3+ in stock
Share
Share this
81%

Monikers is a party game based on the public domain game Celebrity, where players take turns attempting to get their teammates to guess names by describing or imitating well-known people.

Based on the public domain game known as Celebrities.

Monikers may be the best party game ever made - I have yet to see a swing and a miss when it comes out. I have always seen the players reduced to joyful hysterics in every game we have played and I love it every time it hits the table

So What is Monikers?

It is just a big box of cards. A beautiful box and 440 lovely, linen-finish cards, but just a box of cards. Each card has 'a name' on it (more of that later), a description (sometimes helpful), a category (irrelevant) and a number of points for guessing it correctly. Taking c.10 cards each, you will pick c.5 that you think your group will 'get' to form a common deck for both teams to share. You want about 40 cards in all so you adjust these draw numbers to get the right result. Then you are ready to go.

Each team will take it in turns to guess the names from clues provided by a clue-giver. Each turn is a minute and you will play alternating turns until you have got through all the cards. That completes a round and the game is played over three rounds, each with the same common deck but with the following different rules:

Round 1 - you can describe the name on the card freely as long as you don't use any of the words in the name.

Round 3 - you can't say anything

After each round, you total the points for the cards guessed correctly; at the end of the third round the team with the highest grand total wins…. as if you will really care.

Is That Supposed to Sound Good? Really?

That's it. Underwhemed? I was when I read the rules - sounded a bit rubbish really. How wrong I was. Far from rubbish - actually superb. Sidesplittingly superb.

A long time ago I went to a comedy improvisation workshop for a day. A friend took me and I learnt quite a bit about comedy in a very short space of time. He subsequently became a successful member of Showstoppers - I didn't. Still, turns out one of the core concepts of comedy is re-incorporation: a gag is made and then aspects of it are woven through the subsequent routine or dialogue. Each time they pop back up they add to the comedy. Watch any good stand up and you will see it happening time and again, almost regardless of the type of stand up performer.

In Monikers, it's not quite that but it's very close. I'll explain in a minute.

Round 1 is the least funny but still a giggle. It gets its humour from the mad diversity of the 'names': from Baby Hitler, to Christopher Walken, the ego to Skeletor, farting in an elevator to jazz flute. Laughs come from disbelief that this name could possibly be what is printed on the card. After many plays, laughs also come from hearing how players describe a name that you have encountered before.

Round 2 is better. You have heard all of the names on the cards - you won't have learnt them but you'll be familiar. So this then becomes the source of the re-incorporation humour: the crazy names summarised in a single word: Nazi, dancing, me, He-Man, flatulent, Burgundy.

Round 3 is better still. It's charades and yet so much more because you 'know' all the cards. You are possibly re-incorporating the single words in mime; sometimes, instead, distilling the essence of the name in gesture. Just try visualising my exemplar list in your mind's eye and see if it doesn't make you smile.

Time after time this becomes a sure-fire recipe for tears rolling down the players' faces. And if you want even more there are some optional bonus rounds: a round of mime under a sheet; a round of mime from behind the sofa using only your hands… or only your head. Simply fabulous - and the more of the bonus rounds you play the funnier it gets. Not only are the constraints of the rules hilarious, but the re-incorporation adds to the humour.

Not Much to Quibble About

Any gripes? Well maybe one or two, but they are pretty minor. It is just a box of cards - you could DIY and to be fair this is under a creative commons licence. Then again, I am not sure I could quickly dream up such a bizarre and inherently amusing selection of names. It is an American publication - so I don't have quite the same cultural capital and don't, therefore, know all the names. But I know the vast majority and I have just filtered out a handful that stay out of the card pool. It's a great family game - but then a good chunk of the content isn't family friendly and it is given, quite rightly, a 17+ age band. Again, easy to rectify with some quick triage before you play and I have had young and old in hysterics playing this.

Monikers is quick, simple, hilarious genius. It is a sure-fire box of laughs that will come out again, and again, and again. It's a 30-minute hit that plays with a party of any size and can be made to work with any audience. Just go out and get it!