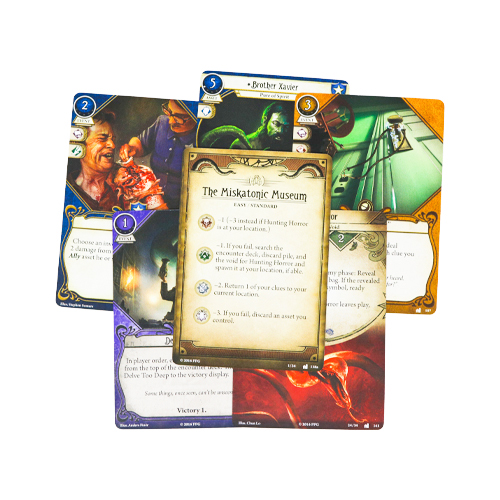 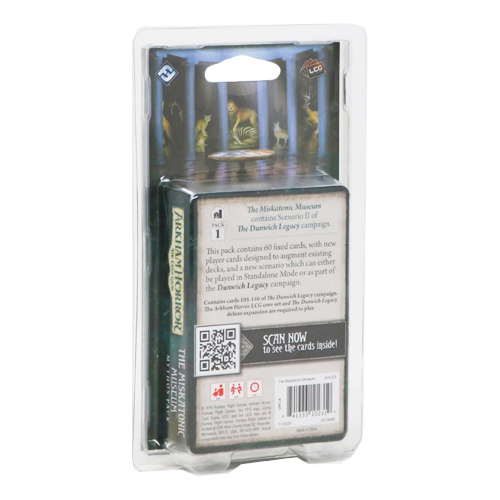 Arkham Horror: The Card Game is a cooperative game for up to two players (or four, with two core sets). Set within the fictional world of H P Lovecraft’s Cthulhu Mythos, players will each take on the role of an investigator. Each investigator is unique, with their own set of skills, strengths and weaknesses, represented a deck of cards. The game is played by completing a numbe…
Read More
Category Board Games Tags Arkham Horror, Arkham Horror LCG, Best Sellers, Fantasy Flight Games, Living Card Game SKU ZBG-FFGAHC03 Availability 5+ in stock
Share
Share this

Arkham Horror is a fantastic game of investigating the unknown and defeating the horrors that lie beyond the veil of the world we can see. Each cycle in the game consists of a big box expansion and then six mythos packs that continue the story within to it's epic conclusion.

The Miskatonic Museum pack we are looking at here is the first of the Dunwich legacy cycle, that starts with the Dunwich Big Box expansion. I'll make sure these reviews are spoiler free as I'll mostly be concentrating on the awesome player cards that each pack brings to the game.

After the events of the Dunwich big box expansion you find yourself heading towards the local museum where you have been told a strange book can be acquired to help you with your efforts.

Unfortunately it's late at night so getting in is going to prove problematic but I am sure you'll be able to pick, or break, your way in. Once inside, well you'll just have to step into the darkness to find out!

So let's have a look at the new toys that each mythos pack is going to give you. There is a nice selection of cards in each one and you will find two copies of each of them for deck building purposes. Each pack contains a couple of cards for the different classes as well as a neutral card or two.

Let's start with this incredible card. Okay, it needs a point of experience to buy and it's three resources to play but it's not unique, meaning you can have two of these out at a time. The ability to just move to a location without taking an action is great, and these cards that allow for 'Action Compression' almost always come up high in any deck builder's list of cards to include.

With it being a low experience card as well it should find it's way into investigators outside of Seeker.

Let's move onto some mystic action and Delve too Deep. This card. This card is. I mean look at it. A fantastic piece of design, giving you some experience for the risk of...well who knows what. Maybe you'll get away with it, maybe you will have an arm torn off, it could go either way.

This is a great card for early on in the campaign and a good one to replace with more useful things as you near the end.

Adaptable is an interesting card that I think has been overlooked, including by myself. It doesn't seem that great for a first run through a campaign as you are not sure what is coming next, but it's ideal for the subsequent stories, providing a great way to adapt ever so slightly for the upcoming horrors.

As the card pool grows I think this card will become even more useful.

Finally let's look at one of the survivor cards out of this set. The Fire Extinguisher is not the best, but I do love the flavour of it: yeah you can bash someone over the head with it, or use it and escape into the night. Really nice piece of design that.

After the blockbuster that was the Dunwich core set I do admit that the scenario in this pack left me feeling a little cold. It's very dependent on things coming out in the right way, but when it does, it really shines.

There are some excellent investigator cards in here as well, so even if you don't like the story very much, you'll find plenty to play with here.