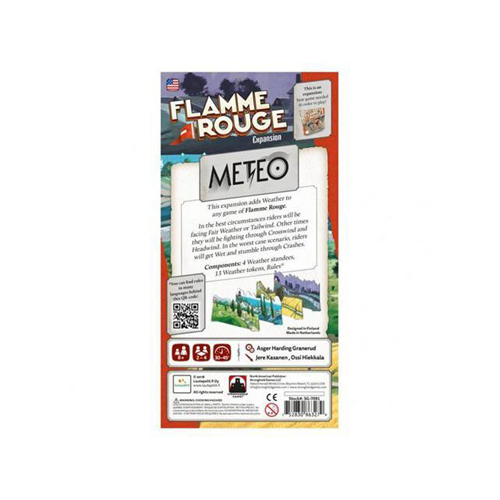 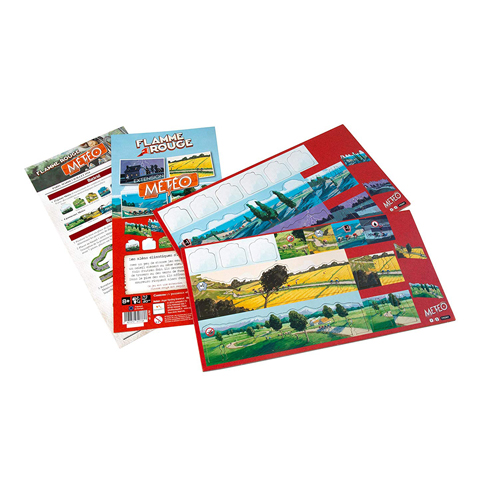 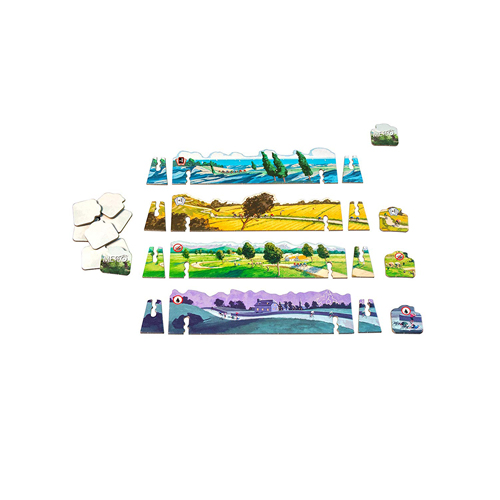 We are taking Pre-Orders for the next print run - More information to follow soon.

Flamme Rouge is an excellent bicycle racing game of hand management and efficiency as each player battles to use their two cyclists in harmony. To succeed, riding in packs is essential, as is slip streaming. Just riding as fast as you can will only bring misery, and some rubbish low stamina cards that really mess up your deck.

The base game came with loads of content and ways to build tracks to race on. The Metro Expansion looks to add more modifying elements in weather effects. In the base game hills could affect your card play, negating somewhat lower cards, if timed properly, and now we have mother nature to content with too!

This is a small expansion that contains four long weather effect stands, and 13 weather tokens. Once you have set-up your course, you shuffle the weather tokens and deal then face-up to each straight on the course, excluding the start and finish tiles. Any that show weather effects have the weather stand placed at the side of that straight, and then all the tokens are removed. The weather stands on effect the tile that they are next too.

The weather stands show the effects that they apply to the straight that they are next too. As you may imagine, good weather such as tail winds will give positive effects where as others will make the going tougher. The effects are:

• Tail wind allows riders that start on the tile to draw an extra card.
• Cross wind prevents riders giving or receiving slip stream bonuses.
• Head wind means riders draw one less card and wet terrain forces riders who lose movement due to being blocked to resolve a crash.
• Crashing means the rider is laid on it’s side and no longer gives slip stream bonuses, in their next turn they stand up and apply -2 to the next card they play.

So, while the expansion is small on physical content, the new additions are easy to add and give you much more to think about when planning your moves. Trying to force a rider to crash, or take advantage of extra cards are very real options and this is a nice expansion to add to the base game.

Flamme Rouge is one of my favourite racing games of all time and the Peloton expansion is an absolute must have addition. The Meteo expansion adds weather effects to the game, but is it an essential purchase?

Okay, first things first, this is a very small expansion which is reflected in the price. It does not come with a box instead it is wrapped in plastic. What you are receiving for your money is a new set of rules, 4 weather standees and 13 weather tiles.

Set Up And Play

This expansion can be included with any player count of Flamme Rouge with or without the Peloton expansion.

During set up of the game you shuffle all of the weather tiles and deal one to each straight except the start and finish straights. Any weather tile that shows one of the four possible kinds of weather is replaced by the equivalent standee that goes next to that straight (this improves the table presence of the game without hindering the view of the track). Then all of the other weather tiles are removed.

As the placement of the tiles is randomised you can go several races with very little to no weather or have a race with all four weather effects hitting your riders. I would recommend having a race deliberately with all four kinds of weather so you can get used to the effects.

The weather effects are fairly simple to grasp and the symbology on the tiles and standees are easy to read. The effects occur when your rider is on the straights associated with the standees.

Crosswind stops the rider from receiving or giving any slipstream.

Tailwind allows the rider to draw 5 energy cards rather than 4.

Headwind restricts the rider to draw 3 energy cards rather than 4.

The Wet causes riders to crash if they have been restricted in movement due to another rider ahead of them.

Easily the best part of this mini expansion is the crashes that occur due to the Wet weather.

When a rider crashes you lay them on their side in the space they finished their movement. Then no slipstream can occur to or because of a crashed rider. If all lanes are blocked by crashed riders then no other riders can pass through and would also crash if their movement was restricted and it is still within a Wet weather straight.

During the next round, any rider that has crashed will have two subtracted from the energy card played and they will stand up and move. However, if they only play an energy card with a value of 2 they would just stand up and stay where they are.

The penalty is applied after Descents and Supply Zones adjust the value of the energy card so you can use that to your advantage. The rule does not modify the cap of 5 for Ascents.

Is this expansion worth the money? The simple answer is yes. I would suggest that anyone playing the game regularly and who has enjoyed the Peloton expansion should buy this but be aware that there isn't very much content added. It would have been nice to have some new tiles or maybe another colour for the racers. However, the crashes really add a lot to the game so I will be including the weather every time I play Flamme Rouge.