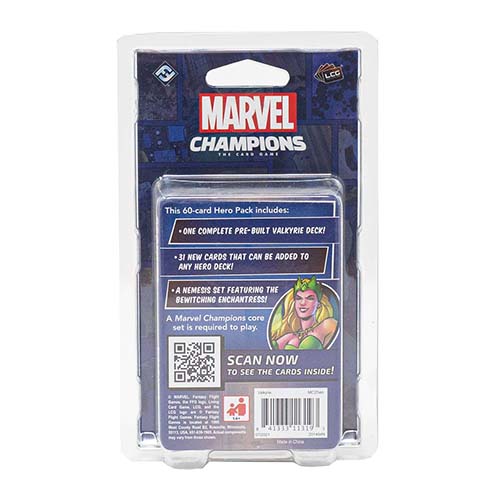 Appointed as leader of the legendary Valkyrior by Odin, Brunnhilde defied the All-Father’s wishes by leaving Asgard to join the Avengers. Since that day, she has dedicated herself to the defense of Midgard as the valiant Valkyrie! As a member of the mighty Valkyrior, Valkyrie charges into battle in this expansion pack, which introduces her as a brand-new playable hero along with h…
Read More
Category Trading Card Games Tags 9-11 Years, Fantasy Flight Games, Living Card Game, Marvel, Marvel Champions LCG SKU ZBG-FFGMC25 Availability 3+ in stock
Share
Share this
79%

Appointed as leader of the legendary Valkyrior by Odin, Brunnhilde defied the All-Fathers wishes by leaving Asgard to join the Avengers. Since that day, she has dedicated herself to the defense of Midgard as the valiant Valkyrie! As a member of the mighty Valkyrior, Valkyrie charges into battle in this expansion pack, which introduces her as a brand-new playable hero along with her sixteen signature cards. With a pre-built Aggression deck ready to go, you can take a stab at Valkyries dueling-focused gameplay from the moment you open the box. With strong attacks and plenty of stat boosts, this is one Asgardian that you wont want to mess with! Not a standalone product. The Marvel Champions: The Card Game Core Set is required to play.

Marvel Champions is a one to four player superhero game where players take on the role of one of five Marvel heroes to battle it out against one of three villains. Play as Captain Marvel, Spiderman, She Hulk, Black Panther or Iron Man and face off against Rhino, Klaw or Ultron.

During a player's turn, they will play cards. (Paying for the cost by discarding other cards from their hand). Then, activate cards and perform a number of actions all in an attempt to defeat the "big bad" and to thwart his schemes. Players can also switch from alter ego to hero form once per turn. And activate their character's special ability as well the basic recovery, attack or defend actions. Once a player has performed all of their actions it passes to the next player. They repeat the process until all players have performed their actions.

Players will need to manage the number of threat tokens that are placed on a scheme if a certain quantity is reached the scheme advances to the next stage and eventually the Villain will win by completing his scheme. In addition to the threat/schemes, players will also have to take out minions and deal damage to the Villain to reduce his health to zero and win the game.

Marvel Champions is a living card game (LCG) and as such the publisher Fantasy Flight Games (FFG) is supporting the game with new Hero & Villain packs to further expand the game, the combinations and replayability. Check out a full review & final thoughts of the core game here.

Chooser Of The Slain

Marvel Champions has another hero pack. Brunnhilde joins the fight, riding her winged steed, Aragorn, and protecting Asgard. Valkyrie (aka Brunnhilde) was selected by Odin himself to lead his personal unit of shield maidens (the Valkyrior). She is known throughout Asgard for her prowess in battle and wields her enchanted sword Dragonfang.

The Valkyrie hero pack comes with a pre-built aggression deck and 16 signature Hero cards. Valkyrie's is a one thwart, two attacks and one defence Hero that comes with the Death Glow upgrade featuring heavily in her playstyle. Many of her signature Hero cards play into this upgrade card. The death glow upgrade can be attached to an enemy. When an enemy with Death Glow is defeated, the upgrade is set aside and Valkyrie can be readied. Combine this with her aggression aspect and she will be defeating minions and readying often.

Hero cards like Valkyrie's Spear and her enchanted sword Dragonfang offer additional defense and attack points. This is increased if the enemy being defended against or attacking has the Death Glow attached. As with a lot of Marvel Champions Hero packs they have their unique selling point and for Valkyrie this is most definitely her Death Glow upgradeability.

Playing further into the Death Glow upgrade, the Shieldmaiden Hero interrupt event card is very fun to play. Declaring Valkyrie as a defender of an enemy attack with Death Glow attached gives her +2 defence and she does not need to be exhausted.

The pack also comes with some new cards to add to your aggression aspects and basic cards for further deckbuilding options. Aggression cards like "Smash the Problem" and "Quick Strike" as well as basic cards such as "Godlike Stamina" and "The Bifrost".

The Valkyrie Hero pack does nothing overly exciting but what it does offer is a solid Hero to add to your collection. The Death Glow upgrade attachment does add some nice card play and gameplay moments when it comes together.