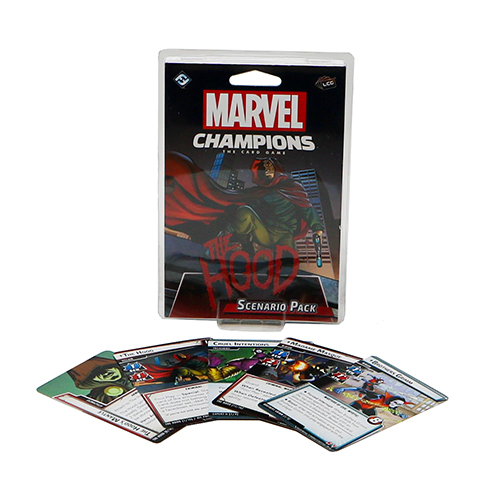 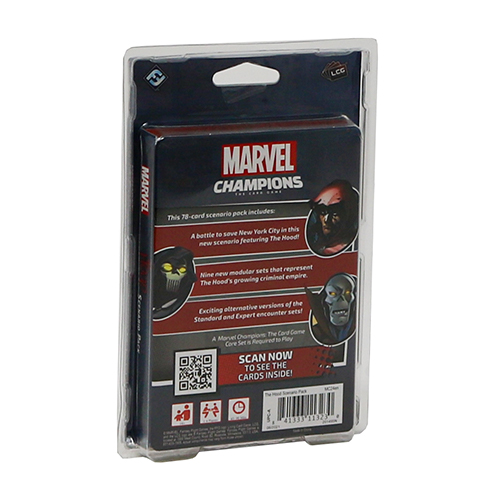 Ever since he witnessed a battle between Electro and Daredevil as a child, the life of a supervillain was enticing to Parker Robbins. Later, while stealing money to pay for his mothers medical care, a chance encounter with a demon left Robbins with a pair of boots that let him walk on air and an equally-mystical red cloak. Now, as the Hood, Robbins and his budding criminal empire …
Read More
Category Board Games Tags Marvel, Marvel Champions LCG, New Releases SKU ZBG-FFGMC24 Availability 3+ in stock
Share
Share this
87%

Ever since he witnessed a battle between Electro and Daredevil as a child, the life of a supervillain was enticing to Parker Robbins. Later, while stealing money to pay for his mothers medical care, a chance encounter with a demon left Robbins with a pair of boots that let him walk on air and an equally-mystical red cloak. Now, as the Hood, Robbins and his budding criminal empire are swiftly becoming a formidable threat to the people of New York City.
This 78-card scenario pack introduces a new scenario to Marvel Champions showcasing the Hood and his notorious organization of supervillains. Also included are a whopping nine modular encounter sets that can be mixed in with any scenarioincluding the Hoodsto add more customization options to your Marvel Champions experience. Are you prepared to take down a dangerous criminal empire?
Player Count: 1-4
Time: 45-90 Minutes
Age: 14+

Marvel Champions is a one to four player superhero game where players take on the role of one of five Marvel heroes to battle it out against one of three villains. Play as Captain Marvel, Spiderman, She Hulk, Black Panther or Iron Man and face off against Rhino, Klaw or Ultron.

During a player's turn, they will play cards. (Paying for the cost by discarding other cards from their hand). Then, activate cards and perform a number of actions all in an attempt to defeat the "big bad" and thwart his schemes.

Players can also switch from alter ego to hero form once per turn. And activate their character's special ability as well the basic recovery, attack or defend actions. Once a player has performed all of their actions it passes to the next player. They repeat the process until all players have performed their actions.

Players will need to manage the number of threat tokens that are placed on a scheme if a certain quantity is reached the scheme advances to the next stage and eventually the Villain will win by completing his scheme. In addition to the threat/schemes, players will also have to take out minions and deal damage to the Villain to reduce his health to zero and win the game.

Marvel Champions is a living card game (LCG) and as such the publisher Fantasy Flight Games (FFG) are supporting the game with new Hero & Villain packs to further expand the game, the combinations and replayability. Check out a full review & final thoughts of the core game here.

Fantasy Flight have released a new scenario pack - The Hood. Chance encounter or fate? Who knows, but on one eventful night, Parker Robbins meets a demon who left Parker with a pair of boots that let him walk on air and a mystical red cape. Parker becomes The Hood and his criminal empire quickly becomes a menace to the good people of New York.

Not only does this scenario pack contain everything needed for The Hood scenario but it contains an immense number of new encounters, nine to be exact. This is (I think) the largest number of new modular encounter sets included in a scenario pack to date and adds a ton of replayability to not only this pack but the game overall. In addition, Standard II and Expert II cards are included to mix it up even further.

The Hood is such a cool scenario. As part of set-up you choose seven modular encounter sets. One of these is randomly selected (or you could select) and shuffled into the encounter deck.

A lot of the main scheme triggers include adding new encounter sets from those set aside during set-up. The Hood also has a "foul play" ability which discards from the encounter deck and may result in you receiving additional encounter cards. Some of the modular encounter sets have some quite tough minion attachments and treachery cards.

Obviously depending on which encounter set ends up getting added to The Hoods encounter deck will determine how well you fare against this villain. After set up you will have six facedown encounter sets and when I need to add one I tend to simply roll a die and that determines which one I add. Pick your method for randomising, this is just mine.

I really like this encounter set. It has a ton of variability that will certainly keep you on your toes. You can't really build a minion specific hero deck or a thwarting specific deck as you don't really know what you are going to be up against. This adds an additional challenge which I enjoy. On top of that if you want to make the game harder you have the increased difficulty of the Standard II and Expert II encounter cards.