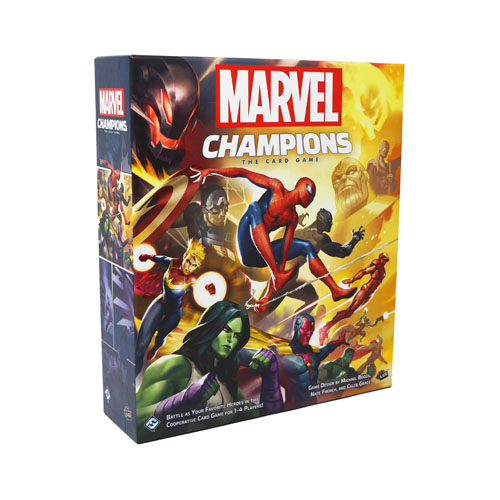 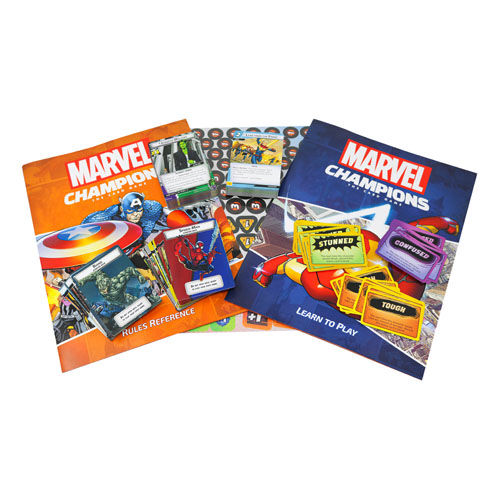 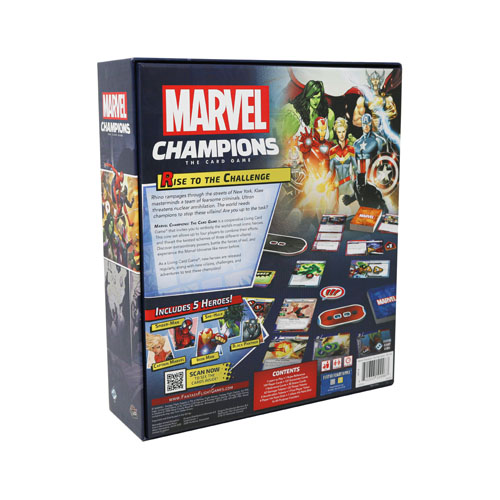 you could earn 3799 victory points

you could earn 3799 victory points

Rhino rampages through the streets of New York, Klaw peddles illegal weapons to the worlds most dangerous criminals, Ultron threatens global annihilation. The world needs champions to stop these villains, are you up to the task?

Harness the power of a hero in Marvel Champions: The Card Game Core Set, a cooperative Living Card Game of super heroics for 1-4 players!

Marvel Champions: The Card Game sees players taking on the roles of the iconic heroes of the Marvel universe as they try to stop infamous villains from enacting their devious schemes. With over 350 cards, 100 tokens, five hit point trackers, and more, The Marvel Champions: The Card Game Core Set gives you everything you need to start your journey in the Marvel universe. Choose to play as Iron Man, Captain Marvel, Spider-Man, Black Panther, and She-Hulk! Combine your powers to take down the rampaging Rhino, the devious Klaw, or the utterly terrifying Ultron!

The game brings the epic battles of the Marvel Universe to your tabletop. Each game sees the players selecting both their hero, and a scenario consisting of a villain and a scheme. Each villain and scheme has multiple forms, shifting the momentum and rules of the fight as the villain continues to enact their plans and the heroes race to defeat them with a wide array of powers and tools. Let the scheme advance enough times, and the heroes will lose the game. However, if you can fight through the villains various forms and thwart them with a combination of teamwork, skill, and luck, your team of heroes will emerge as champions!

But it wont be that easy, every villain has their own encounter deck full of minions and tactics. Can you withstand Rhinos assault when he finds a new ally in the dreaded Shocker? Will you be to thwart Klaw when he unleashes a devastating sonic boom? Can you defeat an army of Ultron Drones? These challenges and more await you in each scenario Do you have what it takes to overcome impossible odds and become the champion the world needs?

Marvel Champions is the latest living card game (LCG) from Fantasy Flight Games (FFG). FFG are known for their LCGs so how does Marvel Champions shape up against Arkham Horror and The Lord of the Rings?

Marvel Champions is a one to four player super hero game where players take on the role of one of five Marvel heroes to battle it out against one of three villains. Play as Captain Marvel, Spiderman, She Hulk, Black Panther or Iron Man and face off against Rhino, Klaw or Ultron.

During a players turn they will play cards. (paying for the cost by discarding other cards from their hand). Then, activate cards and perform a number of actions all in attempt to defeat the “big bad” and to thwart his schemes. Players can also switch from alter ego to hero form once per turn. And activate their characters special ability as well the basic recovery. Once a player has performed all of their actions it passes to the next player. They repeat the process until all players have performed their actions.

As well as hero specific cards players will construct their deck with “basic” cards and choose one of the aspects their character will play; Leadership, Protection, Aggression and Justice. All the heroes and aspects are interchangeable.

I am not a seasoned LCG player. I have played the core Arkham Horror core box and that is about it. So I will not be comparing the gameplay to Arkham Horror or The Lord of the Rings LCGs (much) and I am coming this from a “novice” point of view when it comes to LCGs.

Marvel Champions has a lot of variability and replay-ability straight out of the box. There are five heroes, four aspects and three villains so there is a lot combinations and permutations to experiment with. In addition to this there are various side schemes and nemesis that can be added in to the encounter deck to further increase replay-ability. Each villain also has an additional “expert” card that can be played with to increase the difficulty.

As with all LCGs there are going to be a lot of extra expansions and card packs over the coming months/years, FFG have the whole of the Marvel Cinematic Universe to go at so there is a lot of potential. The replay-ability and the scope is almost endless and I am very much looking forward to seeing what is coming next.

But how does it far as a game? Well, I played this 14 times in the first 10 days. Often playing single or double handed solo games. It is fantastic. I am struggling to think of what other game might beat this as game of the year for me. It is quick to play (especially solo) and feels streamlined compared to Arkham Horror, which I have played minimally.

The game feels very thematic with the obligations on point with the character. For example, Spiderman’s obligation is his eviction notice which ties in with the films and his character.

The use of the hero and alter-ego form is a very interesting mechanism. When in hero form the villain/minion will attack your hero and deal you damage. However, when in alter-ego form the villain/minions will scheme and add threat to the scheme. You can make some interesting and tactical choices of when to switch from one form to the other. The hand limit also changes depending on which form you are in. For example, Tony Stark’s hand limit is six but when in Iron Man form it will depend on the number of tech upgrades. Again this feels very thematic.

There are a lot of keywords and some edge case rules which might confuse players at first or when certain combinations of cards come up, but I think this is the nature of LCGs in general. In the instances where I have been unsure I have just go with what makes sense. After a few plays though the game feels smooth and streamlined.

Each of the heroes feels and plays differently and comes with their own play style. Add in to that the different aspects, villains and side scheme and you have a different feeling game each time.

Marvel Champions, for me, is the LCG that I didn’t know I wanted. I love the universe, enjoy the solo game as well as playing with others. Personally, I like the cooperative nature of it and how thematic it feels. I can see this one growing. Not just in content, but in my love for the game over the coming months/years. Just need to defeat Klaw and then Ultron and I will be ready for more villains.