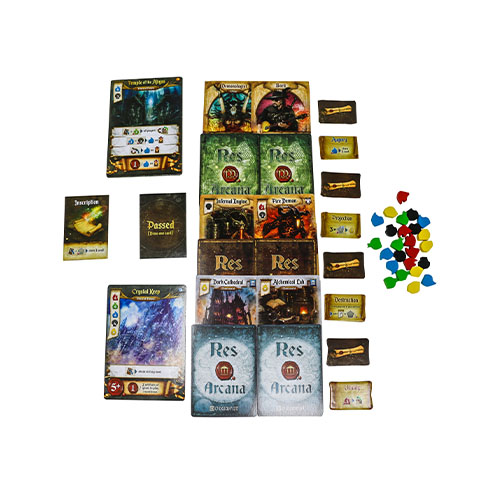 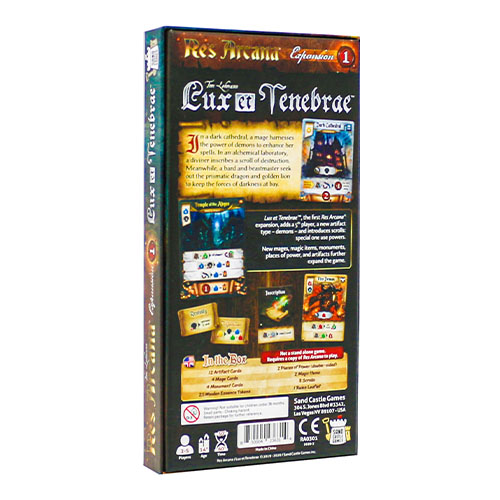 you could earn 1595 victory points

you could earn 1595 victory points

In a dark cathedral, a mage harnesses the power of demons to enhance her spells. In an alchemical laboratory, a diviner inscribes a scroll of destruction. Meanwhile, a bard and beastmaster seek out the prismatic dragon and golden lion to keep these forces of darkness at bay.

I have some pretty strong maxims about what makes for a good expansion. The best should either be a massive reengineering of the base game which keeps true to its spirit (Cyclades Titans) or they should be relatively inexpensive tweaks adding new content and mechanical variation to provide a few extra wrinkles (Bloody Inn, Carnies). Lux et Tenebrae does the latter and it does it really well.

A word about Res Arcana. If you are reading this then likely you have it already. If not then for heaven’s sake just go and buy it. It is a beautifully lean deck and engine builder from the great Tom Lehmann, of Race to the Galaxy fame. The two titles share some common DNA but this is tighter and more elegant to my mind. Working with a tiny, drafted deck of just 8 cards you will build the best engine you can muster to produce essences, claim monuments and places of power and try to beat your opposition to 10 VP.

At its simplest Lux et Tenebrae adds a little more to every aspect of the base game: artefacts, mages, monuments, magic items and places of power. But it’s more than the sum of its parts, as within this we see the addition of new mechanical flavour in the form of demons and scrolls.

Demons are a new category of artefact, akin to Creatures and Dragons – there’s no drastic difference; a tendency to be linked more to elan (fire) and death essences, perhaps. However, they are also woven into the other new elements of the expansion. There is a demonology mage; two demon-related places of power and demon-related monuments. All in all, just over half of the content in total is ‘demony’ and this alternative, coherent game element provides welcome variety.

Scrolls are claimed by taking the new Inscription magic item. They give you a storable one-shot power, similar to the magic item powers but slightly weaker. When I first read about them it looked a bit ‘meh', though in reality because you can hang onto them and choose when you play them they allow you to some tactical variety which really adds to the way the game plays. Essentially you tend to save up and use one or two scrolls in a turn to pull off some fancy and satisfying combo.

Lux et Tenebrae also expands the player count to 5 - a welcome option. While much of the game can be quite a solitaire affair if players want it that way, the turn time is pretty brisk so five players works just fine.

Other welcome rules tweak is that Lux et Tenebrae introduces rules for a scaled setup. This is based on player count, which affects the number of monuments and places of power used. The intent is to make the two-player game tighter and the four-player game looser, and it does just that very well.

The final welcome detail is that Lux et Tenebrae fits in the base box, though the expansion cards are clearly marked and quick to strip out, which you might want to do if playing with new players.

All in all, this is a very satisfying and successful small expansion. It provides welcome variety and carefully designed additions and tweaks at a very low cost. It improves the play experience and extends replayability. If you love Res Arcana, you don’t have to buy this... but why wouldn’t you? I definitely recommend it.