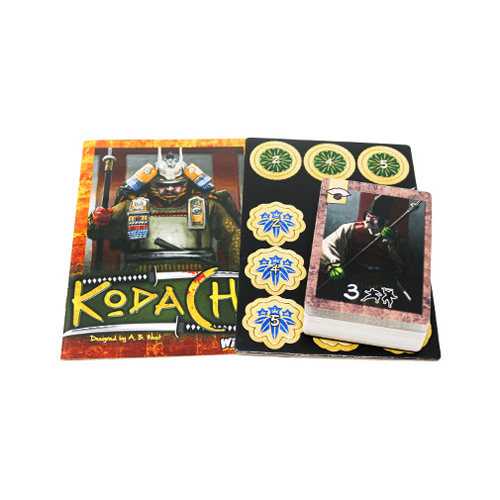 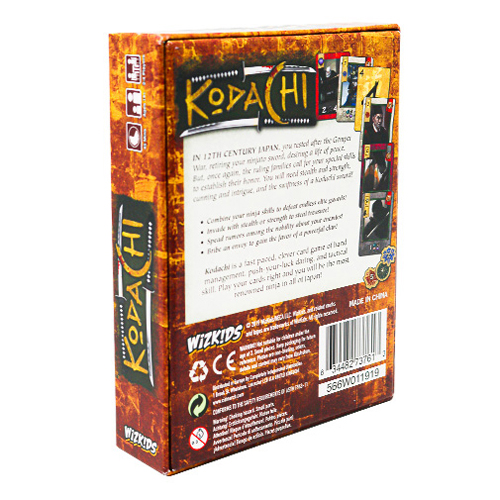 In 12th century Japan, you rested after the Gempei War, retiring your ninjato sword, desiring a life of peace. But, once again, the ruling families call for your special skills to establish their honor. You will need stealth and strength, cunning and intrigue, and the swiftness of a Kodachi sword! In Kodachi, you seek to steal treasures by facing guards in one of two ways  with st…
Read More
Category Board Games Tag WizKids SKU ZBG-WZK73761 Availability 3+ in stock
Share
Share this
85%

In 12th century Japan, you rested after the Gempei War, retiring your ninjato sword, desiring a life of peace. But, once again, the ruling families call for your special skills to establish their honor. You will need stealth and strength, cunning and intrigue, and the swiftness of a Kodachi sword!

Clan tokens are gained by playing envoys and when the last clan token is taken, the player with the highest score wins!

Squeezing a Quart into a Pint Pot

Kodachi is the card game adaptation of the board game Ninjato, both of which are the work of designer Adam West (not the one who played Batman). In theory, playing a card game remake of a favourite board game sounds like a very attractive proposition. Being able to squeeze all that board gaming goodness into a small box that is easy to set-up and quick to play sounds like a dream come true. Sadly, life is rarely that simple, which means that card game adaptations often suffer from a couple of problems. If the designer tries to be too faithful to the original, then the game can turn out overly complicated and fiddly. Conversely, oversimplify the game and you end up with a soulless watered-down experience that often resembles the original in name alone. Kodachi and Ninjato are set in 12th century Japan and feature warring clans and sneaky treasure-stealing ninjas. Kodachi is set several years after the events of Ninjato. The ill-gotten treasures acquired in the first game have allowed our ninja to hang up his sword and enjoy a peaceful life of retirement. However, there is a limit to how much daytime TV any self-respecting ninja can endure. With reports of the clan war flaring up again, the allure of treasure and notoriety is just too much for our light-fingered warrior to ignore.

Ninjato is a worker-placement game with a side-order of push your luck, topped off with a set collection garnish. Kodachi dispenses with the worker placement aspect, choosing instead to draw the other two elements into sharp focus. At the beginning of each turn, a player flips a house card and also reveals a guard card. It is the guard’s job to ensure that they protect both house cards and treasure. Your standard guard will have a rating of one to five. A low rating doesn’t mean that the guard is rubbish, just that he is more suited to using his wits rather than his brawn. The player must consider the guard’s rating and then study the cards in their hand. They then have a decision to make; do they engage the guard using their strength or their stealth? To win an encounter using strength, the card that you play must have a higher rating than the guards. On the other hand, to win using stealth, the card must be lower. That sounds simple enough, but now the player has another big decision to make. Do they take the spoils and run, or press-on to face the next guard? The more battles you win, the more rewards you will earn, but the fewer cards will remain in your hand. If you are lucky enough to have some grey skill cards, you can use them to modify combat values, draw extra cards or switch your approach. The latter can be especially useful because, usually, when you enter a house, you cannot switch styles. Say that the first guard has a value of two; choosing a style based on strength means you only need to play a card with a value three or above to win.  However, if the next guard has a rating of five, you still need to defeat him using strength. Therefore, since standard cards only range from one through to five, you may well end up as sushi.

The trick is knowing when to quit. The more guards that you defeat, the more rewards you potentially earn. However, it only takes one defeat to bring everything crashing down. You will get nothing and, to make matters worse, your opponents will have the opportunity to pick over the spoils of your endeavours. Each defeated guard will relinquish one of four different types of treasure. These can then be used to purchase the revealed house cards. In addition to the grey skill cards, house cards provide a range of different coloured cards for you to purchase. The white envoy cards help you earn influence in one of the three clans, earning bonus victory points. The purple rumour cards reward points for collecting sets of cards of a particular colour. Building an effective deck of cards is the key to winning Kodachi, but this is just one of a constant stream of painstaking decisions that the game requires you to make. Some of the guard cards will be elite soldiers that are much trickier to defeat. Since the back of these cards are of a different colour, the player has some prior warning. This can make defeat even more infuriating as you curse your own greed. Kodachi will test your bravado and judgement to the full, especially when the other players are goading you on to take on just one more guard. This really is the benchmark as to how a card game implementation of a board game should be executed. The striking artwork is lifted directly from the board game. This gives Kodachi a nice sense of continuity for those who have played Ninjato, whilst allowing new players a chance to experience the beautiful and atmospheric art for the first time. Initial games can drag a bit until players realise the true significance of the clan cards and how they can bring a quick end to the game. Once this particular hurdle is cleared, Kodachi becomes as sharp and fast as a flying shuriken.