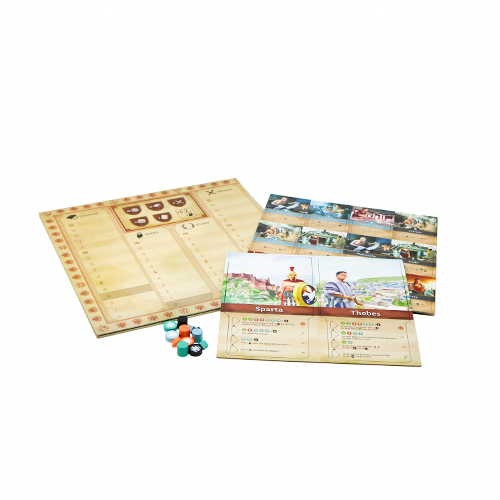 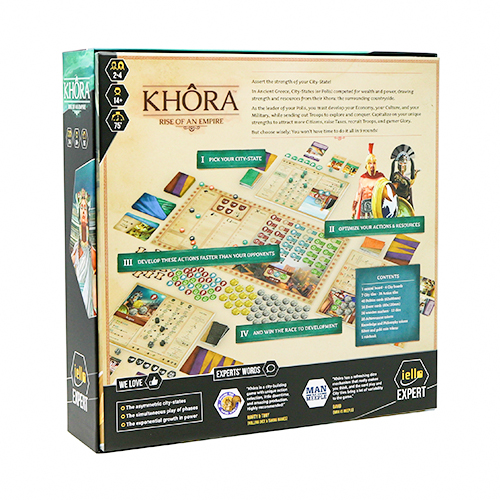 Khora: Rise of an Empire

you could earn 4119 victory points

you could earn 4119 victory points

Khôra: Rise of an Empire is the first title from iello’s ‘Expert’ range. iello’s catalogue, in the past, catered towards lighter games such as King of Tokyo. Khôra carries with it a little more weight. It’s more like a step up into the world of medium-weight strategy games. Here, 2-4 players compete to build ancient Greek empires, using simultaneous action selection. Pla…
Read More
Category Board Games Tag Zatu Gold Award SKU TCS-KHORA Availability 3+ in stock
Share
Share this
81%
Find out more about our blog & how to become a member of the blogging team by clicking here

Khôra: Rise of an Empire is the first title from iello’s ‘Expert’ range. iello’s catalogue, in the past, catered towards lighter games such as King of Tokyo. Khôra carries with it a little more weight. It’s more like a step up into the world of medium-weight strategy games. Here, 2-4 players compete to build ancient Greek empires, using simultaneous action selection.

Players each have their own asymmetric action board, which features some tech tracks. There’s also a main board with further tech tracks, for things such as population, tax/income, exploration, and so on. Khôra lasts for nine rounds, with the aim being to score the most points, in classic Eurogame fashion. Rounds have a series of phases to them, starting with an Event for the round, and then players roll their own D6 dice.

You get to allocate the outcomes from these dice to action selection tiles. Each player has the same tiles, and you’ll do this in secret, in simultaneous fashion. You can select any actions you want, but each action has a number. If the die you paired with it is lower than the tile’s number, you have to pay the difference in population. The actions are things like improving your military, trading, or playing Politics cards.

The latter involves a hand management aspect. These cards offer great boons… if you can afford to play the card. You need to meet certain set collection requirements to play some of them. That’s where you Knowledge and Exploration tech tracks come into play. You can buy Knowledge tokens to help play these cards, as well as earning points. The ways in which these tech tracks dovetail with one another is clever – you can take on a range of differing strategies. How will you ensure your empire rises to the top?

Khora: Rise of an Empire is a 2-4 player game published by Iello as part of their 'expert' range. These are games that are high on strategy. Each player is head of a blossoming city in Ancient Greece, in the 5th-4th century BCE. The person who has produced the best functioning city and acquired the most points is the winner.

At the start of the game, each person will choose one city to be head of. There are seven to choose from in total, and each city has a different specialism. Sparta and Argos have prowess in battle, whereas Athens specialises in culture. Knowing your city's speciality gives you the best chance of plotting its route to victory.

Such a Drachma Queen

You start with four drachmas (the Greek currency), two dice, plus whatever else your city gives you as a starting bonus. You also have seven action tiles, which are your options for the action phase.

Each player board has three progress tracks: economy, culture and military. You start the game at the bottom of all three tracks.

Finally, you also have five politics cards, these are useful in gaining extra abilities or bonuses during the game. You play a game of Khora over nine rounds. The rounds themselves are seven phases long, the first of which is the event announcement. For eight of the nine rounds, the resolution of the event doesn't happen until the end. After the event announcement, each city collects tax in the form of drachma. You earn tax by climbing up the tax track on the main board.

The third phase is dice rolling, and the dice are significant to your actions throughout the rest of your turn. Once you have rolled your dice, you choose which of the two actions tiles you want to play, allocating a die to each one. Each action tile has a number on it, ranging from 0-6. If the dice shows a higher number than that on the action tile, you can take the action freely. If not, you can spend a number of citizens equal to the difference. The fourth phase is then carrying out the actions you have chosen. These are related to philosophy, legislation, culture, trade, military, politics and development.

Tracks of My Tears

Once you have carried out your actions, you move on to the progress phase. This gives you the opportunity to increase your economy, culture, or military track by one space. Climbing these tracks can also give you additional bonuses, including an extra dice for the action phase. You then resolve the event drawn at the start of the round, as well as giving out any achievement bonuses. These bonuses can help you move up the tax or glory track. At the end of the game, you gain points for your end of game bonuses on politics cards. You can also gain points for end of game bonuses on your city's development card. Finally, you can gain points by multiplying your major knowledge tokens (earned by playing military actions) with your position on the glory track.

Before I move on to my thoughts about the game, I should probably confess something. My original draft of this review had twenty-two uses of the word 'track'. In my defence, there are a lot of tracks. Seven in total. Three on your player board, plus four on the main board. There isn't really an easy way of telling you about the game without mentioning tracks repeatedly. Try not to let that put you off though, as there is a very good game to be found here.

We Built This City on Philosophy Scrolls

Each city is different. They have different starting bonuses and varying abilities as they grow. In one way it can make the game harder to teach - your best route to victory isn't going to be the same as your opponent's. However, I would say it allows players the chance to explore more possibilities. There's no one clear route to victory, so trying to find your own way can be very rewarding. It also increases replayability. If you lose, you have a nagging feeling of 'maybe if I played this way instead...'

There are also several ways of preventing a bad dice roll from ruining your plans. The ability to spend citizens to overcome this is very useful. There is also chance to add a third dice, once again giving you more options. I also love the artwork. You can tell straight away that the game is set in ancient Greece. The politics and event cards are also very regal looking. The use of symbols is easy to follow, and the instructions on the cards are easy to understand too. I like that each city card has a brief overview of that city's history. As well as having more tracks than Ticket to Ride, there may be other elements that people might not enjoy.

The first time I played Khora, I played as Corinth. My sister played as Sparta, famed for its army. This meant that Sparta's path to victory was geared towards the military track. At the start of every round, we revealed the new event. Most event cards benefitted the player with the highest number of troops. Not only do most of them result in the leader gaining a reward, but the person in last place is fined. This may not be as bad in a four-player game. But in a two-player game, it will always be the same person losing out.

The game can start off quite slowly. For the first couple of rounds, you may not gain much tax, which can really limit your options in the progress phase. As you move further up the tracks, progress is more and more expensive. If you struggle to gain tax, it makes everything else harder to do too.

Is Khora a one-track pony? Overall Khora is a very good middle-weight game. After I played it the first time, I immediately wanted to play again. The box insert means set-up and takedown time of the game is very straightforward. It also appears that care has gone into making the game historically accurate. The dice and action phases can also be done simultaneously, meaning that downtime between games is also very short. If you are looking for a way into slightly crunchier games, then Khora might have you on the right track.