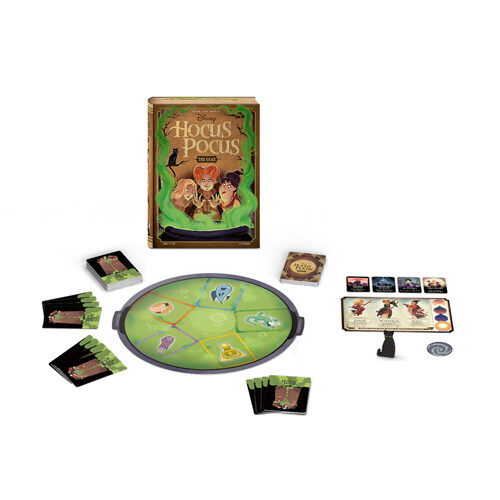 Add to Wishlist
A Bunch of Hocus Pocus – In this cooperative card game, players work together to protect Salem’s children and stop the Sanderson sisters from completing their wicked potion before the sun rises. Play potion ingredients to the cauldron and match all the colors or ingredients. Binx will offer a helping hand, while Winifred, Mary, and Sarah cast spells to thwart your plans. Use tri…
Read More
Tags Disney, Exceptional Components, Halloween, Ravensburger, Silver SKU TRV-26946 Availability 5+ in stock
Share this
74%

A Bunch of Hocus Pocus – In this cooperative card game, players work together to protect Salem’s children and stop the Sanderson sisters from completing their wicked potion before the sun rises. Play potion ingredients to the cauldron and match all the colors or ingredients. Binx will offer a helping hand, while Winifred, Mary, and Sarah cast spells to thwart your plans. Use tricks like Burning Rain of Death and Billy Butcherson to help you along the way! Perfect for Families and Hocus Pocus Fans – Whether you're playing with a group of Hocus Pocus fans, classic board gamers, or your family, Disney Hocus Pocus: The Game is perfect for any game night occasion and makes a great gift!

I love Halloween. I love Bette Midler. I love Hocus Pocus. And I love cooperative games. Hocus Pocus: The Game by Ravensburger was something I couldn't wait to get my hands on!

It's Just a Bunch of Hocus Pocus

Hocus Pocus: The Game is a light, cooperative and easy to learn game, with some surprisingly strategic elements. Though I definitely think the concept is simple to grasp, it can be difficult to master, depending on how well you and your fellow players communicate within the set restrictions.

To defeat the witches and claim a team victory you must stun a witch, thrice, bringing the sunrise. To do so you must match 5 cards in either colour or ingredient type to ruin their potion. Each player may place one card at a time, in turn order, until the match is made. However, each player’s hand is secret and players may only ask ONE specific question before they play. Oh and you’ll need to stun the witches before the ingredient draw pile runs out and their potion is complete. Suddenly the game feels much more complex! 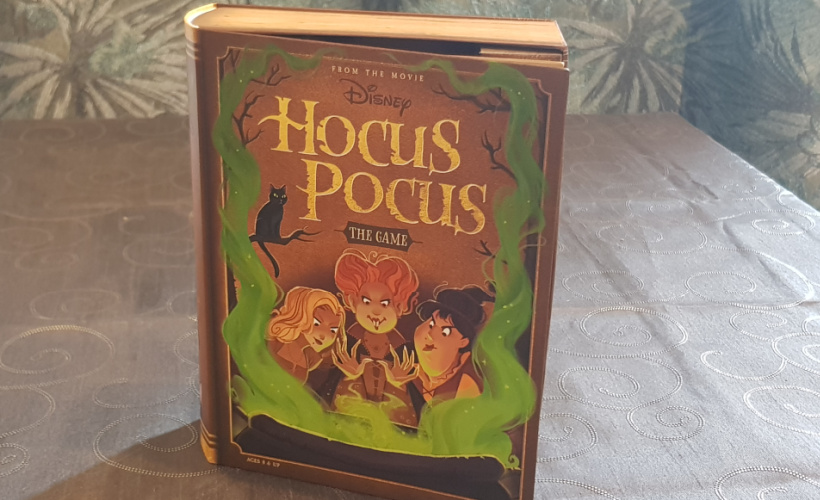 Set-up is a simple affair. The game consists of one Cauldron Board, a Witch Board, one Stun Token, one Sun Token, 4 Trick Tokens, 50 Ingredient Cards, 13 Spell Cards and a Thackery Binx Meeple.

The cards are shuffled and form their respective decks and each player receives their ingredient cards, depending on the player count. The sun token is placed on the lowermost space on the witch board, and the stun token nearby until needed. The trick tokens are placed within reach of all players as is Thackery Binx. The board is placed in the middle of play, and you’re ready to go. 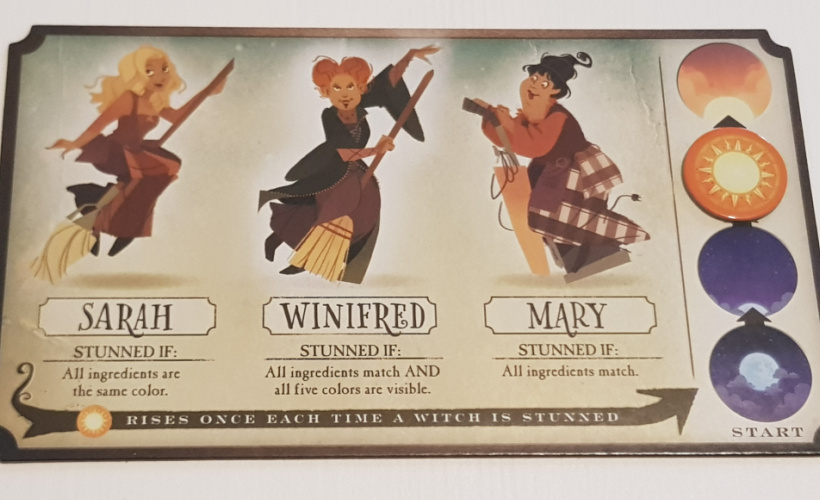 You Lit the Black Flamed Candle?

So now all that’s left to do is defeat those damned witches! The secret is going to be in how well you can communicate with your team which cards you have in your hand, with just one question.

The aim is simple - match 5 cards around the board. Either in colour or type and you stun a witch. Which witch you stun depends on the cards you matched.

If you match 5 of the same colour you stun Sarah. 5 of the same ingredient, it’s Mary. And if you manage to 5 ingredients, all of DIFFERENT colours then Winifred is stunned.

This is important, because some ingredient cards have a spellbook symbol and require you to draw a spell from the spell deck and action it. These usually impose unpleasant effects that have the power to ruin your plans, however if the witch shown on the card casting that spell is stunned, the spell has no effect! Do check carefully too, just because the witch appears on the card, it doesn’t mean she’s casting it. The name at the top of the card denotes which witch casts the spell. The only card that all three witches cast (and is therefore unavoidable unless Trick Tokens are used) is the Take Flight card. 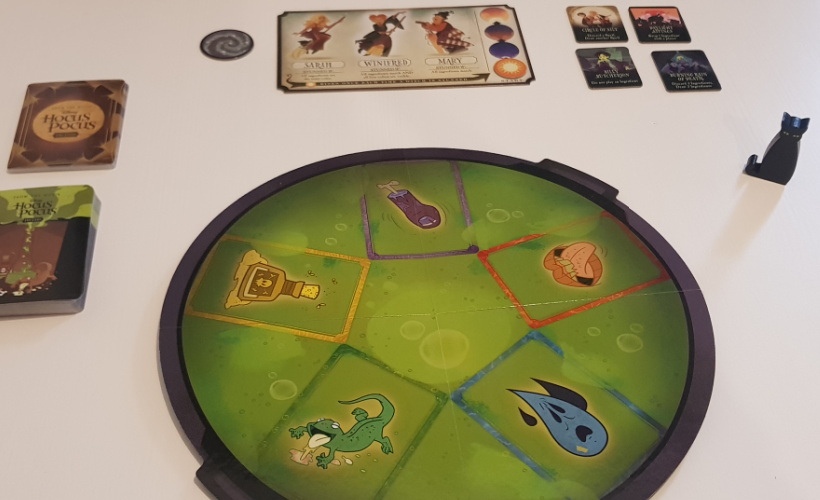 Why was I Cursed with Such Idiot Sisters?

Some ingredient cards have a Thackery Binx symbol. And it’s these cards that you’ll want to place early on, as whoever played the last ingredient showing Thackery Binx may show and play with their hand face-up. So all other players now know what that player has and they can alter their game accordingly.

There are also four trick tokens that can be played once only throughout the game, if you find yourselves in a pickle. For example, if there was 4 Oil of Boil currently showing on the Cauldron Board, and one Eye of Newt in Green and in your hand you had neither Eye of Newt or Green, but you didn’t want to replace one of the Oil of Boil’s. You could use the Trick Token Billy Butcherson and choose not to play an ingredient on your turn.

If you do have an ingredient that you can play, you must. Even if it’s going to ruin the matching ingredients that you and your team were working towards. 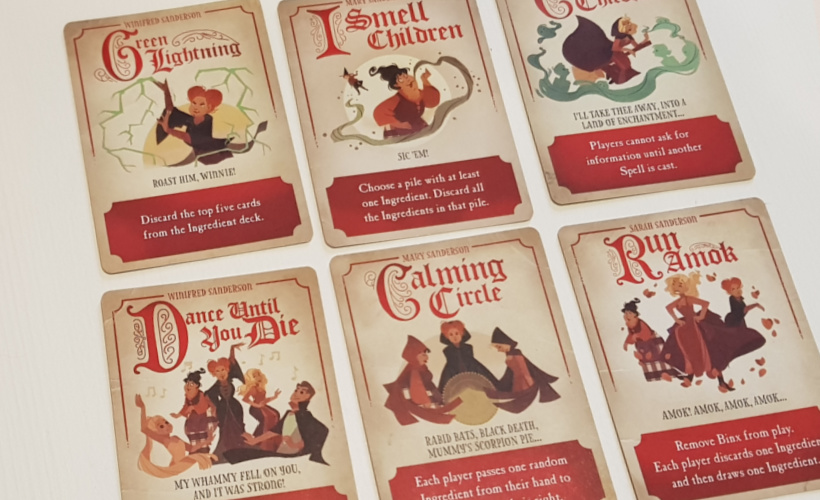 Before even opening the game, the nostalgic nods to the classic nineties film are being made. The box is The Book, or at least intended to mimic a spellbook and is an interesting design. Whilst I’m totally here for the gimmick, and do enjoy it’s presence on my shelf, it’s not actually that well designed for the job it’s intended for. If you choose to stack it like a book, the front cover/lid is likely to open and the contents spill. If you stack it horizontally and place anything on top, the cover/lid will begin to bow and buckle under the pressure. I, personally, go with vertical stacking. I have to make sure it’s flush against another game and even still, a board and the rules tend to fall as soon as I lift the game. For me, this isn’t a massive drawback, but it’s definitely something to note.

The rest of the components are great and the artwork is spot-on, it’s nice to see that they went for something other than movie stills, I really think it adds to this game. The boards and tokens are of good quality, and there’s a cat meeple...He doesn’t have the highest functionality in the game, but who doesn’t want a cat meeple? 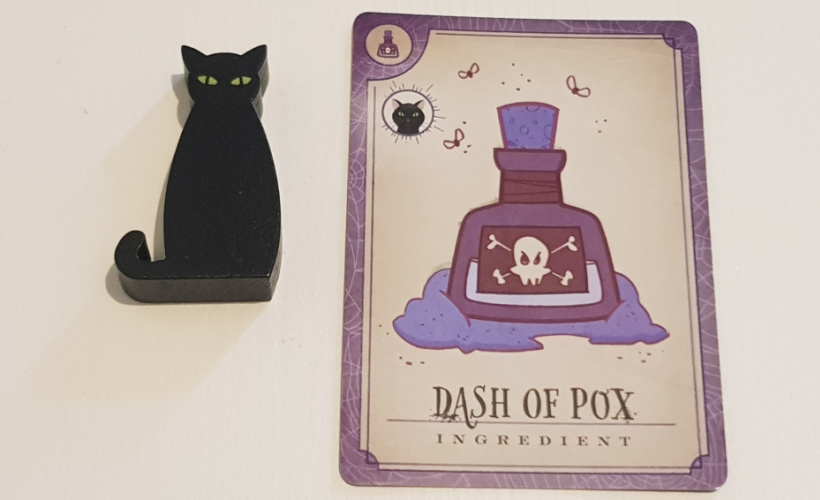 I Put a Spell on You

Overall, for me, Hocus Pocus the Game ticks a lot of boxes. It’s easy to grasp, has a quick set-up and gameplay time. It can definitely be played in around 30 minutes, meaning we usually play a few games. It’s cooperative, it has some mild strategy and it can host two to six players.

We’ve not managed to win every time, so the game does pose a challenge, but it’s not usually a crushing defeat that leaves you feeling...well defeated. It’s really simple to give the cards a quick shuffle and play again with a different plan.

There are also some easy alterations you can make in order to make gameplay harder, should you wish. Such as deciding as a team that in order to win you’ll need to stun each individual witch once or that having the Thackery Binx meeple means you can only show one card rather than your entire hand.

Honestly, the game isn’t going to change your world, but it’s a great warm up for something meatier. I’m very pleased to have it in my collection, and due to time constraints it’s hitting the table rather frequently.

If Hocus Pocus meant anything to you in the nineties, give it a go. Expect a light and simple game with decent replayability and you won’t be disappointed! And if that doesn’t scratch that spooky cooperative itch, why not try the more challenging Horrified or even the super challenging (at least for me) Arkham Horror Living Card Game.