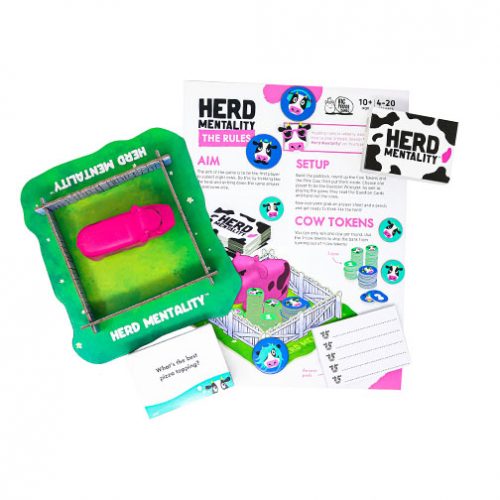 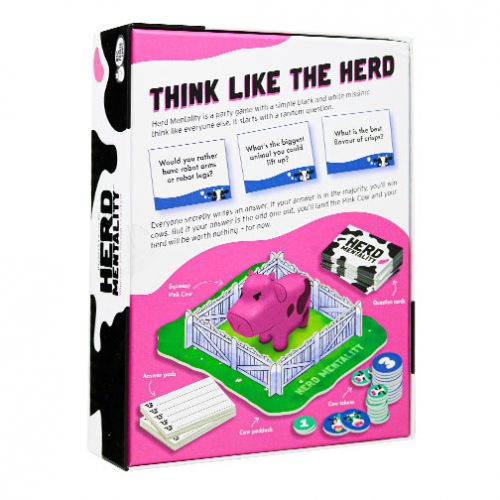 you could earn 1869 victory points

you could earn 1869 victory points

Herd Mentality. Mooooooove it and stop chewing the cud! Herd Mentality is not a game about standing out from the crowd but being part of it! In this game being unique is a bad thing. Coming from party game connoisseurs Big Potato, you know you are getting a well thought out twist on the usual party game faire. The object of Herd Mentality is to be the first player to 8 points, but y…
Read More
Category Board Games Tags 6-8 Years, 9+, Best Sellers, Big Potato, Fun For All the Family, Zatu Gold Award SKU ZBP-HM01 Availability 3+ in stock
Share
Share this
82%

Mooooooove it and stop chewing the cud! Herd Mentality is not a game about standing out from the crowd but being part of it! In this game being unique is a bad thing.

Coming from party game connoisseurs Big Potato, you know you are getting a well thought out twist on the usual party game faire. The object of Herd Mentality is to be the first player to 8 points, but you must get there alone, if not you keep going until someone breaks ahead!

Each player, or team if you like, takes a note pad and then a card is flipped over. The card will give a category like ‘Best fast food restaurant’ or ‘Biggest animal you could take in a fight’. Everyone jots down an answer and when everyone has you all reveal them. You work out which is the biggest ‘herd’ of the same answers and each of the people in this herd gat a point. Among the remaining answers if there is only one unique one that person gets the included pink cow. If you have the pink cow you cannot win the game! Simples!

The beauty of the game is in trying to game and gauge the other players. I might think I can take a bear in a fight but will granny? Or anyone else? Would it be safer to say a dog?

The variety of cards is really cool as is the unnecessary pink squashy cow that passes among players who got a bit too cocky. A great choice for families and more serious game groups, bring the laughter whatever the occasion.

Is it good to follow the crowd, or is it better to carve your own furrow? Nathan takes a look at Big Potato Games latest piece to see whether he is in the herd or a lone wolf.

I was always told to be myself and not get swayed by others' opinions. This might be good advice for life. But for Herd Mentality, this will leave you well behind the leading pack.

Big Potato Games have a reputation for great party games, or games to be played in a large group. Herd Mentality is the latest in their list of titles. It plays for 4 to 20 (yes, twenty!) and is a fun word and question game where there are no wrong or right answers. This game is all about being attuned to how the other players might think. Here it pays to be in the majority, rather than the maverick.

The concept of Herd Mentality is wonderfully simple. One person asks a question or a topic for discussion. This is all about opinions rather than factual answers, so no one needs to be left out. Each question is printed on a small card and they cover a wide range of topics. What is the best pizza topping? Is full-fat, semi-skimmed, or skimmed milk best? Where is the best place for a first date - a restaurant, a pub, or a disco?

Gamers are given a few seconds to consider their responses. Then they write their answers on a piece of paper. In turn, each answer is read aloud and often there will be one response that forms the majority opinion. For example, "What is one part of your body that you can live without?" When we were playing yesterday, five of us chose "appendix" and one person said "little toe". All of us in the majority (the appendix group) gained a cow token and became part of the herd. The sole renegade (who has lost their little toe) is limping in the corner and is given the pink cow (this is the symbol that you are not worthy to be part of the herd). They are now ostracised and can no longer score any points until someone else selects a maverick answer.

The game continues with questions being asked and everyone trying to choose answers that would fit with the majority. When one person has eight points (or whatever target is selected) the game is over.

The first thing that strikes you is the box. Not only is it coloured like a Friesian cow (white with black patches for those who are city dwellers), but it has a texture of soft fur too. There has been some serious thought about making this game stand out from others on the shelf. The components in the box are of very thick card. The tokens are double-sided and each cow has a different facial expression (if cows could pull faces that is). This is another nice touch. All of the tokens fit nicely in the assembled field in the middle of the table. The pink cow looks longingly over the fence at greener pastures elsewhere.

There are literally "stacks" of question cards. The print is a little small but is still clear to read. If you do not like some questions you can easily add your own personal spin. For example, "If you didn't write game reviews in your spare time would you rather; make cheese, go metal detecting, or take up Morris dancing?" The responses you get will vary every time depending on who you play with. This game is a great ice breaker. Within seconds of starting, we were in hysterics and berating the person who would choose to lose their little toe rather than their appendix. The discussion can be as surreal as you want it to be. It is one way to get to know others.

The key to this game is to try to predict others' responses. Even though you might be a super-fit, health-conscious individual who only drinks skimmed milk, you may be better off putting personal preferences to one side and selecting full-fat milk when you look at your fellow gamers. The beauty of Herd Mentality is that it is all about opinions. No one can have a wrong response. The answers given might provoke a heated discussion and that is where Herd Mentality is placed. The winning or losing (depending on the points scored) is almost of secondary importance. This is all about playing the game and the fun that can be had just by participating. Even if you are stuck with the maverick cow for several turns (and unable to score) this does not matter. You are still just as included in the questions and answers.

And in the winning, is that something you should be pleased with? I prefer to consider myself as an "outside the box" thinker who is not too constrained by established norms and regulations. Is being part of the herd something to be proud of? Or perhaps I am so good at reading people's minds that I know their likes and dislikes - but for the sake of doing well in the game, I will choose (on this occasion) to conform! One approach is to say that I refuse to conform and want to retain the pink cow and wander off in my own direction, throwing left-of-field opinions out just to encourage discussion.

I think for Herd Mentality it does not matter who has won. The game has succeeded if people have fun, are discussing their responses, and are getting to understand each other's likes or dislikes.

Big Potato Games suggest that up to 20 could play the game. Negotiating or counting the responses for a huge herd would be challenging and be a little cumbersome. Also, it would be very difficult to have just one individual having a unique response and the other 19 all saying the same answer. For such a large crowd the "pink cow punishment" may not work well. Instead, you could get all the mavericks (single answer responses) together and label all of them as "pink cows" so that none of them could score points in subsequent rounds unless they rejoin the herd. [Here's a conundrum - if the mavericks outnumber those in the herd, should they not then be considered as the majority?]

The sweet spot for this game would be between six and ten players. This will provide sufficient diversity in responses to give plenty of discussions. With this number, a majority opinion is more likely to be formed. When we played with this number of players we varied who could be question master and who would start the discussion and responses each turn. With six the game played easily at a table and lasted about 40 minutes.

Herd Mentality is a relatively new game (released 2020). It is priced competitively and it has plenty of replayability. This is one game that can easily return to the games table over and over again and so that reason it is actually very good value for money. This is an ideal family game that allows children to express their opinions [who is the best Disney Princess?]. However, for children under seven years, they may not grasp the context of the game - ie they need to choose a princess that Granny or Grandad can actually name, rather than the coolest princess of them all.

This is a well-made game. It encourages talking and certainly breaks the ice in a large group. It is the sort of game that can start off any games evening. It is relatively quick and takes seconds to set up. The rules are super-simple so that anyone can grasp them. The challenge is to try and think like the herd, not as an individual. I am grateful to Zatu Games for offering Herd Mentality for review. This filler game will stand out from the crowd on any games shelf and be one to be selected when a gaming group wants a light-hearted, fun game.

Editors note: This blog was originally published on June 30th, 2020. Updated on February 1st, 2022 to improve the information available.