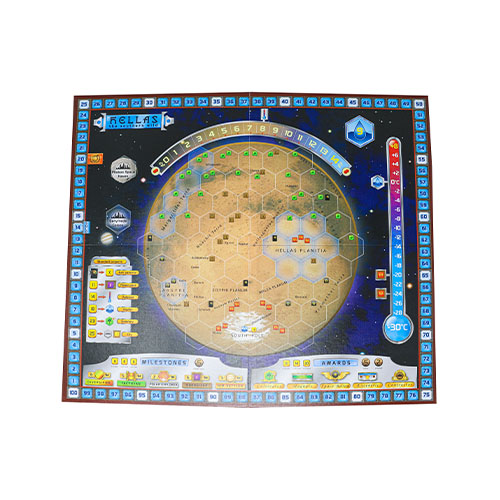 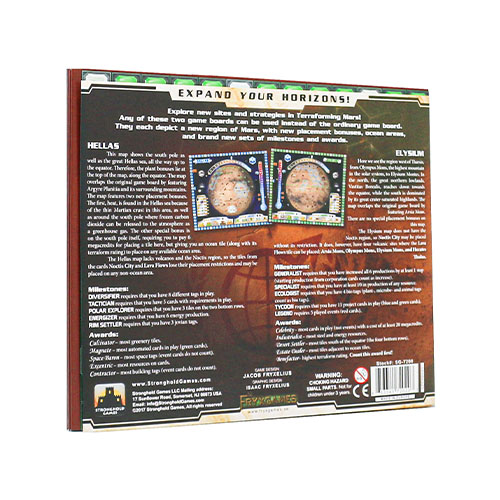 you could earn 2089 victory points

you could earn 2089 victory points

Terraforming Mars: Hellas & Elysium, the first expansion for Terraforming Mars, consists of a double-sided game board presenting two new areas of Mars: – Elysium takes players almost to the opposite side of Mars’ equator, with vast lowlands for oceans in the north and a dry, mineral-rich south. Place a tile on Olympus Mons, the highest peak in the solar system, to ga…
Read More
Category Board Games Tags Best Sellers, Stronghold Games, Terraforming Mars SKU ZBG-SG6005E1SG Availability 3+ in stock
Share
Share this
90%

Elysium takes players almost to the opposite side of Mars' equator, with vast lowlands for oceans in the north and a dry, mineral-rich south. Place a tile on Olympus Mons, the highest peak in the solar system, to gain three free cards!

Hellas, the southern wild, includes Mars' south pole and the enormous seven-hex Hellas crater that just begs to become a giant lake. Building around the pole gives you new placement bonuses in the form of heat and possibly even water.

Each of these maps consists of new sets of milestones and awards with relevance for that particular map. Place three tiles around the south pole to be a Polar Explorer, for example, or race to have the most estates beside water on Elysium!

Terraforming Mars was one of the hottest games of 2016 and even now is still one of the highest selling and most talked about board games out there. I came to this game late, resisting the hype until I played Sentient, which despite being a totally different game, had a similar near-future theme. I then began looking at Terraforming Mars more favourably (because of my liking of this theme) until I borrowed the game off a friend. Upon reading the rules I bought a copy for myself (having never even played my friend’s copy) based purely on the fact that I knew I would love it!... I was right!

In the game players take the role of futuristic corporations who are competing to terraform the planet to make it habitable for human life. Essentially, the corporations are racing to gain prestige (known as Terraforming Rating, or TR) by increasing the three parameters needed for human life – raising the oxygen level from 0% to 14% (allowing us to breathe), increasing the planet’s temperature from -30˚c to a cosy(ish) +8˚c and adding nine oceans to the planet’s surface (to allow Earth-like weather). There are many other ways to earn TR, including adding cities to the planet, introducing animals such as pets, fish, ants and worms(!) as well as earning milestones and awards.

The fact that this massively popular game may spawn some expansions is perhaps a no-brainer given the Mars-sized level of demand and enthusiasm out there. In this review I am looking at the first expansion, the Hellas & Elysium maps.

Lots of people out there say they would struggle to get bored of Terraforming Mars, with its 208 unique cards offering an almost infinite combination of things to do. Indeed, no two games are ever quite the same. People have also said that the base game map, now known as the “Tharsis” map, offers enough that maybe no other map is needed. I decided that while that may be the case for most, I love the idea of terraforming different sides of the big Red Sphere and bought Hellas & Elysium at the same time as the base game.

Essentially, this expansion is just (and I say “just” without any hint of malice or sarcasm) a double-sided map board, the exact same size as the base game board. It is wrapped in a thin piece of card with the cover on one side and rules on the back. You may think that without any other components or cards it doesn’t sound like it would be worth the money, but the newer layouts are great – offering new ways to plan your domination of Mars and interesting things to look out for.

But the area where the Hellas & Elysium maps really come into their own are the new milestones and awards on each board, which can completely change your focus and strategy, which I will tell you more about below.

The Hellas map, known as the "Southern Wild”, features the south pole of the planet. The south pole space itself has a special bonus requiring you to pay six Megacredits for placing a tile on it, but you then get a free ocean tile to place on any available ocean area – worth the trip! There are also heat bonuses to be found on the spaces around the south pole, and the potential to earn the Polar Explorer award makes this an area worth terraforming. Moving up the map you’ll see the “Great Hellas Sea”, which is a humungous seven-hex ocean, and the Nachis Terra, an area rich in steel bonuses. The equator is at the top of the map and there are predictably lots of plant bonuses to be collected there.

It ain’t Easy(um) on Elysium

Elysium is the region to the west of the base game’s Tharsis map. In the north of Elysium, the ocean-ready lowlands, known as Vastitas Borealis, spread down through the Amazonis Planitia towards the plant-rich equator. The Estate Dealer award can make the areas next to the ocean an attractive place to settle. Heck, I might even invest in an apartment there! The south is dominated by its great crater-saturated highlands – this is effectively a more sparse desert area, but offers the potential to win the Desert Settler award, making the south more attractive than it would seem at first.

The Elysium milestones are Generalist (increased all six productions by at least one step), Specialist (at least 10 production of any resource), Ecologist (four bio tags), Tycoon (15 project cards in play) and Legend (five played events). The awards on Elysium are Celebrity (most non-event cards in play with a cost of at least 20 Megacredits), Industrialist (most steel and energy resources), Desert Settler (most tiles south of the equator) Estate Dealer (most tiles adjacent to ocean tiles) and Benefactor (highest TR before end-of game scoring takes place).

Initially I was least enthused about the Elysium map as it appears at first to be similar to the base game’s Tharsis setting, but I think at the time of writing it is probably my favourite of the three – perhaps because I got my first non-solo Terraforming Mars victory on Elysium. Happy memories.

The milestones and awards are not used in the solo game so it is just the maps that come into play here – I think that the differences in the maps make it a worthwhile purchase for solo gamers, as it’s nice to rotate between the maps each game for a bit of variety and a slightly different spatial challenge.

I have to say I’m lucky to have a local games group and a family who play games but I also play solo games (I can’t get enough gaming!) and Terraforming Mars is definitely one of my favourite solo games.

For some, Hellas & Elysium is not an essential expansion for what is already a great game, as it doesn’t really expand upon the base game, just adds a bit more variety. But in my opinion, for the price, the variety it offers in terms of the layouts, milestones and awards make it a must-buy.