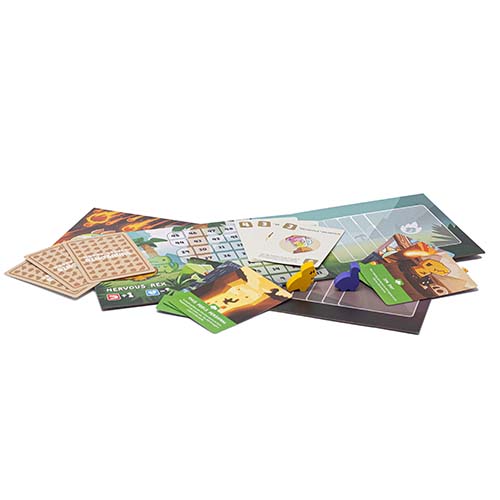 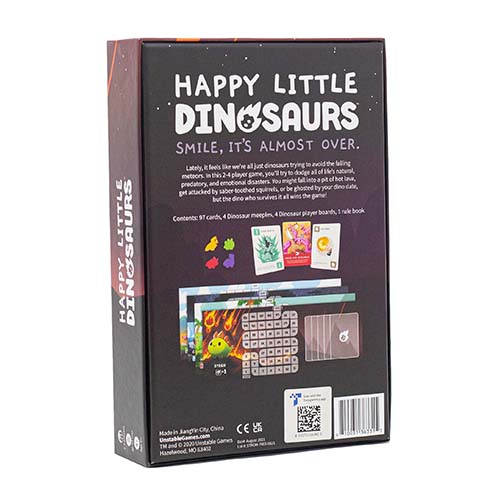 Lately, it feels like we’re all just dinosaurs trying to avoid the falling meteors. In this game, you’ll try to dodge all of life’s little disasters. You might fall into a pit of hot lava or get ghosted by your dino date, but the dino who survives it all wins the game! In Happy Little Dinosaurs, the first person to reach 50 points, or be the last Dinosaur standing, wins the g…
Read More
Category Board Games Tags Best Sellers, Zatu Gold Award SKU ZBG-TEE5363UUBSG1 Availability 3+ in stock
Share
Share this
85%

Lately, it feels like we’re all just dinosaurs trying to avoid the falling meteors. In this game, you’ll try to dodge all of life’s little disasters. You might fall into a pit of hot lava or get ghosted by your dino date, but the dino who survives it all wins the game!

In Happy Little Dinosaurs, the first person to reach 50 points, or be the last Dinosaur standing, wins the game! During each round, you’ll flip a Disaster card featuring a Natural, Predatory, or Emotional disaster. Each player will play a Point card in hopes of collecting points and avoiding the disaster.

You will work to avoid all of life’s little disasters and laugh as they happen to your friends. If you collect 3 Disaster cards of the same type OR 3 different types of Disaster cards, you will be out of the game. Point cards feature weapons, trinkets, and good luck charms that you use to collect points and avoid disasters. Each card has a point value between 0 and 9 that you will use when scoring a round. You can use Instant cards at different points during the game to tip the odds in your favor or save your Dinosaur from certain death.

Player boards include your Dinosaur's traits, an Escape Route you use to track your score, and a Disaster Area where you will collect Disaster cards. You'll move your Dinosaur meeple along the Excape Route on your player board to track your score. Will you successfully dodge the disasters or get eaten by a prehistoric whale? Only the cards can decide.

What happens when a cutesy art style is used to show an apocalyptic event? Find out in Happy Little Dinosaurs!

The concept of Happy Little Dinosaurs is a simple one. Get your little dinosaur to 50 points or the last dinosaur standing at the end of the world.

Initially, you are dealt a hand of 5 cards that have a value and possibly an effect. Each round you reveal a world-ending threat and each player chooses a number. The highest number wins and moves forward that many spaces. The loser gets the apocalypse card and adds it to their playing board. 3 of the same and you are out of the game. Or 3 of any type and you are also burned to death in a fiery and gruesome end. But wait, not every card is created equal. Your card worth 1 point might also have an action that lets you swap scores with the highest value.

You may also play a modifier once all the scores are down that add or subtract to your or others scores. It is partly a game of luck, depending on the cards you get. However, it is also a game of skill. Do you sacrifice a round hoping someone gets rid of their highest cards meaning you are safe for future rounds? It is simple in its complexity and my 8-year-old daughter picked it up really quickly!

So what are my thoughts on Happy little Dinosaurs? It is wonderful. The box art is delightful and vibrant and depressing. A small little dinosaur (called Stego) adorns the front of the box and is surrounded by a hail of meteors raining down destruction. It is a vibrant cartoon of a world-ending situation.

The game plays with up to 4 people and each dinosaur has a cheeky name and modifier. So Stego (the game's mascot) is a +1 for any meteor threat card (meaning that your score is one more than whatever card you choose to play). The other 3 dinosaurs have a +1 but are also negatively affected by other threats by -1 which helps make the tactics of this game a little more interesting. While the lowest scoring player gets the threat card, for every threat card you have you move one space each round, while the winner moves the number of spaces they won by. In one respect you want at least one threat card as that keeps you moving along, but it can snowball quickly.

The game is wonderfully tense and silly and did I mention beautiful. I can't say enough how cute and colourful and depressing each card is. The game aims to highlight that it is OK to not be OK. A powerful message to send at the moment. It does it though in the most delightful way. The scenarios are pun-tastic and crazy. The cards you play in a round are hilarious with one being a pterodactyl frozen in a block of ice and made into a hammer. It is these little touches that elevate the game from "That was a good game" to "That game is great". The gameplay is simple and fun and kept us wanting another round. The problem was my daughter kept winning. There is nothing like an extinction-level threat from an 8-year-old.

It plays quickly but does not feel rushed. It keeps you wanting to play again as each play through holds a different way to attack and defend against your fellow dinosaurs struggling for survival. The quality of the materials that are used are great and it is easy to set up and pack away again.

There is not too much more to say, Happy Little Dinosaurs is a well designed, well thought out filler game that should be in everyone's collection. If for no other reason than the artwork. I think the style really struck a chord with me and just felt perfect. It is a great way to start a conversation with kids about emotions, as they can just discuss what they think the dinosaurs are feeling, what they think of the scenarios but see that it is OK to talk about these things.

As I say, my 8-year-old picked it up really quickly and she loved it, again because she kept winning. It is a game I will bring out for non-gamer friends as it is simple, beautiful and fun. Also, it plays really quickly so that if they don't want to play again it hasn't killed an evening for them. This is a charming game that I would suggest to anyone.