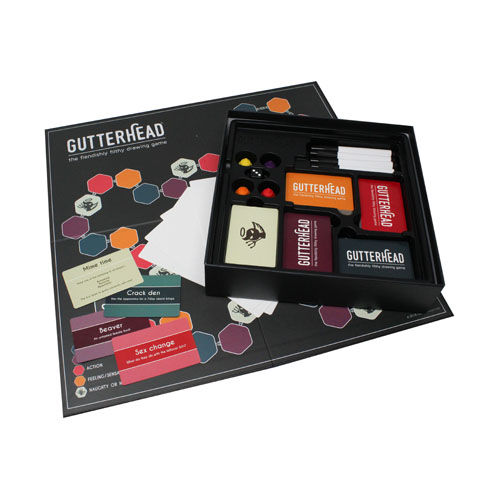 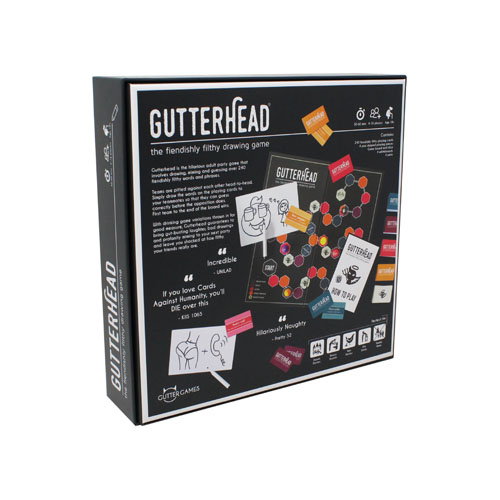 you could earn 2789 victory points

you could earn 2789 victory points

Gutterhead is so simple you can learn the rules in 90 seconds. Teams must tap into their depraved minds and compete head-to-head to out-draw and out-guess their opponents: One player from each team draws the fiendishly filthy word while their teammates frantically try to guess the word before another team does. The first team to guess correctly wins the round. Simple. Each Box Conta…
Read More
Category Board Games Tags Gutter Games, Trivia and Gameshows SKU ZGG-GUT001 Availability 3+ in stock
Share
Share this
87%

Gutterhead is so simple you can learn the rules in 90 seconds.

Teams must tap into their depraved minds and compete head-to-head to out-draw and out-guess their opponents: One player from each team draws the fiendishly filthy word while their teammates frantically try to guess the word before another team does. The first team to guess correctly wins the round. Simple.

Many will have seen the rise of games that challenge your dark humour and encourage you to be what can only be defined as a terrible person! The likes of Card’s Against Humanity tunes into people's darkest thoughts and makes it necessary for people to come up with the most twisted things imaginable. I have tried my fair share of games like this but there is now a new kid on the block looking to tune into people’s dark sides. Gutterhead!

Gutterhead, designed by Kate Jenkins and Zak Walton, is a game for four or more players in which you split into teams and take turns drawing various rude words or phrases, while all racing to the finish line on the game board to be crowned the official Gutterhead! The phrase “get your head out of the gutter” comes to mind with this game and it certainly leads players to do such a thing. A game such as this is only really enjoyable if people commit to it, something my old university friends certainly did when trying this game out!

Gutterhead is fairly simple. Players will be in teams and each team will have a playing piece to put on the board. The playing pieces are rather aptly shaped like a poo, showing new players exactly how bad this game can get (in a good way!). Each turn, one team will roll the dice and move their poo-piece forward that many spaces. The spaces are all coloured and signify different categories, these being Actions, Objects, Feeling, Person/Place and Naughty/Nice.

Each category has a deck of cards and these cards will show a word of phrase that then must be drawn (or acted out if you pick a Naughty/Nice card) and guessed by everyone (not just your team). These words and phrases, as you can guess, have an explicit, sexual theme, and will draw the darkest thoughts from even the most innocent of people! I won’t mention any particular words but needless to say, this game deserves its 18+ rating! The game provides you with a whiteboard and pen which is a nice addition meaning you have everything you need to get drawing filthy images right out of the box!

The first person to guess the drawing (or action) correctly wins their team the next go and play continues. The first team to reach the end will win and be crowned the “Gutterheads”. One thing to mention is that you can very easily turn this into a drinking game, as the game points out on the rules! So, if you’re a university student looking for a game to really get a night going, then this may just be a game for you! As always though, please drink responsibly!

While I have drawn on the fact that Gutterhead can be rather risqué, I have to say I rather enjoyed playing it! Yes, the premise is rather crude but it definitely produced some really comic moments, especially when people weren’t entirely sure what the word is, or if they were just awful at drawing!

The best way to think of Gutterhead is like Pictionary, just for dirty-minded adults! I have enjoyed many a game of Card’s Against Humanity in the past and while this really taps into people’s darker side, Gutterhead makes it funny while doing it! Yes, some of the words you have to draw are awful, but that’s where the fun comes into it! Open yourself up to the concept and you will be right at home, laughing along with the awful drawings of awful things!

It has to be said then that I loved playing Gutterhead and can’t wait to play it again. It will definitely be making an appearance at New Year’s Eve but I think I may keep it away from the family Christmas dinner. If you are looking for a game that takes Card’s Against Humanity and makes it a little more visual, then you need this game! Be prepared to be asked to draw the most horrendous things but feel proud when your team guess it correctly and you storm to victory!