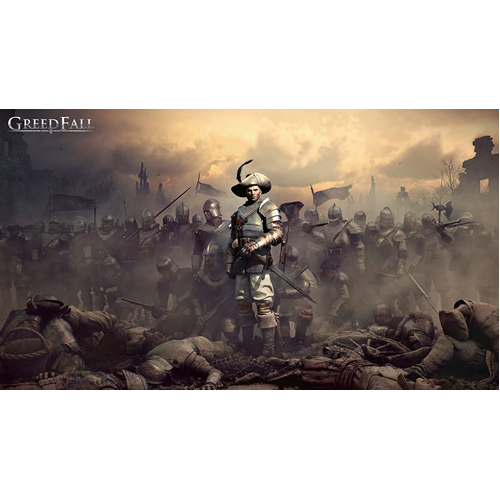 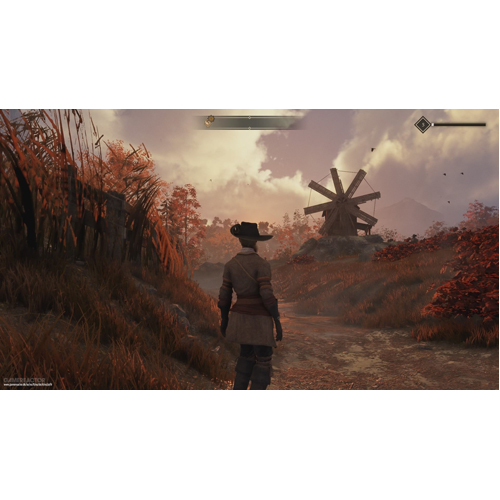 Explore uncharted new lands as you set foot on a remote island seeping with magic, and filled with riches, lost secrets, and fantastic creatures. Forge this new world's destiny, as you befriend or betray companions and entire factions. With diplomacy, deception and force, become part of a living, evolving world - influence its course and shape your story.

GreedFall boasts a lengthy campaign reminiscent of fan favourites like Dragon Age, The Witcher and Mass Effect. After being released in 2019, the game is now available on next-gen consoles and includes the recent DLC, The De Vespe Conspiracy. Developed by a team of 20 on a smallish budget, can GreedFall deliver the goods.

During the campaign of GreedFall players will create and play as De Sardet. De Sardet belongs to the Merchant Congregation faction and acts as their Legate. It is your job to negotiate peace between the other factions in the world. The game begins with the Mainland being overrun by a deadly disease, the Malichor. In an effort to cure the disease, De Sardet travels to Teer Fradee with their Governor cousin, Constantin. As soon as your boots touch the soil of Teer Fradee the plot really takes off and the game begins.

GreedFall is all about its story and you'll spend a good number of hours talking to different characters in the world and making difficult decisions. As you travel around the island, you will meet the Natives and explore themes like colonisation. It's exceptionally political and you will feel like a deer in headlights as you navigate warring factions, conspiracy, and espionage.

The interesting thing about GreedFall is that it isn't tied down by a morality system. The game will not tell you when you are being unreasonable which is a breath of fresh air, but it can also test your moral compass when faced with imperfect outcomes. Instead, the game has a reputation system where you can see how liked you are by different factions and your own companions. These reputations aren't just for show. Depending on how liked you are can affect the story greatly and it can change the way certain quests play out. One thing GreedFall isn't lacking are choices. You really feel as if you are making changes to the world.

Overall, the quests are well-written and cover an array of subjects. But due to the size of the world, you may find yourself backtracking to and from locations as you uncover them bit by bit. Not ideal from a pace perspective but realistic.

In true RPG fashion, you are not alone on your quest. Over the course of the story, you will pick up five companions. Each one belongs to a faction and has their own combat style. Like a Bioware game, each character has their own loyalty quest and depending on your choices you will make friends, or they will betray you later.

The squad mates are multi-layered and exciting to talk to. By becoming friendly with a companion, you can gain the buff they provide. Which is a great incentive to play nice. Players can also romance four of the companions but beware romance is hard. To succeed in love, you must choose three specific dialogue options. If you don't the character will automatically friendzone you. After being ditched by both Kurt and Vasco I consulted a guide to court Siora. The intimate cutscene which ensues is comically animated.

Unlike Mass Effect when I found myself favouring one character heavily. GreedFall rewards you in choosing different party members. I always selected characters based on the quest I was doing. If I was completing a Native storyline, I would always take Siora and then pair her with a companion whose faction was present. This made for interesting party dialogue when out and about Teer Fradee.

Sadly, companion conversations aren't scheduled which means if you blitz through them, you are left with little to say for the remaining 20 hours of the campaign. Though the characters still add remarks when out on missions but nothing substantial.

A Little Poison On My Blade

Combat isn't at the heart of this RPG. It's not going to test you and you won't have lots to play around with. What it does offer is a bit of hack n' slash fun sprinkled with magic. In combat, you can use magical abilities, traps, bombs, melee weapons and guns. It's this variation of approaches which makes combat fun as you can go from stabbing a monster to shadow stepping away and shooting it with your rifle.

However, after playing for a solid amount of time combat will begin to feel repetitive. After hitting the mid-way point, you'll have met all the enemies and know how to approach each one. Fighting then becomes a chore and one I tried to avoid when possible. You can get out of this rut if you re-spec your character throughout and try new things.

Criticism aside, GreedFall does include challenging boss fights which will have you using the tactical pause to plan your next attack. Even as the game grew samey these monsters kept me on my toes and reinvigorated the combat systems. It's worth noting that you cannot control your party's actions during combat. Which is a bummer as I would have loved to play as Kurt wielding his two-handed poison bludgeon.

If you want to avoid fighting the game does have a stealth mechanic. Players can sneak around foes and hide in bushes. GreedFall's stealth only applies to the player which is good but also hilarious. As you hide in a bush undetected, your party will stand in plain sight of enemies, and they will be none the wiser. Due to glitchy NPC pathways, I'm glad enemies have to see me before the jig is up. Either way, it is funny to watch enemies walk by my conspicuous accomplices.

Are Your Boots Worn Through?

Like other RPGs, GreedFall has all the systems you may expect. Players can find, upgrade, and sell armour and weapons. Furthermore, they can create traps, potions, and bombs. The game also includes vendors where you can buy and sell gear. All these mechanics work well and are balanced.

Levelling up gives you points to spend on skills, attributes, and talents. Skills mix up what combat approaches you can take whereas attributes and talents change the way you explore Teer Fradee. As you level up, points in the attribute and talent areas aren't as frequent which means you must lock in the style of play you want. As I wanted to channel a true diplomat, I sunk a lot of points into charisma and intuition. This meant I was able to choose unique dialogue choices and talk a lot of my foes down. But it did also mean I couldn't run across a tree for some tasty loot on the other side. My De Sardet was not the most agile.

Things Are About To Get Dicey

One thing this game lacks is polish. Aesthetically, GreedFall is mundane. Main character models and customisation options are nice to look at but everything else is a bit samey.

The island of Teer Fradee is made up of reused assets. This was disappointing. Once you had been to the first city, you'd seen it all. It made the game lack visual wonder and they didn't pair with the established lore. Every safe house was littered with the same paintings, and I wondered how much commission that artist must have got!

Things only get worse as NPCs are plagued with bad pathway routes and will often be found floating, appearing out of nowhere, or getting stuck behind rocks. These minor bugs also feed into the game's dialogue. The dialogue was riddled with spelling mistakes and NPCs had a habit of using the wrong pronouns. Furthermore, the animations are stiff, and everyone's mouth moves robotically. Not great when the game is centred around diplomatic conversation. At least the voice acting was top-notch.

Despite my grievances, none of these errors were game-breaking. After, 20 hours in I just learned to live with them. But the errors were immersion-breaking. I could never fully sink my teeth into the world of GreedFall as I was constantly being reminded that I was in a somewhat janky game.

GreedFall has all the best RPG features. It has crafting, item management, upgrades, skill trees, branching choices, interesting companions, and a great setting. In fact, it excels so well at some of these that it's crazy to think this game is not AAA.

My favourite thing about this game is its wild setting. The island of Teer Fradee is intriguing and its history enthralling. As you go from tribe to tribe you learn more and the story unfolds at a steady pace. Side quests will have you battling with every faction as you try to broker peace through a storm of coup d'états.

Plot aside, GreedFall does have its shortcomings. Graphically, this game isn't easy on the eyes. Angles are sharp, textures muddy and assets are reused like they're going out of fashion. All these aesthetic issues constantly break immersion and thus you can never absorb yourself in the world.

For its price point, GreedFall is a nice addition to the RPG market. Its setting offers enough to make it a memorable and enjoyable experience, but the game isn't as polished as others out there. It won't challenge you like Elden Ring or enthral you like Mass Effect, but GreedFall has a charm that will keep you playing despite its array of schoolboy errors. An old-school RPG that will leave you nostalgic and hankering for more.