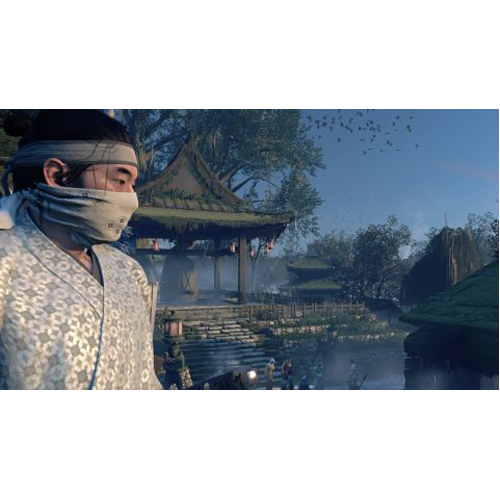 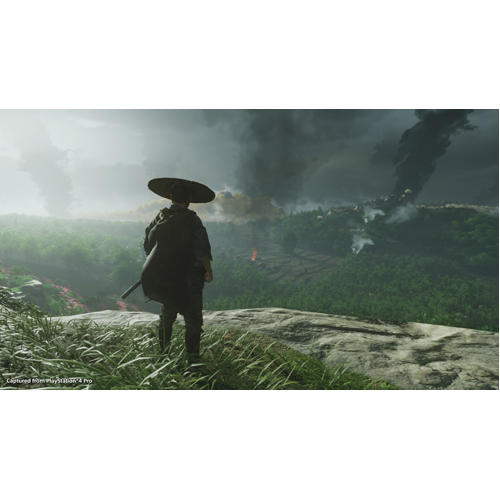 Pay in 3 interest-free payments on eligible purchases. Learn more
Success! We will let you know when this product is available again.
Your email address has been unsubscribed!
Your email address has been unsubscribed!
Notify me when this product is available to purchase!
This email address is already subscribed to this product!
In the late 13th century, the Mongol empire has laid waste to entire nations along their campaign to conquer the East. Tsushima Island is all that stands between mainland Japan and a massive Mongol invasion fleet led by the ruthless and cunning general, Khotun Khan. As the island burns in the wake of the first wave of the Mongol assault, samurai warrior Jin Sakai stands as one of th…
Read More
Category Video Games Tags Action/Adventure Video Games, Ghost of Tsushima Video Games, PS4, Software, Sony, Value For Money SKU VCS-9363705 Availability Out of stock
Share
Share this
91%

In the late 13th century, the Mongol empire has laid waste to entire nations along their campaign to conquer the East. Tsushima Island is all that stands between mainland Japan and a massive Mongol invasion fleet led by the ruthless and cunning general, Khotun Khan. As the island burns in the wake of the first wave of the Mongol assault, samurai warrior Jin Sakai stands as one of the last surviving members of his clan. He is resolved do whatever it takes, at any cost, to protect his people and reclaim his home. He must set aside the traditions that have shaped him as a warrior to forge a new path, the path of the Ghost, and wage an unconventional war for the freedom of Tsushima.

Titles released at the end of a console’s life-cycle would, you hope, feature the very best of what that generation’s games will be known and loved for. With that hope though, comes a concern that a release might feel samey – a ‘copy and paste’ of similar games with just a new lick of paint. Ghost of Tsushima, thankfully, managed to strike the perfect balance. Sure, there’s very little here gameplay-wise that we haven’t seen elsewhere, but when it’s done as beautifully as this, with an engaging and compelling story, in a breath-taking open world, it’s hard not to fall head over heels.

Set in 1274 CE, Ghost of Tsushima has you play as Jin Sakai, a Samurai fighting back against the Mongol invasion of Japan. After an early defeat at the hands of merciless antagonist Khotun Khan, Jin is forced to relook at the Samurai ‘code’ and utilise new tactics that fellow Samurai would find entirely dishonourable in order to take back the island of Tsushima.

Whilst avoiding spoilers, the story (including its many, many side quests) was absorbing and hugely intriguing keeping me guessing throughout. I came to care about a lot of these characters in a way that very few games often manage to achieve. Jin is a mostly quiet, reserved character but has occasional moments of levity that were genuinely funny at times.

There is more depth to him, and his companions, than I was actually expecting to find. Lady Masako’s side quests, one strand of several ‘Tales of Tsushima’, were written as brilliantly as the main story itself (perhaps even more so) and I found myself engaging with these at every first opportunity I had. Her own tale for revenge after her family are slaughtered was riveting and a joy to follow. It’s made all the more powerful by the quality of voice acting from Lauren Tom and Daisuke Tsuji voicing Masako and Jin respectively. It reminded me of the sheer excellence of The Witcher 3’s multitude of side quests, which is perhaps the last time I’ve enjoyed deviating from the main story quite as much as I did.

Voice acting on the whole is impressive, which is integral to crafting a truly believable and immersive story. Sensei Ishikawa, whose tales are equally fascinating as Masako’s, is voiced brilliantly by François Chau who some may recognise from the TV show Lost.

The only slight downside here, is that the speaking animations themselves aren’t amazing. It’s testament to the quality of the voice acting that this is easily forgiven. Aside from that though, animation throughout this game is wonderful. Horses move realistically, arguably better even than The Last of Us Part 2, and combat looks excellent and deadly. It also feels incredibly satisfying.

As the game progresses, you’ll unlock 4 different ‘stances’, each suited against a specific enemy type. You will, via an XP system entirely dedicated to upgrades rather than attributes like ‘strength’, also unlock different combat moves and abilities. It’s hardly the most complex combat system of all time, but it feels so good. Taking on a group of five enemies, faultlessly parrying, dodging and switching between the various stances before they’re all slain feels brilliant. Jin will even stand in a stylish pose at the end whilst his final victim slowly clutches at his stomach and falls to the floor, allowing you to sheathe your sword and, quite simply, look awesome.

The Ghost Of Tsushima

As you’d expect from a game with the word ‘Ghost’ in its title, stealth is a large part of the experience. Many of the encounters can be done entirely stealthily and there is plenty of equipment to lure your enemies, kill from afar and assassinate multiple enemies at once. Much like combat, it’s extremely satisfying if occasionally clunky. Enemy AI isn’t particularly impressive during stealth proceedings, feeling very basic as you throw a simple wind chime to make a single enemy stray into the long grass allowing you to take them out.

However, it’s so incredibly satisfying silently assassinating every Mongol in an entire camp that I found myself not really caring. Clambering over rooftops to survey your enemies below just feels powerful. Stealth is by no means weak, but it’s not quite as Tenchu-like as early marketing perhaps led some to believe.

‘Stylish’ is a word that really sums up Ghost of Tsushima. The game oozes style throughout. Every mission even has its own opening and closing ‘credits’ written in Japanese with the English underneath, that slowly disintegrates away, each with a unique background from within the world – every single one using the beautiful world to its advantage. The open world is visually breathtaking at many times, with areas looking distinct from one another despite its overall size. Games like Assassin’s Creed often choose sheer size over detail and so much of its world can feel ‘copy and pasted’ and soulless. The island of Tsushima never felt too overwhelming in that respect.

The fast travel system means that you aren’t forced to traverse large parts of the map you’ve already enjoyed stumbling across and the lighting-quick loading speeds (especially on the PS4 Pro) help massively there. But when I was riding across the map on my trusty steed, I found myself staring at the striking sights – from huge fields of brightly coloured flowers, forests made up entirely of bamboo trees, to snowy northern peaks, it’s constantly surprising and delightful. It definitely feels like something we’ve never seen before, and it’s absolutely gorgeous – especially in 4K HDR.

Different parts of the map really do feel like entirely new regions and even as the world opens up (it does so twice as the story progresses) it still manages to look and feel unique. Despite its beauty, it does still occasionally feel a little ‘empty’ unlike, say, Red Dead Redemption 2, but the fast travel system along with a plethora of quests prevent this from being any major issue. The game also refrains from utilising a mini-map, instead allowing you to follow ‘wind’ to your destination. It keeps you able to enjoy the stunning vistas, rather than keeping one eye on that bottom corner.

A Quest For Completion

The world is populated with main quests (progressing the story), Tales of Tsushima (the aforementioned stories generally linked to a character or simple ‘side quests’) and Mythic Tales (quests specifically rewarding you with new abilities and equipment). I didn’t find a single dud here. Often, you’ll happen across side quests organically whilst out exploring the world and this really helps you feel immersed within it.

Even outside of the character driven tales, there were highlights. ‘Whispers in the Woods’ sees you explore a foggy forest where an evil ‘spirit’ is believed to be killing innocents. Learning the truth was a fascinating endeavour. There are also other activities in the world, such as Fox Dens (rewarding charms that affect various game stats), Haikus (headbands) and Hot Springs (to increase maximum health) amongst others which, whilst initially enjoyable, do get dull and repetitive over time.

They aren’t essential to your enjoyment of the game though, so perhaps best left to the completionist. There is a lot to enjoy here, with my playthrough (including all of the side quests I discovered) taking at least 30 hours. Unlike other open world games that can often feel like a grind towards the end, this kept me entertained throughout.

That ‘grind’ can often be particularly frustrating when a game locks certain side quests behind a ‘level gate’. Thankfully, here you are held back only by your skill level (save for a very small number of impenetrable camps for story reasons). Even on the hardest difficulty level, enemies won’t have more health, they’ll simply punish you much more for your mistakes and be much more aggressive. This helps keep your katana feel as dangerous and lethal as it should and ensure that you don’t underestimate your enemies.

I’m a huge fan of an RPG that lets you wait until you’re overpowered and dominate a bunch of low level adversaries, but this more unique system works really well in Ghost of Tsushima. It helps maintain the pace for the story that you feel comfortable with, without feeling forced to undertake side quests before you can continue the tale you’re invested in.

Overall then, Ghost of Tsushima manages to craft a stylish, beautiful world with stunning landscapes to behold, anchored by a fascinating story, whilst being an absolute joy to play. Whilst its immersion is broken only slightly by a slight lack of polish (for example, your feet won’t connect with and often clip into a set of stairs), it’s a fascinating adventure and one of the very best Playstation 4 exclusives on offer. It is, without a doubt, an absolute must play on PS4 and a culmination of everything this generation’s best games had to offer with plenty of tricks of its own.