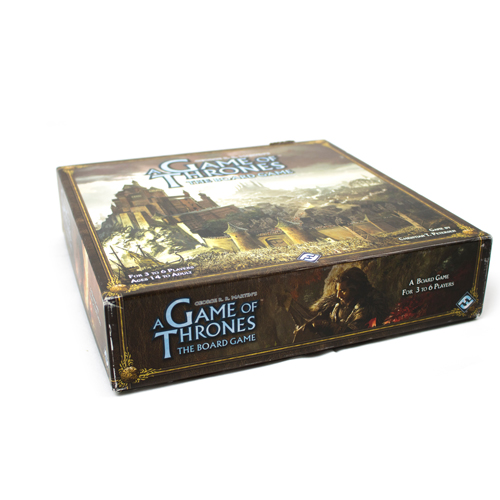 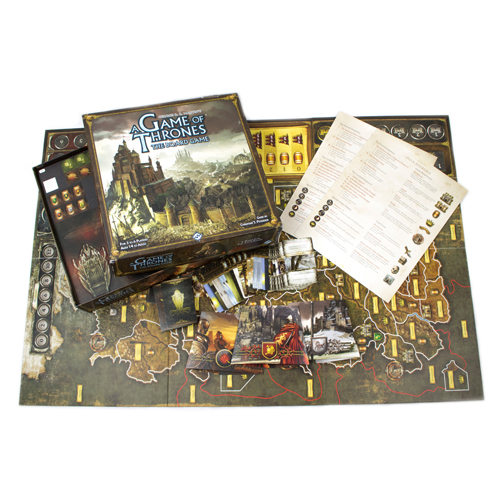 Game of Thrones The Board Game (2nd Ed)

you could earn 3429 victory points

you could earn 3429 victory points

Three to six players take on the roles of the great Houses of the Seven Kingdoms of Westeros. Each player will vie for control of the Iron Throne using diplomacy and warfare. Based on the best-selling A Song of Ice and Fire series of fantasy novels by George R.R. Martin, A Game of Thrones is an epic board game in which it will take more than military might to win. Each player starts…
Read More
Category Board Games Tags Dice Tower, Fantasy Flight Games, Game of Thrones, Podcast Approved SKU ZBG-FFGVA65 Availability 3+ in stock
Share
Share this
85%

Three to six players take on the roles of the great Houses of the Seven Kingdoms of Westeros. Each player will vie for control of the Iron Throne using diplomacy and warfare. Based on the best-selling A Song of Ice and Fire series of fantasy novels by George R.R. Martin, A Game of Thrones is an epic board game in which it will take more than military might to win.
Each player starts with an army of Footman, Knights, Siege Engines, and Ship units, as well as a set of Order tokens and other necessary components. Each player also receives a deck of unique House Cards, which are used as leaders in battles against rival Houses.
Each round in the game is made up of three phases: the Westeros Phase, the Planning Phase, and the Action Phase. The Westeros Phase represents special events and day-to-day activities in Westeros. There are three different Westeros Decks, and each denotes a different global action, potentially affecting all players.
In the Planning Phase you secretly assign orders to all of your units by placing one order token face down on each area you control that contains at least one unit. Players may make promises to each other (for aid or peace, for example), but these promises are never binding.
During the Action Phase, the orders are resolved, and battle is entered! When armies meet in combat, they secretly choose one of their House cards to add strength to the battle. Finally, the Houses can consolidate their power in the areas they control and use that power in future turns to influence their position in the court of the Iron Throne and to stand against the wildling Hordes.
Player Count: 3-6
Time: 2-4 Hours
Age: 14+

King Robert Baratheon goes out on a hunt overly drunk by an extra potent wine he’s been given with the meanest of intentions. Steaming through the forest he decides to take on a wild boar…alone. Well, the rest is history or ermm, fantasy? Now that the King is dead, Westeros plunges into civil war and this is where we start with A Game of Thrones: The Board Game.

Fantasy Flight Games (FFG) first released this game 15 years ago, when the series was not out and maybe half of our readers were still on their diapers. The game has survived time and actually aged quite well, getting even better just like a fine whisky. Its second edition, released back in 2011, came with a much more pleasant to the eye art while addressing balancing issues. But you know what? “Different roads sometimes lead to the same castle.”

What’s A Game of Thrones: The Board Game about?

In A Game of Thrones second edition you’re still fighting for control of the most castles and strongholds. The game ends immediately if anyone gathers seven of those but if by the 10th round no one’s done it, whoever’s got the most wins.

Each player will be controlling a different asymmetrical house: Starks, Lannisters, Baratheons, Greyjoys, Martells or Tyrells. This means you’ll be starting with different resources, at different places on multiple game tracks and you’ll have to deal with benefits and caveats of your geographical position - which will play a great deal in shaping your strategy.

Well, a typical area control game with variable player powers right? Hold your horses my friend. Maybe A Game of Thrones could be just that but there is a lot, I mean, A LOT going on in this game. This is an ambitious design with auction, card drafting and hand management mechanics. Most resources/benefits are up for grabs and can be, and most definitely will be, conquered or negotiated throughout this game.

Did I mention negotiation? There is tons of it! You’ll be negotiating your way to the Iron Throne. A somewhat restrictive supply track that determines the size of your armies will hamper you from just growing a humongous army and crushing everyone else. And when you need the help of others to move forward and you're faced with scarce resources there is a lot of backstabbing.

Yes my friend, this is a game famed for ruining friendships and relationships. I reckon, however, that it all depends on how you wanna play it, there is as much deceiving as you may want and even betrayal can be sweet enough if you’re an elegant backstabber. So don’t be scared but be warned this is not for the faint hearted.

A Game of Thrones: The Board Game is divided in three phases: Westeros, Planning and Action phases.

This is by no means a flawless design. A Game of Thrones sometimes feels a bit like it's trying to do many things at a time. The game could certainly be streamlined and since it wasn’t it is a bit longer than it should be. Though FFG says 2-4 hours, I’ve played many games that lasted some good six hours and I've heard of eight-hour games elsewhere. Experienced crews will be done under three hours but that is still a lot for some.

I am also not a huge fan of the combat system. Though House cards infuse some flair on a somewhat Cartesian combat resolution system, I am not so sure a extremely small seven card deck that will only let you use every card once is the right answer. Players will count your cards and most times know in advance what you can play. That sort of defeats the purpose right?

Also, Wildlings attacks and its penalties and rewards are underwhelming to the bone. It makes way more sense just saving power tokens to bet on the influence track. And although FFG did try to address balancing issues, some Houses are still a lot more powerful than others.

Having said that this is my go to game with my group of friends and we've had countless evenings of amazing gameplay. What A Game of Thrones does best is just so good! They’ve designed a great balance between diplomacy and conflict, striking a chord to both players that like political games full of negotiation and those that just want to get into combat as much as possible.

The betting system plays marvellously while being so embedded with the theme reflecting the constant shifts of power in Westeros. Bluffing and deception never played better in an area control game like it does with these simple but efficient action tokens. The art is so much better than the previous game, House Cards are just beautiful, the board is a real looker and components are a lot better than average.

So, if you’re not phased off by a game that is somewhat long and a bit complex at first, and if player elimination or pseudo-elimination is not a no-go, this may be just a great game for you. Moreover, if you’re a big fan of the books or series (both!?) and you like strategic games this is a no brainer.

Just be watchful on who you’re going call for a round of A Game of Throne..... “Some old wounds never truly heal, and bleed again at the slightest word.” Have fun!