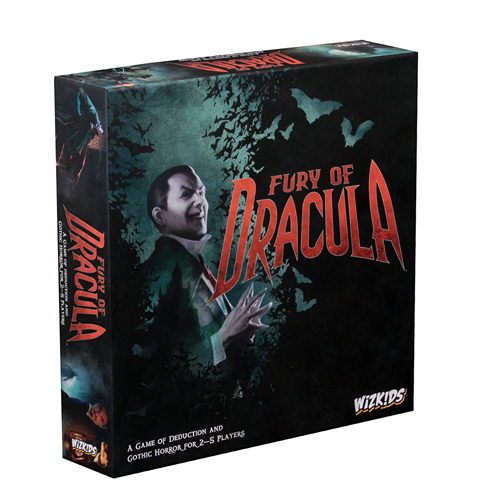 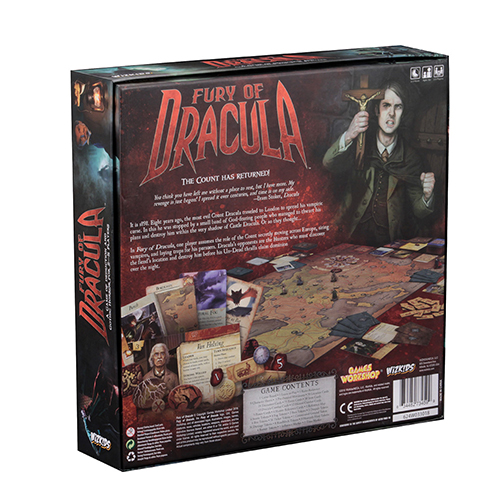 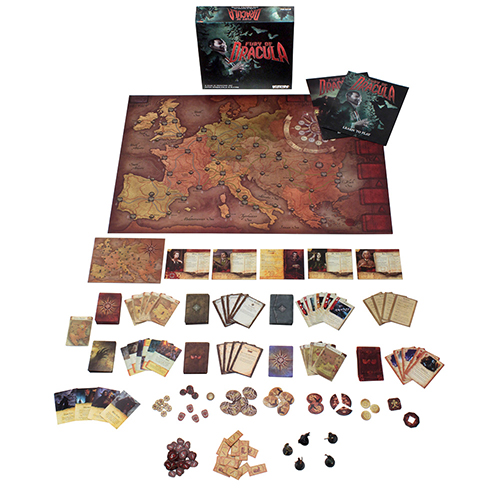 The most notorious vampire of all rises again in Fury of Dracula 4th Edition, a board game of deduction and gothic horror based on Bram Stoker’s classic novel with intuitive and thematic mechanisms.

In Fury of Dracula, one player is Count Dracula secretly traveling the European countries, turning humans into vampires with his gruesome bite, laying deadly traps for those hunting him, and leading the hunters on a wild goose-chase using hidden movement and deduction mechanisms.. The Count's opponents are the Hunters  trying to rid Europe of his influence, who must find the bloodthirsty villain and destroy him before his undead thralls claim the night as their own. The 4th edition of the classic hidden movement vampire hunt includes a new, improved rulebook, larger poker-sized cards, and fully, beautifully painted miniatures for Dracula and each of the hunters. Fury of Dracula is for 2-5 players, aged 12+, and plays in around 2-3 hours.

Rounds are broken into day and night, with hunters taking actions during both, while Dracula can act only at night. Combat is streamlined and decisive, and rumor tokens allow Dracula to mislead hunters and extend the terrible reach of his influence. Count Dracula triumphs if he advances his influence track to thirteen; if the hunters can defeat him before then, they save the continent of Europe and win the game.

“The last I saw of Count Dracula was his kissing his hand to me, with a red light of triumph in his eyes, and with a smile that Judas in hell might be proud of.”  Bram Stoker – Dracula

Fury of Dracula is a game of cat and mouse for two to five players that takes place all over 19th century Europe. The vampire, Count Dracula, is back from the (un)dead and a task force composed by his old acquaintances, is on his tracks to stop him from spreading his demonic influence across the continent.

The original game, first published in 1987, has undergone several revisions and improvements, and is here reviewed on his fourth reprint. Fury of Dracula is one of the most acclaimed “Hidden Movement” games, in which one player (Dracula) moves in secret on the map, eluding his opponents’ gaze, while the other players have to deduce his whereabouts and track him down.

However, every game of Fury of Dracula is much more than just that. 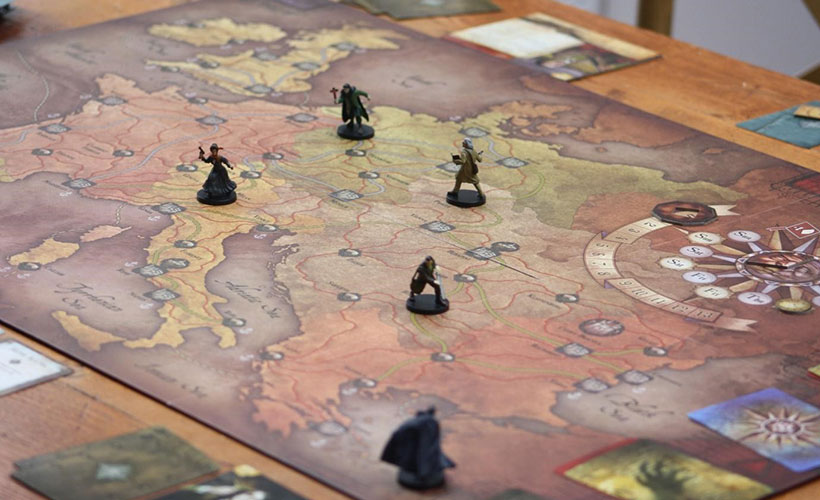 The player acting as Count Dracula uses a dedicated section of the board containing six location placeholders, aka the “Trail”, to keep track of his most recent movements. Dracula wins the game by travelling from city to city and planting his seeds of evil, to generate an offspring of vampires that will earn him points on his victory track.

Tricks up the count’s sleeves are many and varied, including special ability cards that can be used to damage the vampire hunters or escape from their grasp.

The other players take the role of a hunter of their choice, namely Mina Harker, the wealthy Lord Godalming, and doctors John Seward and Van Helsing. Each of these characters has different attributes and abilities, but all are associated by the impending desire to find and destroy the vampire, before he completes his nefarious goals. 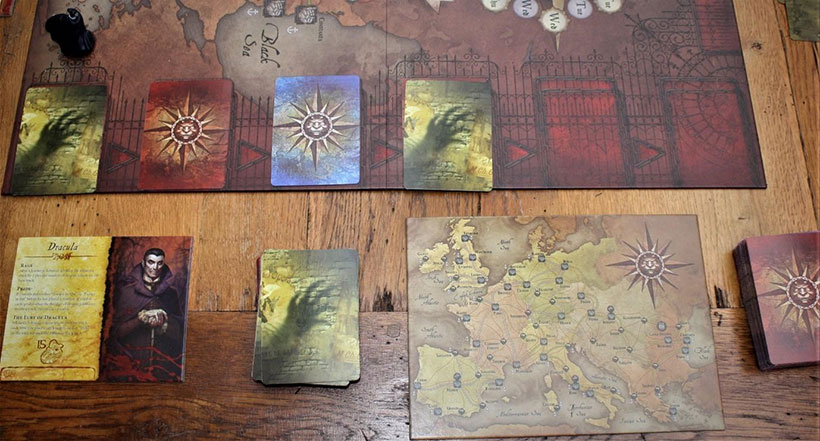 The core game mechanics in Fury of Dracula are relatively simple. Each turn starts by advancing the time marker to a new dusk or a new dawn, then the vampire hunters take turns performing one action of their choice, such as movement, in the hope to reveal a location on Dracula’s trail, or collection of resources, generally weapons or special actions cards, that would increase their odds of finding and beating Dracula.

Dracula only plays during the night phase of the game. He moves in secret by adding a new location card to his trail, on top of which he lays an ‘Encounter’ card. The latter is a manifestation of Dracula’s evil (bats, wolves or vampires, to name a few) that could either damage or impede any hunter on that location and earn him victory points when it slides off the end of the trail.

The game progresses in a relentless chase all over the continent until Dracula’s current location is discovered, and the game reaches a dramatic climax. One of the most notable differences between this and other hidden movement games, is in fact, the combat phase.

In order for the hunters to win, they not only have to correctly identify Dracula’s location on the map, but also fight him and wound him to the last of his (many) health points, to grant his long-awaited demise from the world. 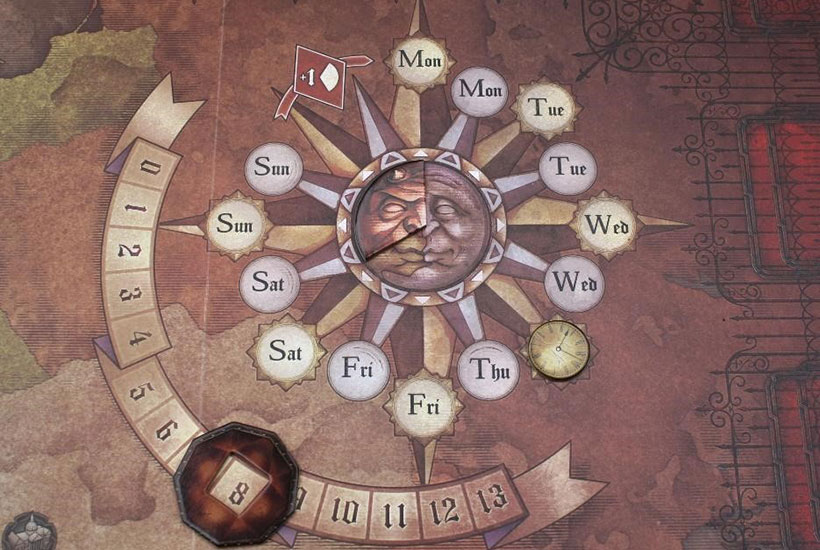 Combat in Fury of Dracula is a blast and it plays out with a quick card drafting “rock-papers-scissors” mechanic, with the hunters trying to gain a upper hand on the vampire and defeat him, or at least inflict as many damages as possible before the prince of darkness could transform into bat or mist form and vanish in the dead of the night. This alternation between movement planning on one hand and frenetic combat rounds on the other, offers a refreshing variety of pace, making the game both strategic and exciting.

Compared to more streamlined hidden movement games (Letters from Whitechapel and Scotland Yard), the heftier victory conditions for both the hunters and Dracula add richness and variety to the game, but also dramatically increases the game's complexity and playtime (2-3 hours, that could easily add up to another hour for less experienced player).

Although the core mechanic is not difficult to grasp, the large amount of action options and cards available to each player requires to follow a quite consistent number of specific rules, that are sometimes easy to overlook or forget. Fortunately, the essence of the game can be explained to new players in a few minutes and combat mechanics can be added as the game progresses, with no detriment to the experience.

Another strong point in Fury of Dracula is its beautiful theme. Every element in the game, starting from the wonderfully crafted game board and components, perfectly renders the Gothic horror atmosphere of the original Bram Stoker novel and contributes to immerse the players into it.

Even the rules and the mechanics themselves are very much tuned to convey the flavour of the source material, with Dracula gaining advantages during the night rounds due to his vampire nature, travelling in disguise by boat and carriage (unlike the hunters that can use railways) and having spies all over the continent (every communication between hunters at the table must be public). 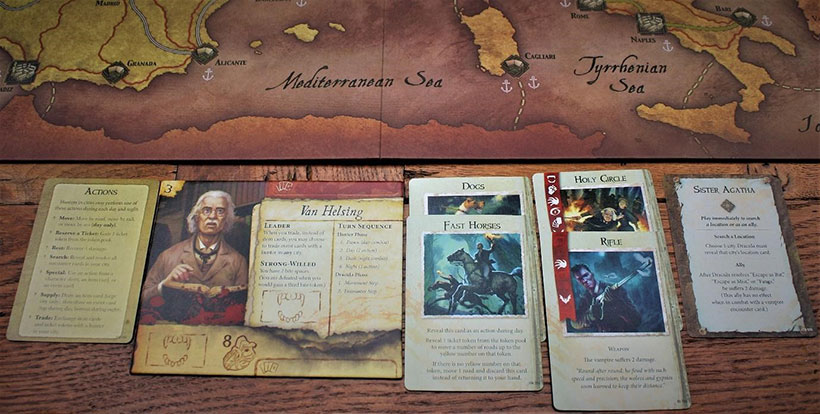 Final Thoughts on Fury of Dracula

I thoroughly recommend this game to players seeking a rewarding, medium-weight experience, that is both strategic and also retains a strong thematic element. The box is generous in quality and components, from the beautiful board, to the abundance and variety of cards, tokens and painted miniatures.

Although quite demanding in terms of playtime, the game is a lot of fun, particularly with more players at the table, and it’s not overly complicated to explain to newcomers. It also scales well even with only two, changing the game experience from a semi co-op to a duel. Every game of Fury of Dracula is different and offers tons of variety and replay-ability.