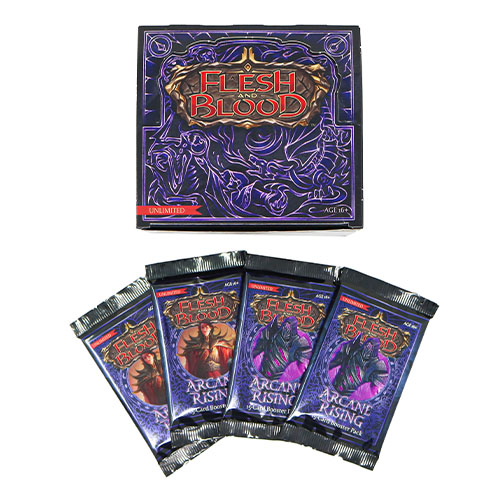 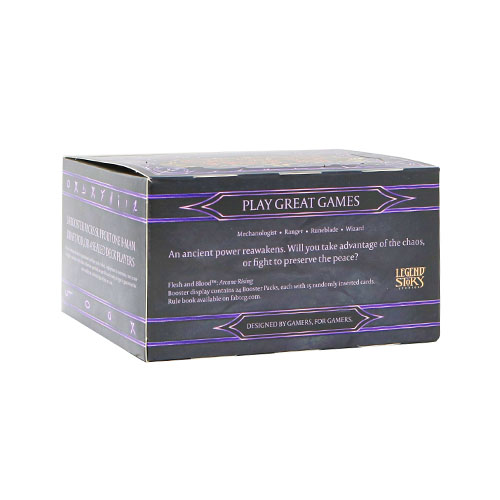 Arcane Rising is the second Flesh and Blood booster set, featuring spell-slinging wizards, twisted abominations, and exciting products of human ingenuity. Get ready for a tale of horror and desperation, as four new heroes stand fast against the rising darkness; this ain’t one for the faint of heart. This booster box includes 24 booster packs of Arcane Rising Unlimited. A boost…
Read More
Category Trading Card Games Tags Flesh and Blood TCG, Gold, Value For Money SKU ZBG-FAB2001U-BOX Availability Out of stock
Share this
86%

Arcane Rising is the second Flesh and Blood booster set, featuring spell-slinging wizards, twisted abominations, and exciting products of human ingenuity. Get ready for a tale of horror and desperation, as four new heroes stand fast against the rising darkness; this ain't one for the faint of heart.

Flesh and Blood is the hottest new TCG on the block. The game's system is completely different to everything else on the market, being designed around playing as your Hero. The name, "Flesh and Blood", was a reference to how the team at Legend Story Studios wanted it to be played. To go against the wave of online TCGs, they wanted it strictly to be played across from each other, or "in flesh and blood". Covid-19 had different plans, unfortunately. However, with reprints of all 4 sets coming in as the world reopens, now is the best time to journey into the nation of Rathe for the first time!

A Kingdom, Beset by War

Welcome to Rathe is the first set in Flesh and Blood, originally released in 2019. It launched with 226 cards, and the first 4 heroes in the game. These are: Bravo the Guardian, Dorinthea the Warrior, Katsu the Ninja and Rhinar the Brute. The heroes also have child forms, for the faster Blitz variant of the game.

Flesh and Blood is played by setting up your hero as a character - you need both weapons and equipment cards to play. Your deck is made up of abilities, and in order to cast attacks you have to "pitch" others to pay their cost. Some of the equipment and ability cards are universal, but others are for specific classes. For example, only Bravo can use the card Tectonic Plating, but any hero can use the card Fyendal's Spring Tunic. Other Guardian cards released down the line can also use Tectonic Plating, although at time of writing it is only Bravo.

Next up, Arcane Rising. This set introduces 4 brand new hero types, some of which were surprisingly missing from Welcome to Rathe. The only melee-like character in the entire set is Viserai, the Runeblade! The 3 other heroes are Dash the Mechanologist, Azalea the Ranger and Kano the Wizard. If you're thinking Dungeons and Dragons, you'd be right. Arcane Rising plays much more heavily into the weird and wacky than Welcome to Rathe did. This is most obvious with Viserai and Dash, who both combine elements from other decks!

Viserai is a Runeblade, an in-between of a mage and a swordsman. Taking sword and sorcery to a new level, he uses the brand new Arcane damage type heavily. Arcane damage has the ability to ignore normal defense, but in return can be shut down very easily by Arcane defences. Dash, on the other hand, feels like she's straight out of Kaladesh-era MTG! You better have some markers on you, because you're going to need to keep count of a lot of things on her.

Flesh and Blood's gameplay style really reminds me of classic fighting games, like Marvel vs Capcom and Guilty Gear. It takes a lot of work to get in, but once you're in you're doing a lot of damage very fast. Brutes can get in more often, but deal less damage, while Ninjas get in less but will throw more cards than most people can deal with. Warriors can almost guarantee an attack every turn, while Guardians spend turns powering up their next wallop.

The deckbuilding is where the game's skill ceiling really increases. Unlike other trading card games, there is no Energy or Land equivalent; You pay for abilities by sacrificing other abilities. This means you need to make sure your deck works well together. If you build your deck horrendously wrong, it's completely possible to never land a hit on a smart opponent. Luckily, the starter decks for each of the heroes (including Ira, another Ninja) are all pretty solid.

The Future of Flesh and Blood

The biggest issue with Flesh and Blood is, simply, the availability of some cards. Not all sets have had their major reprint yet, meaning Crucible of War cards are incredibly hard to come by. If you really want to play a Shapeshifter, that is (at the time of writing) priced at over $2,000. Legend Story Studios have, however, promised that a Crucible of War reprint is coming, and that more Shapeshifter cards will be printed in the future. Reprints in future sets are also looking likely, according to the team. The next Shapeshifter probably won't be the same character, but will come eventually!

Flesh and Blood should be able to trade blows with other second-tier TCGs in the west. These include Force of Will, Dragon Ball, Weiss Schwarz and Cardfight. The game's fantastic design of fighting heroes, instead of summoning creatures, really sets it apart. The support and ongoing love from the community bolsters it even further. It could even reach the level of Magic and Pokemon!