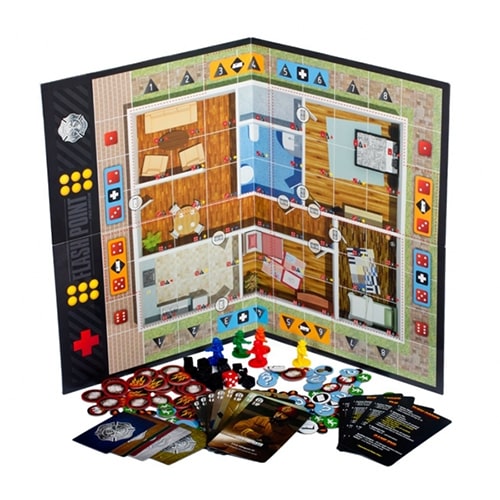 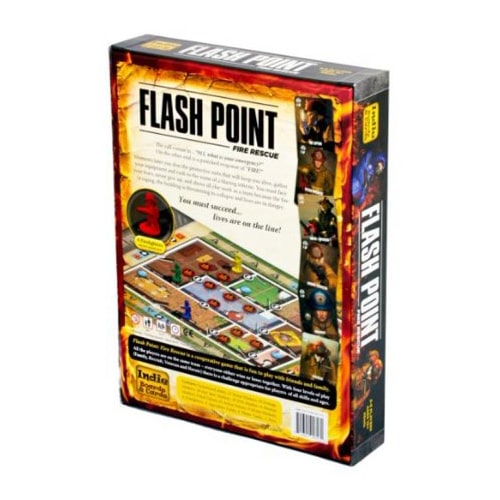 Flash Point Fire Rescue, from Indie Boards and Cards, is a thrilling game of fighting fire, rescuing victims and team work from the game designer Kevin Lanzing. Flash Point is a co-operative game where the players take on the rolls of firefighters attending the scene of a house fire; they need to fight the fire, rescue the occupants and ensure that all this is done before too many o…
Read More
Category Board Games Tags 9-11 Years, Dice Tower SKU ZBG-IBCFPF2 Availability 3+ in stock
Share
Share this
90%

Flash Point is a co-operative game where the players take on the rolls of firefighters attending the scene of a house fire; they need to fight the fire, rescue the occupants and ensure that all this is done before too many of the occupants have died or the house collapses.

Each round, each player has four action points to spend on their turn, to move, carry victims, get rid of hazardous materials, open and closing doors, extinguishing smoke and fires or maybe chopping their way through the walls driving the fire engine to another side of the house. Maybe even changing their roll or firing the Fire Engine deck gun.

All is not as easy as it sounds, once a player has used their four actions, the fire advances, a random space is rolled and smoke or fire will spread there, possibly explode spreading fire and damaging the building or even causing flash-overs knocking down the players and killing the victims.

Each player can take on the roll of a specific type of firefighter: The CAFS Firefighter who can extinguish fires without using action points, the Fire Captain who can use their action points to move other players around, the Rescue Specialist who can move farther and can chop through walls easier. Perhaps the players would prefer to play the Imaging Technician who can identify where the victims are, or the diver/operator who can use the fire engine much easier than others. What firefighting team would be complete without the Hazmat Technician who can dispose of hazardous materials easier than others, the Paramedic who can heal the victims and get them out of the fire faster or the extremely useful and versatile Generalist who has an extra action point.

The game ends with the players winning when seven people have been rescued, or they lose when four are lost or the building collapses by taking to much damage.

When we were looking for our next-step co-operative game after Forbidden Island, Pandemic seemed like the obvious choice, but fortunately we also quickly got the opportunity to try the less well known Flash Point: Fire Rescue and it has fast become a staple of our collection.

Flash Point: Fire Rescue is a co-operative game for 1-6 players from Indie Boards and Cards. The players take on the role of a team of firefighters trying to put out the fire in a house and rescue the people and animals trapped inside. You will be putting out fires, trying to control the risks of hazardous material, investigating points of interest and carrying casualties to the ambulance, all whilst trying to ensure that the house does not collapse due to too much damage caused by the fire.

Will your team galvanize together, think on their feet and keep the fire at bay, or will the dice rolls mimic the chaotic behavior of a real fire and cause the house to collapse before you’ve had the opportunity to rescue the people inside?

At the start of a game you roll the dice to generate a series of explosions that represent the state of the fire when you arrive. These explosions generate fire tokens, which hinder progress until extinguished, and structural damage cubes. Damage cubes create holes in walls making it easier for you, and the fire, to move about, but should you run out of the supply then the house falls down crushing everyone still inside.

Once you have placed explosions you also place a number of hazardous materials, which explode if they touch fire, and a number of points of interest tokens which are either people/animals you need to save, or blank tokens designed to waste your time! Each player then receives a role card giving them a unique ability to use throughout the game.

On every turn you will have a set number of action points depending on your role. With these you can move around, cut holes in walls, carry people to safety, extinguish fires, change your role, fire the deck gun on the fire engine or drive the ambulance/fire engine around the side of the house.

One of the most interesting things about Flash Point: Fire Rescue is that any action points you don’t use on one turn can be saved for your next, this allows you to take a breather in an area that isn’t on fire, rather than risk standing in a dangerous place just to use those last action points.

After a player has taken all their actions they roll the dice, these give you a grid co-ordinate in the house. Should this co-ordinate be empty then you fill it with smoke, should it have smoke in it then the smoke turns to fire and should there be fire in it then there is an explosion, causing fire to spread in four directions.

Fire tokens spread, turning all adjacent smoke tokens into fire tokens, combine this with hot spots, which make you roll additional times when you roll them, and the house fire can soon get out of hand. Ultimately if you manage to save enough people from the fire then you win the game, however the game is lost if the house falls down or if too many people die in the blaze.

Flash Point: Fire Rescue is a great implementation of what is now the classic co-op experience. The theme makes working as a team come so natural to players, though there is always that one person who questions why you can’t just put the fire out and go home. The different roles all have their own unique strengths, with some being of very limited use at certain parts of the game, so the ability to retire to the fire engine and swap your role for another firefighter is an ingenious solution so no player feels useless.

Flash Point: Fire Rescue is designed to encourage you to carefully manage the risks you take. Sure, you can run to that point of interest and find out if it’s a person, but if the fire spreads to them before your next turn you’ll just end up burning with them. I think this works well with the theme of a profession in which, by its very nature, you risk your life. A firefighter is no help if they run into an inferno and just become another body to save, but if they use the tools available to them to create a safe avenue then they can save lives, though perhaps not everyone.

There are some negatives. As with most dice games, sometimes the dice just hate you. There is variable difficulty and even a simplified family version, but ultimately the extra hazards aren’t a threat if you never roll them. Flash Point is great for small player counts where your turns come relatively fast, but at the higher player counts the wait between turns can be a little painful, it feels like your firefighter has completely lost any sense of urgency and is casually strolling around as the house burns and explodes around them.

For 2-4 players though, Flash Point: Fire Rescue is a wonderful game that really makes you feel like a hero!

Generally most logical moves are a good option. Like many co-operative games in this style, there is the opportunity for one player to try and take over and decide everyone’s move, but if everyone is conscious to avoid this ‘alpha-player’ scenario then all players should be able to make a big contribution, even in a first game. In addition, if playing with young experienced players, the base game even includes a family rule set with no special character abilities and few extra simplifications. For gamers this can be quite boring but it’s worth it to get everyone around the table familiar with the mechanics.

For more experienced players, there are a number of ways to make the game more challenging. There are three different ways to set up for different difficulty levels, typically with more starting explosions and more hot spots for harder difficulty. In addition, the board is double-sided, with one side normally causing more problems than the other due to its geometry. If you really love Flash Point: Fire Rescue, there’s even expansion maps which alter the difficulty, add extra rules and change-up your experience.

For me, the theme of Flash Point: Fire Rescue is universally appealing to all ages and all different types of gamers because it’s a real life scenario. The game mechanics mesh really well with the theme. With two players, our game experience never lasts longer than 45 minutes and it’s different every time. For a game where luck plays a big part it’s amazing how often we have a close game with highs and lows when we think we’re going to lose and then manage to squeak a victory.