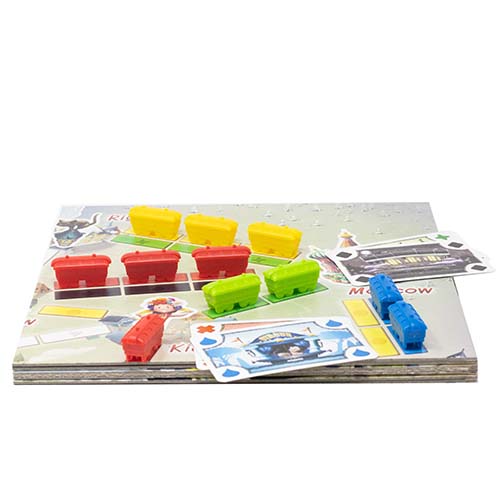 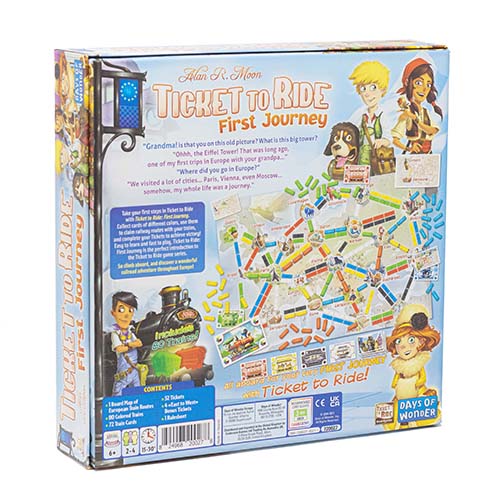 Ticket To Ride: First Journey (Europe) is a fun-filled adventure for younger train fans! Once again designed by Alan R. Moon, First Journey tweaks the much-loved Ticket To Ride to accommodate children aged six and up. If you’ve played the regular game, you’ll know what to expect! Players compete to try and build rail route on a map of Europe, linking cities. You’ll need to collect sets of same-coloured train cards to claim routes between cities. If you have the same quantity of matching cards that match a route, you claim it and place down your trains! The big aim is to complete ‘tickets’, which require you to connect two cities across Europe. Ticket To Ride: First Journey (Europe) takes its younger audience into mind with some rule changes. This game isn’t about earning the most points (like the original). Instead, the winner is the first player to complete six tickets. Players start with twenty trains – fewer than in regular Ticket To Ride – so it’s a quicker game (for those with, ahem, shorter attention spans!). Another way someone can win is if they place down all twenty of their trains. If they do, then the player who’s completed the most tickets at that time wins! The routes on this map are between one to three trains in length, so set collection is a little kinder. Also, since there’s no points, players don’t get penalised for not completing tickets. In fact, if both of your tickets get blocked, First Journey allows players to spend their turn swapping the dud tickets for two new ones. The colours on the board pop and there’s cute artwork for each city, which will delight the little ones. Publisher Days of Wonder have done it again! First Journey (Europe) goes to show that there’s a Ticket To Ride game out there for everyone. Player Count: 2-4 Players Time: 15-30 minutes Age: 6+

Ticket to Ride: First Journey brings the massively popular railroad game to the younger generation, in a scaled down version suitable for the younger audience.

Inside this Days of Wonder game you will find a simplified, child-friendly version of Ticket to Ride. The mechanics and the theme from the original game remain rooted in this edition.

Each turn, a player can either pick up two train cards from the pile, or discard train cards of the same colour to claim a route - thus allowing them to complete the tickets that they have in their hand. If they complete a ticket, they then draw another ticket and try to complete the route shown. There is also a special cross-continent card that can be claimed for connecting a city from one side of the map, to a city of the other side!

Instead of scoring like the original games, in Ticket to Ride: First Journey it's the first person to claim six tickets that is declared the winner.

This game will have your children racing to build as many railroads across Europe as possible, all while keeping them engaged and entertained. While this game is aimed at children, adults will also enjoy playing this with their children as many of the concepts remain the same as in the original Ticket to Ride games.

Quicker gameplay also ensures that your children will remain engaged and enjoy the entirety of the game. They'll also want to come back and play it time and time again.

Ticket to Ride: First Journey is a fantastic game to introduce your children to the world of board games. It's simple theme and gameplay allows all abilities to enjoy a scaled-down version of a much-loved classic.

Ticket To Ride First Journey, All Aboard!

What child doesn’t love a train journey?  Ticket to Ride has been a huge success; it’s easy to get hold of and is often recommended as a ‘gateway’ game.  So, does Ticket to Ride First Journey succeed in lighting the fire in the younger generation too?

The components will be recognisable to any Ticket to Ride fan, they have just been made child friendly in the Ticket to Ride First Journey editions.  The trains are a little bigger and spares are included to cover any getting lost - something we’ve already had happen.  Cards are linen finished and the images are very similar to the standard game but with a more child-friendly aesthetic.  Colours are clear and symbols are used on the cards to ensure they’re accessible to anyone who may be colour blind. Cities on both the map board and the ticket cards have a caricature style image of a local landmark as well as the name so they can be easily found by the younger players.  There’s even a ‘golden ticket’ card included as a prize for the winner.  Overall the components are first-class as with the other games in the range and fit for purpose too. Gameplay Ticket to Ride First Journey keeps much of the gameplay of the game it’s based on, simply streamlined for the child ticket holders.  Starting the game with a hand of four trains and two tickets, on your turn you can either take two more trains from the top of the deck or claim a route on the map by discarding the matching train cards and placing your trains on the route. When you complete a ticket (claiming the routes between the two stations shown on the ticket), reveal it and draw a new ticket.  The longest route is replaced with East to West cards, that count as a completed ticket and are available to all players.  The first to complete six tickets wins.

There is still strategy to be had, but perhaps the luck is increased just enough to give the kids a chance to keep pace – in fact in our last game for this review, our seven year old son won – and it was close, his mum was going to win herself on her next turn too.  The update to the components, artwork and board all work very well.  Playtime is appropriate for the attention span of the intended age range and pace of the turn means that it’ll be back to the children’s turn before they know it.

More Orient Express than freight train, Ticket to Ride First Journey plays smoothly and delicately takes the main aspects of the Ticket to Ride franchise and polishes it for a younger generation.  A 1st class addition to your family games collection!

Final thoughts from a 7-year-old…

"I could play it right up until bedtime."