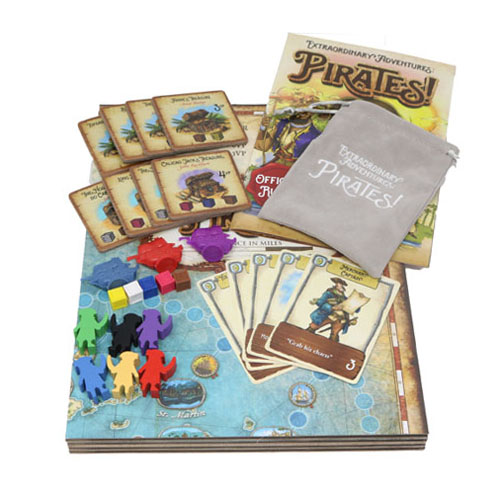 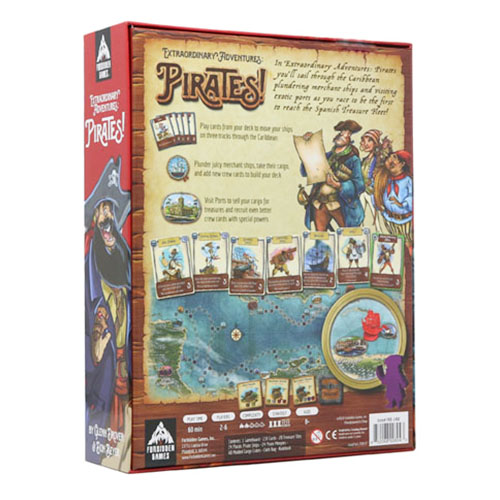 While playing Extraordinary Voyages: Pirates, you become a pirate captain sailing three ships through the Caribbean in search of rich merchants to plunder and friendly ports in which to trade your booty for riches. In more detail, you have one ship on each of the three “tracks”, i.e., pathways through the Caribbean Sea. On each turn, you play three cards from your hand t…
Read More
Category Board Games Tags Extraordinary Adventures, Glenn Drover, Sale, Value For Money SKU ZBG-FRB1400 Availability 3+ in stock
Share
Share this
85%

While playing Extraordinary Voyages: Pirates, you become a pirate captain sailing three ships through the Caribbean in search of rich merchants to plunder and friendly ports in which to trade your booty for riches.

In more detail, you have one ship on each of the three "tracks", i.e., pathways through the Caribbean Sea. On each turn, you play three cards from your hand to move your ships. Your cards have a basic movement number, and often a secondary action. You may use one or the other to move your ships down the track or gain special advantages.

Each of the three tracks winds through the Caribbean islands toward your ultimate goal: the Spanish Treasure Galleon at Trinidad. Along the way, there will be detours that lead to merchant ships that may be plundered, and towns that may be visited to cash in your plunder for treasure. Plundering merchant ships and visiting towns also allows you to recruit more crewmen (cards) for your crew (deck). The better your deck is, the faster that your ships are able to move, so deciding when to take detours for plunder and recruiting and when to sail on toward your ultimate goal is an important decision that every pirate captain must make.

The first pirate captain to reach the Treasure Galleon at the end of any track ends the game. Each pirate ship scores points based on what place they finished on each track, as well as for the treasures earned by selling plunder. The richest captain goes down in history as the Pirate King!

Extraordinary Adventures: Pirates is a deck building game. It's designed by Glenn Drover (designer of Age of Empires III and Raccoon Tycoon). And published by Forbidden games. The game plays two –six players and lasts just over an hour, when familiar with the game.

Players take control of three pirate ships, racing through the Caribbean, along three different tracks towards Trinidad. Ships can plunder Merchant ships and visit ports along the way, each helping to improve a player’s deck, as well as providing additional benefits. Collecting treasure and being first in the race to Trinidad on each track, can be as important as each other, so which route will you take to be the best Pirate in the Caribbean?

Each player has a starting deck of ten cards and draws five to create the starting hand. On a turn, a player chooses three of five cards to play. Each card shows a number of spaces a boat can move, and possibly a special action that can be taken instead.

Treasure Tiles are a source of victory points and each tile shows a combination of cargo that needs to be traded in to obtain the tile. They range from two to five cargo cubes, with points being awarded based on the number.

Merchant and Port cards serve to improve the quality of a player’s deck. So it’s advantageous to detour from the main track to obtain these. At the end of the turn, the cards used are discarded and the player draws back up to five cards. Once a player is unable to draw any more cards, then their discard deck is shuffled and, along with all the newly gained Merchant and Port cards, becomes the active deck again.

The game ends immediately once one ship arrives at Trinidad. Players add up the victory points gained from treasure tiles and treasure cards (a type of Merchant card), pirates rescued and captured, and their position on each of the three tracks. The number of points awarded to the ship in first, on each track depends on the number of players, with the most points going to the leader and the ship in last position getting zero. The winner is the player with the most points.

Being in the lead on each track will certainly bring in the most points for race position. However this will certainly not be enough to win the game. Treasure tiles can be collected quickly and easily. Even though ships must deviate from the main track for several turns. The points awarded for some of the treasure tiles easily covers the difference between points awarded for first and second. Gaining the Merchant and Port cards will also improve a ship’s ability to travel across the tracks. But how much do you deviate from the main track? Too much, and you will fall too far behind the other ships. This is what makes the game exciting; do you hold your position, or will you plunder the merchant ship for cargo?

To encourage a player to head to the ports, there are pirates placed which can be rescued, if they are your colour, or captured, if they are an opponent’s colour. If a pirate is rescued at the same time as trading in cargo for Treasure, then that treasure value is doubled. This now gives the players further incentive to be ahead of other players on the track which has most of their pirates, but you’ll need to have already collected the right cargo to trade in to benefit from the rescue.

Extraordinary Adventures: Pirates, is a fairly light deck-building game, yet gives players a huge amount of strategic choices. Being first on one track, and last on the other two is not going to be enough to win the game, but how much do you risk your lead to get ahead on others? Is it worth being middle of the pack on each track, and ensuring you’ve plundered and traded all the way? These choices give the game lots of replayability, as you’ll want to try a different approach next time.

A slight disappointment was that it was difficult to determine which space each ship was on. This is due to the spaces on the board being very close together. Especially with ships being double the size of the space. The component quality is very good though with the cargo cubes being plastic. The pirate ships are plastic, and the board is nice and large. The Pirates that come with the base game are wooden however, which is inconsistent with the rest of the game, unless you purchase the additional pirate minis.

One other aspect of the game which proved difficult was determining the colour of the cargo cubes on the Treasure Tiles. It isn’t the easiest to distinguish the colours, and it was a real shame considering the actual cargo cubes are so clear in colour and well produced.

I am personally a huge fan of deck-builder games and this game will definitely form part of my collection. It is a game that will be understood, and enjoyed, by less experienced gamers. Whilst being a solid game for people who like more depth and strategy.