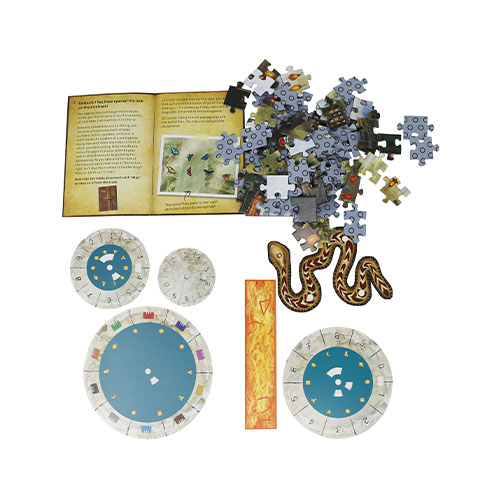 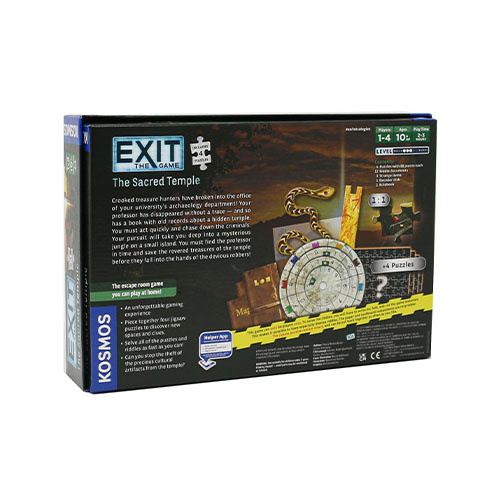 you could earn 1798 victory points

you could earn 1798 victory points

In EXIT: The Sacred Temple, you are racing through the jungle on a small island in the Indian Ocean, trying to save the professor and find the Sacred Temple before the treasure hunters do. Only this time it’s different because there are riddles within riddles hidden within puzzles. Like other EXITs before it, this game has no game board! But it also has no cards; instead, in this …
Read More
Category Board Games Tags Best Sellers, Companion App, Escape Room Games, EXIT, EXIT Puzzles SKU Z-THKO-692877 Availability 3+ in stock
Share
Share this
73%

In EXIT: The Sacred Temple, you are racing through the jungle on a small island in the Indian Ocean, trying to save the professor and find the Sacred Temple before the treasure hunters do.

Only this time it’s different because there are riddles within riddles hidden within puzzles. Like other EXITs before it, this game has no game board! But it also has no cards; instead, in this new addition to the EXIT series, there are four puzzles, which you will find during play and assemble one section at a time, one puzzle after another. Each puzzle creates an image that will show you what you need to find in the game and what each room looks like.

At the start of the game, all you have available to you are the puzzle bag and the decoder disk. But there are also strange items to be found within the game that may be used to help solve the riddles found in each of the puzzles.

The game ends when you have solved the last riddle and saved the Professor and the Temple!

Kosmos games have a huge range of Exit games. These are “escape rooms” in a box. Any number of players can work together to crack clues and work out fiendish riddles to solve the puzzles inside. The games are usually a single play-through experience. The question we need to answer is how does the sacred secret temple compare with other titles in the range. About nine months ago my family and I battled to escape The Forgotten Island. This review will explain what to expect [without spoilers] but hopefully, fire up your inner “Indiana Jones”.

In Exit: The Sacred Temple you take the role of an archaeology student. Your professor has disappeared, along with many of his notes and documents relating to an old hidden temple. It appears criminals are also chasing the ancient artefacts, so you have a race on your hands to save your professor and get to the treasures. Otherwise, they may fall into the hands of the robbers and you need to beat them to the gold.

Without giving any information away, Kosmos has packed a series of ten puzzles and challenges into this box, along with four jigsaw puzzles. These jigsaws are needed and the images used to decipher clues. The story assumes you know nothing about treasure hunting, which is probably true as a junior archaeology student. There is plenty of text to explain what challenges lie ahead. The tests need to be completed in series, each unlocking the next clue.

Each puzzle is named according to the challenge faced, for example; opening the briefcase or opening the temple site. The solution for each puzzle is a three-digit number. The game provides a decoder dial. This enables you to enter the numbers for each challenge and on the reverse to see whether you have solved that clue. At the same time, this gives a set of three symbols. These are used to select the next challenge that you need to solve.

There are other components in the box. To solve the riddles these may need to be folded, cut, written on and used. The entire components and box are recyclable, but the four jigsaw puzzles can be reused. Although the puzzles are only 88 pieces each, these have to be completed without any idea what the finished image will depict.

Thoughts about Exit: The Sacred Temple

When I first picked up the box, I was struck by the weight of this mid-sized game. It contains four jigsaws, along with all the components needed. This is not a lightweight game. Similarly, the box states a three out of five difficulty level. It is suitable for players aged 10 years and older. A typical game will take two to three hours to complete. The box art shows the sun casting its morning light on an ancient goddess who looks out over a dense jungle with mountains beyond. This sets the scene perfectly, transporting the players into the mysteries of the Far East.

Each jigsaw puzzle is a depiction of the scene that awaits any would-be explorer. The cardboard pieces fit well. The printing is clear. It needs to be crisp as these puzzles must be examined closely for the clues of each challenge. Certainly, 10-year-old children could help piece the jigsaws together. Some of the riddles and challenges will need adult help, or certainly require some lateral thought. Any number of players can enjoy this game. Solving the puzzles is best done by bouncing ideas off each other.

We found that my wife and daughter were brilliant at some of the riddles and my sons were much better at other elements of the game. Like any expedition, success depends on using each player’s strengths and being prepared to listen to other’s ideas to solve the puzzles. Kosmos estimates that the game should take two or three hours to run. If played in one setting this is probably correct. The physical act of creating the four jigsaws [without knowing the final image] is challenging in itself.

The Temple Is Sacred

As with other Exit games, we have found the game plays in a similar way to watching the scenes of a play. The four jigsaws divide the game into four acts. Knowledge of the earlier plot is helpful but does not suffer if you forget a few points during an ice cream break! As a family, where we rarely have two or three spare hours together, we found using each “act” enabled us to enjoy Exit: The Sacred Temple over a number of days.

Each 45 minute scene was sufficiently challenging and fun, yet it did not overstay its welcome. – we just left the jigsaws set up for a few days and kept dipping into the riddles. After dinner, around the dining room table, we would progress our quest through a few more challenges. The puzzles and riddles are diverse. At a number of points where we did solve a riddle, we sat back and all said “now that was clever”. It was as if there was a puzzle in a puzzle…. but I will say no more!

People talk about a games replayability and value for money. Although this is a simple, single-play through, the beauty of this game is that it will play out over many days. This is like a legacy game, yet cheaper. The pleasant puzzles are varied but all require observation and lateral thought. They require patience and for some, trial and error would be helpful. Some riddles and elements of this game will not appeal to those who want instant gratification. That said, we found the harder the challenge, the greater the sense of achievement once the riddle was solved.

Having played The Sacred Temple and The Forgotten Island, which do we prefer? The consensus is that The Sacred Temple has been a much more enjoyable experience. Firstly, the jigsaw element to the challenge meant we were studying the pictures much more closely. Everyone could enjoy piecing these puzzles together. Secondly, the linear nature of the riddles allows you to enjoy the story and theme.

You get a true sense of exploring the jungle, overcoming obstacles and finding the lost temple. The Forgotten Island challenges could be completed in parallel, perhaps reflecting the ability to wander around the island looking for clues to allow you to escape. Finally, the riddles themselves on the way to The Sacred Temple seemed to be more understandable. Both have a three out of five difficulty. Perhaps we were a little more attuned to what was required, but it seems as though Kosmos have improved and tightened up the quality of the challenges. This is not to say that they are easy, however, there is an understandable logic which meant we rarely needed any clues or hints.

As with all Exit puzzles, there may come a point where you reach a brick wall. The ten challenges will offer a series of hints, each providing more information to help you to solve the riddle. The final clue almost gives you the answer on a plate. Your final progress is calculated according to the time spent and number of hints required. We managed to solve the puzzles and rescue the professor in 130 minutes and used one hint. This scored us seven out of ten, or probably a B+ is we were being graded as students! Not bad for amateurs.

Like many cooperative games, this is a challenge against the game itself. But is it a game? To consider it a board game would be an injustice. This is a gaming experience. The Exit games series allow a family or group of friends to have an escape room experience in the comfort of home. My eldest children who are University students really enjoyed these riddles and could see their friends playing through one of the Exit games during an evening. For us, as a family, we have preferred using the game as a series of challenges to be solved each day. This has allowed us to extend the fun. It has caused some head-scratching but most of all encouraged plenty of discussions.

As Exit games go, this seems to be a solid family-friendly escape room experience. We would certainly recommend it as a way to keep the whole family entertained for a couple of hours, but it offers the versatility of being played out over a number of days to extend the enjoyment.