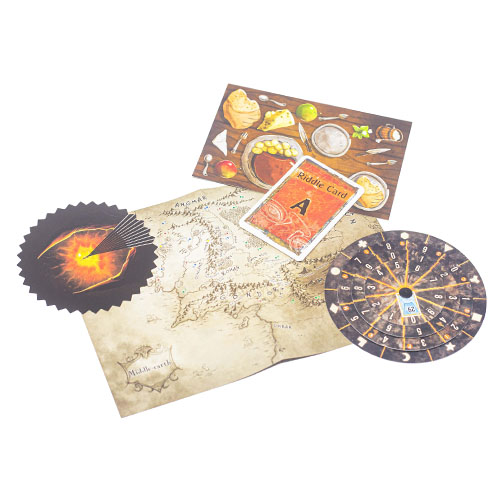 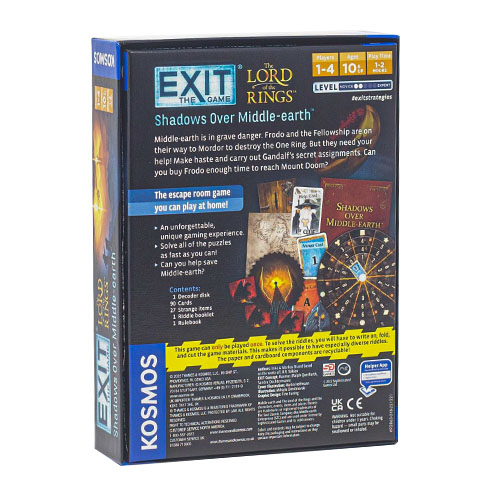 you could earn 1219 victory points

you could earn 1219 victory points

Hurry up, hobbits! A threat grows in the land of Mordor where the shadows loom. Frodo and his companions have set out to save Middle-earth, and the fate of the free world is now in their hands — and in the hands of the players, because the companions need help! The mighty wizard Gandalf has sent the players on a crucial mission. They must embark on an adventure and fulfil his assi…
Read More
Category Board Games Tags Companion App, Editor's Choice, Escape Room Games, New Releases SKU Z-THKO-692683 Availability 3+ in stock
Share
Share this
81%

Hurry up, hobbits! A threat grows in the land of Mordor where the shadows loom. Frodo and his companions have set out to save Middle-earth, and the fate of the free world is now in their hands — and in the hands of the players, because the companions need help!

The mighty wizard Gandalf has sent the players on a crucial mission. They must embark on an adventure and fulfil his assignments, for otherwise all hope dies. Together, players visit the locations from J.R.R. Tolkien's "The Lord of the Rings", solve tricky magic puzzles, and support the companions against Nazgul, orcs, and other dark figures.

Exit: The Game is a co-op game where you and your team have to work against the clock to try and decipher riddles.

Escape Rooms are taking the world by storm right now. They’re a ‘locked room’ scenario where you have to work together as a team to unravel clever, subtle clues that are spread around a room that move you ever closer to figuring out how to get out – and there’s always a time limit. Design duo Inka and Markus Brand have teamed up with KOSMOS to create Exit, a series of fiendishly thinky escape rooms… Albeit, in a card game format. You can play this one in your living room (but there’s no need to physically shut all the doors)!

The Exit series of games come with a range of difficulty. One being easy, five being very hard.

Please don't worry as this is a completely puzzle spoiler-free review. Instead, it will focus on the experience of playing EXIT: The Lord of The Rings - Shadows Over Middle-earth as an old hand Exit player and someone new to the series.

One Game to Rule Them All

I have been enjoying the Exit games for just over a year and have had some of my favourite gaming moments whilst playing. Last year's Advent Calender was a particular highlight and I looked forward to puzzling my way through all 24 days much more than just getting a little chocolate every day. I have tried other 'Escape Room' games but I find the Exit series offers the best puzzling experience.

To anyone new to the series, hopefully, the licencing of Lord of the Rings will bring new players in, these games are essentially escape rooms in a box which can only be played once and then recycled (as all of the contents are either paper or cardboard). The games normally have a great theme and story which ties all of the puzzles together ranging from a haunted house to an aeroplane emergency.

If playing an Exit game for the first time it is important to look at the difficulty level on the box. I would always recommend new players take the easiest (level 2) games first. Even at this difficulty the game still offers a challenge and can take anywhere from 1 to 2 hours to complete. Don't worry about getting stuck as the games include 2 hints per puzzle and a solution if you really can't find the answer.

Not All Those Who Wander are Lost

I was slightly apprehensive when starting EXIT: The Lord of The Rings - Shadows Over Middle-earth as I worried how they would treat the beloved licence. I did not need to worry at all as the writing is brilliant and I felt like I was transported into Middle-earth.

The story closely follows the plot of all three books/movies but cleverly puts you in the shoes of unnamed hobbits who have been asked by Gandalf to help Frodo and the gang in their quest. You will see some of the key moments and meet some of the important people whilst the puzzles make you feel like you are part of the epic journey.

The puzzles mostly felt like new additions to the Exit series or at least like variations on previously seen puzzles. I don't mind admitting we got stuck a few times and were all scratching our heads until that magical lightbulb moment.

Like all Exit games you can play solo but I would always recommend at least 2 players as someone else will think of solutions you yourself wouldn't necessarily have thought of. What you should not do is play with a large group as the puzzles can be quite small and require very close examination which can result in the other players in the group feeling left out.

Like I previously said the licence has been treated with the respect it deserves. The puzzles are clever and make you think. The components are generally good although one of the puzzles required the booklet to be completely flat but it went across two pages so it bulged up in the middle causing some frustration.

"Is this Exit game suitable for someone with no experience with the series?", that is the question that has plagued me since finishing it. I would say yes but with a proviso that the players have an open mind and refer to the hints and even the solutions if they get stuck. My experience with previous games in the series definitely helped me to see some of the puzzles for what they were and I worry that new players will be left confused and maybe disappointed if they have to seek help to solve the problems.

More please, I want Star Wars, Indiana Jones, Aliens, Harry Potter, Matrix, Back to the Future, and even the Jaws licence to be turned into an Exit game. If the writing is this good and sticks to the movie's important plot lines and characters I would be in escape room heaven. I really hope this licence brings in new players to the series.

I enjoyed my time with EXIT: The Lord of The Rings - Shadows Over Middle-earth and I would recommend it to fans of the series or the Lord of the Rings.