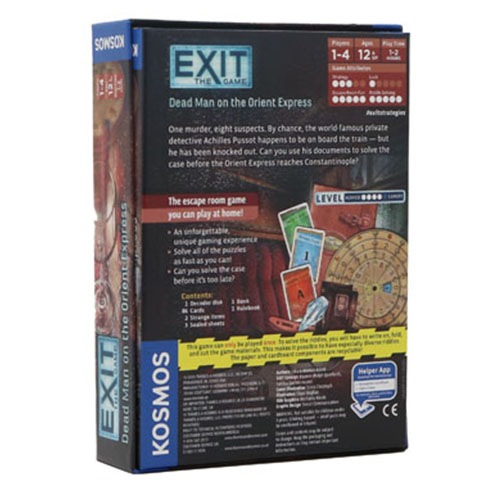 you could earn 1029 victory points

you could earn 1029 victory points

EXIT: The Game – Dead Man on the Orient Express is part of the third season of EXIT games. This very popular series of escape room games continues to deliver a huge variety of puzzles, bringing the escape room experience to your home in a small box. With an innovative cipher system, the EXIT game series asks you to bring just a pen, some scissors and some paper to the table. Using…
Read More
Category Board Games Tags Best Sellers, EXIT, Inka Brand, Markus Brand, Thames & Kosmos, Value For Money SKU ZBG-694029 Availability 5+ in stock
Share
Share this
90%

EXIT: The Game – Dead Man on the Orient Express is part of the third season of EXIT games. This very popular series of escape room games continues to deliver a huge variety of puzzles, bringing the escape room experience to your home in a small box.

With an innovative cipher system, the EXIT game series asks you to bring just a pen, some scissors and some paper to the table. Using a couple of decks of cards and a booklet of initial information, you’ll be led through a number of different puzzles. Unlike any of the previous games in the series, Dead Man on the Orient Express delivers a really strong story in addition to the brain teasers. Everything you learn during the game will be pieced together into a final murder mystery, providing a really satisfying ending with some great deduction elements.

Dead Man on the Orient Express provides a challenge for you and up to three other players and is rated as ‘hard’ – a medium difficulty amongst the other EXIT games. It’s definitely a great entry point into the series, delivering a great experience that would appeal to fans of escape rooms or murder mystery evenings.

The EXIT game series are escape room games from KOSMOS, that won the Kennerspiel des Jahres (expert game of the year award) in 2017. The games have been released in sets of three, and EXIT: The Game – Dead Man on the Orient Express is part of the third ‘batch’ of games. We’ve played every game so far and have been amazed by the ingenious ideas and shear variety of puzzles that the designers, Inka and Marcus Brand, have brought to the table.

The EXIT Games can only be played once, and unless you’re extremely careful, they are disposable – with many aspects of the puzzles requiring you to cut up or fold components. There can be a lot of pressure to make sure you enjoy your experience, and we’ve had a mixture of results from playing through the six games so far – a few being very enjoyable and others resulting in frustration as we found the puzzles very challenging. EXIT: The Game – Dead Man on the Orient Express indicates on the box that it is an expert level game, so we expected to be baffled, but actually found that this one really suited us.

At the start of the game you open the box to be presented with a short rules manual, a booklet full of clues for your adventure, a cipher disc and a deck of cards. On top of this you will need a pencil and preferably some paper and scissors, along with a stop clock of some kind.

At the start of the game all you have access to is the booklet and the cipher. Glancing through the booklet you will see many a puzzle, but also a few locations that you have access to. The first riddle card in the game is printed on one of these pictures (it’s super obvious so don’t worry about me spoiling anything!). You can then find this riddle card from the deck and try to solve the related riddle.

90% of the puzzles in the game simply require a three digit code which is put into the cipher disc. This will guide you to an answer card, should the answer be correct then the game will progress, adding more riddle cards and locations until the final puzzle is completed.

Should you get well and truly stuck then you can rely on the hint deck, every riddle has a related set of three cards. The first typically gives you clues of what components you need for the puzzle (in case you are barking up the wrong tree), the second a clue on how to actually do it, while the third spells out the answer completely. At the end of the game you will be ranked based on time taken and number of clues used.

Dead Man on the Orient Express is the seventh Exit game that I’ve played now, and it stands out as one of my favourites. The puzzles felt the right level of difficulty to me and we only needed a couple of clues to nudge us in the right direction over the course of the game. One thing that helped on this front was that the game almost only ever gave us clues for the present puzzle, rather than a more random distribution of information, like in previous Exit games. This does result in a fairly linear experience, but the reality is that all Exit games have been such, it’s very rare that there are two puzzles that can be done at the same time, so at least this way we weren’t wasting time trying!

The puzzles all had a unique flair to them and you find yourself finding secrets hidden in plain sight in some of the most unexpected places. Honestly, by game seven I thought they would have run out of places to hide clues but they caught me out once again! Combine the excellent puzzles with a story line that’s lifted straight out of a classic novel and a final puzzle that pulls everything together and you have yourself a great escape room game!

I love how EXIT: The Game – Dead Man on the Orient Express tried to do something different compared to any of the other EXIT games we’ve played. The game had a definite story arc, with different areas unlocking as we progressed, all culminating in a final puzzle, which was to solve the murder mystery based on the clues collected throughout the game.

This story, and the more linear nature of the puzzles, mitigated some of the frustrations we had with previous EXIT games where we were unsure if we had all the clues to solve a puzzle. Here we were solving one puzzle at a time, which is good when you’re playing with two players, but perhaps slightly more difficult with more players around the table. We found most of the puzzles a little easier than we have in some previous games and this gave us the sense of satisfaction we are looking for when we play any ‘escape room in a box’ games.

EXIT: The Game – Dead Man on the Orient Express is probably my favourite and most memorable EXIT game so far, and it’s definitely one I’ll be recommending to friends who I think would like to try out the series.