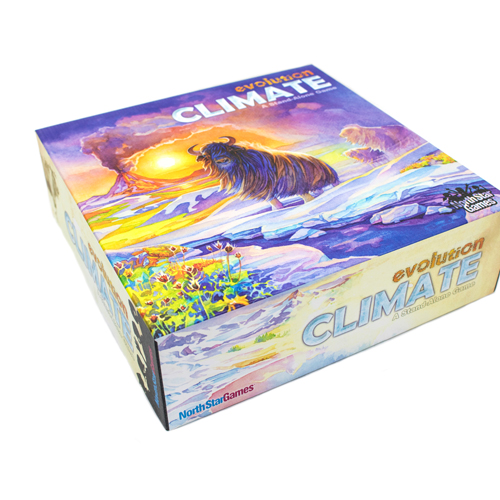 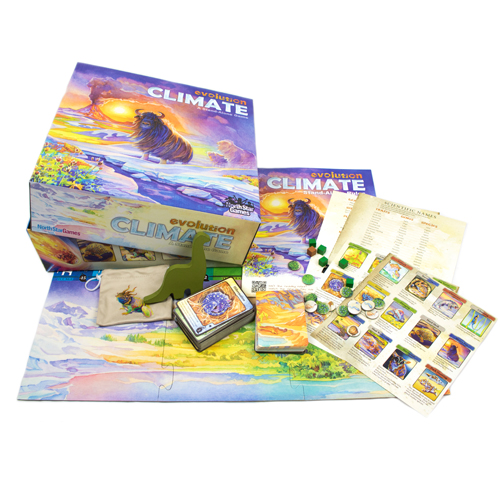 In Evolution: Climate, players adapt their species in a dynamic ecosystem where food is scarce, predators lurk, and the climate can swing between scorching hot and icy cold. Traits like a Hard Shell and Horns can protect your species from Carnivores while a Long Neck will help them get food that others cannot reach. Heavy Fur and Migratory can protect your species from the cold whil…
Read More
Category Board Games Tags Dominic Crapuchettes, North Star Games SKU ZBG-NSG520 Availability 3+ in stock
Share
Share this
90%

Evolution: Climate is a standalone game that introduces climate into the Evolution game system.

In Evolution: Climate, players adapt their species in a dynamic ecosystem where food is scarce, predators lurk, and the climate can swing between scorching hot and icy cold. Traits like a Hard Shell and Horns can protect your species from Carnivores while a Long Neck will help them get food that others cannot reach. Heavy Fur and Migratory can protect your species from the cold while being Nocturnal or Burrowing will provide protection from the cruel desert sun. With over 200,000 ways to evolve your species, every game evolves into a different adventure.

Evolution: Climate is a development of the game Evolution, introducing climate-driven factors into play.  It takes what is a good game, dealing with the threat of starvation and carnivores, and adds in climate as a global factor - greatly increasing the vividness of the theme and adding additional layers of strategy, making the game far more dynamic.

Players take a species, adapt it by adding traits like a hard shell, heavy fur or long neck.  These may help gain food, offer protection from carnivores or protection from the cold. One player may have a species that is herbivore and horned, another has a carnivore that may prey on the herbivore.

How well these species do, whether they thrive or not, depends on their food supply and on how well adapted or not they are to the climate, which is a global factor impacting every creature in play.

In part, the play is the same as Evolution.  Every player takes a hand of cards, each of which can add a trait, boost population or increase size.  There is no such thing as a useless hand or card.  The other part to the gameplay is feeding, food can be found at the watering hole, but there is a limited supply, hence creatures will gain traits that aid in obtaining that food, and others will become carnivorous.

Carnivorous creatures do not take food from the watering hole, instead, they eat other creatures, usually ones being played by the other players. So the prey develops more traits as a defence or quickly dies out. The climate adds to the challenge, if the climate gets warmer there is more food, but if it gets really hot food can become in short supply and large creatures struggle.

Similarly, small creatures can do better in cold climates, though food will likely be in shorter supply.

So how does it all work?

Each turn players draw four cards plus one for each creature in play. One of these cards is placed face down in the watering hole. Then, in turn, the other cards are played. They can be used to:

The cards played into the watering hole are revealed next. The first thing that now happens is the climate symbols are totaled, suns and snowflakes, and the climate changes depending on how many of each there are.

If there are more suns it gets hotter, if there are more snowflakes it gets colder.  This creates new global conditions which may benefit or adversely impact some creatures more than others, these effects are immediately applied.

Play will then move on to the next turn, players draw more cards and the game continues. The game ends when the deck of cards is exhausted. The winner is the player with the most food and the greatest population.

The artwork on the cards is really nice. All components are good quality and highly thematic. The rules are clear and concise. The game adheres to high production values and the artwork matches the theme really well.

Evolution is a good game, Climate takes Evolution some steps further towards greatness. Play is fast and interactive, as the cards tell the story of creatures which either evolve and thrive or are consigned to the evolutionary record of dead ends.

The addition of Climate adds global factors that can be used to change the whole game.  No longer can that apex predator be so secure, especially if the climate swings towards an extreme, this adds greatly to the level of interaction and to the challenges and possible strategies facing all players.

Typically play takes around an hour, possibly slightly longer with six players, maybe less with two. Some believe that it's best with four players, others think it's great two player game, and I’ve heard good things about the game with any number of players.

The rules are simple and easy to learn.  The game is easy to play, has no nasty surprises, is not complex, but is amazingly deep with decisions to take at pretty much every point during the game. With so many options, and different combinations of traits, and climate factors, no two games are ever going to be the same.

Evolution: Climate is beautiful in theme and vision, as creatures play out their part in the evolutionary story - and to top this, it’s great fun.